Legislative Agenda: Patent Trolls May Be Addressed by Congress in 2016

There are two ways to look at 2016 from a political standpoint. President Obama will be looking for a few crowning accomplishments in the final year of his two-term presidential saga, and what better way to go out on a high note than to sign off on some bipartisan legislation?

If you listen closely enough, you can actually hear Republican eyes rolling.

The second path, espoused by pessimists (but ultimately more realistic) is that because a presidential election looms in November, not much is going to be accomplished. Campaigning will take the place of any actual legislation getting pushed through. There are a couple of items that are extremely likely to see activity post-election (more on this shortly) but, in the interim, the printing industry’s interests can be promoted on a couple of fronts.

As always, we turn to the printing industry’s leading legislative advocate/veteran lobbyist Lisbeth Lyons—the vice president of government affairs for Printing Industries of America (PIA)—for the lowdown on what hot button topics will be pursued during the weeks and months leading up to the presidential election. We will give you one agenda item per day—like a vitamin—to help (but not overtax) that heart of yours. 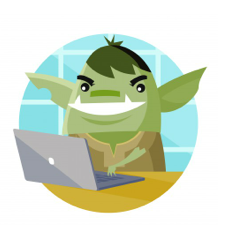 Step aside, postal reform. The printing industry has a new darling in the cause du jour department. We teased you last year with promises of a surefire bipartisan fix to the technology squatting but, once again, trial lawyers and pharmaceutical firms managed to throw up roadblocks on the path to a legislative solution.

A patent troll is like a cavity; given time, it will painfully remind you that it cannot be ignored. In November, a non-practicing entity called High Quality Printing Inventions launched more than 30 patent infringement lawsuits against printing businesses whose bread-and-butter workflow platforms are Web-enabled and customized. Angstrom Graphics, Deluxe Corp., Shutterfly, PrintingForLess and Cimpress (VistaPrint) were among the list of recipients of the infringement claims, filed only days before Thanksgiving. Nice touch.

Lyons points out that both the House and Senate have expressed interest on voting in the early part of 2016, and President Obama is already on record in favor of squashing the patent troll practices hampering companies of all sizes. “Big pharmaceutical companies, especially, have been blocking it because of the impact it may have on their patent business,” Lyons says. “Congress will pass something…I just don’t know how watered down it will be.”

The PIA is aligning itself with United for Patent Reform, a business lobby that is pressing lawmakers to take action on reform legislation (S.1137/H.R. 9). Senators Chuck Schumur (D-N.Y.) and John Cornyn (R-Texas) are both throwing their weight behind the cause. International issues in the second half of 2015 may have been the distraction that prevented a bill from realization last year.