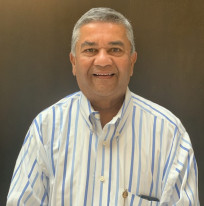 People who don’t like taking credit for the great things they’ve accomplished eventually find they can’t outrun the due praise and recognition everyone else wants to heap upon them. Just look at how a lifetime of being modest and self-effacing has caught up with Siddharth (Sid) Chinai, founder, chairman, and patriarch of King Printing.

Chinai’s name joins that roll of high honor for many reasons. But, chief among them is his renown as one of the early architects of short-run, on-demand book manufacturing with digital printing equipment. Industry peers agree that if Chinai didn’t invent the short-run book market, he helped define the best practices in technology investment and business management by which the market as a whole operates today.

“Sid was one of the pioneers of print-on-demand — one of the first people in America who explored the possibility of that,” Alan Wherry, a co-founder of Bloomsbury Publishing, and a former sales director for Penguin, points out.

“King Printing has always been at the forefront,” Jeff Jacobson, executive chairman and CEO of EFI, affirms. “They truly have competed with the giants of this industry.”

‘They Can Do Everything’

The success story that Chinai has made of King Printing — now under the direction of his son, President and CEO Adi Chinai — rests upon two strategic pillars: total responsiveness to customer requirements; and equal fearlessness about being first to try new technologies. Together, these traits have earned him a special reputation for leadership in the market that his company has come to symbolize.

King Printing is one of the few digital printers for whom it can be said, “they can do everything,” notes Dick Jensen, a former VP of manufacturing at Cengage Learning. Sid Chinai, he explains, always gave his customers “the ability to throw anything at him” and get results — unlike larger printers that only wanted work fitting their sweet spots of production.

Aurelio Maruggi, global head of owned channel at HP, worked with Chinai in bringing HP’s PageWide production inkjet web press systems to King Printing. He remembers the 2020 Hall of Fame inductee as someone eager to start “exercising the muscle of digital printing, and not waiting for the technologies to be proven in the market.”

If anything is key to the rise and staying power of King Printing, this undoubtedly is it. As Jacobson observes, “A lot of people don’t want to be at the bleeding edge. A lot of people like to be fast followers.” But not Sid Chinai, who demonstrated that embracing new technologies at the beta stage was the way to level the playing field with printing businesses many times the size of his company.

“For a smaller printer, he took a lot of risks,” recalls Frank Romano, professor emeritus, Rochester Institute of Technology, and proprietor of the Museum of Printing. He says that in the early 1980s, for example, Chinai was one of the first printers to use the Kodak Ektaprint Electronic Publishing System (KEEPS) to produce book blocks on-demand. Today, according to Romano, the company boasts “an array of equipment that is phenomenal.” 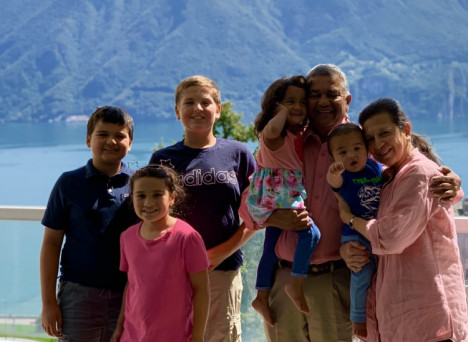 Sid and Amita Chinai enjoy spending time with their five grandchildren. The couple has come a long way from the early days when they opened KopyKing, a storefront copy shop in Framingham, Mass., with the help of an SBA loan.

Chinai’s own words on the subject are characteristically understated. “It’s just manufacturing,” he says. “The difference to us is the process, not the product.” He’s similarly low-key about his entry into the book business, claiming that early on in the life of the company, “we had to choose a niche, and books was our niche.”

Behind the unpretentious language is a story of vision, focus, and hard work in the best tradition of the Hall of Fame.

It began in 1978 when Chinai and his wife and partner, Amita, opened KopyKing, a storefront copy shop in Framingham, Mass., with the help of a loan from the Small Business Administration (SBA). He sold printing during the day, with Amita filling in at the store until he returned to print the orders at night. Their industriousness enabled them to repay the SBA loan within two and a half years, even though, according to Chinai, the agency wasn’t insisting on getting its money back.

Production in those days was analog, and once, recalls Chinai, the terminology of the trade led to an amusing misunderstanding. Having run an employment ad for a stripper — a craftsperson skilled in film-based prepress for platemaking — he was surprised when the notice drew a job seeker from the entertainment world who asked Amita, “Where do I dance?”

“Then we started calling it ‘film assembly,’” he says.

KopyKing had become King Printing by the time the couple relocated the company to its present home in Lowell, Mass., in 1990. By then, the thrust of the business was book manufacturing. Commercial printing, in Chinai’s view, required too much space and equipment, and there was more than enough commercial capacity in the marketplace already.

Chinai’s preference for short runs was also becoming clear. He realized that, “you could do a lot more, and make a lot more people happy,” by producing smaller quantities that wouldn’t “choke the plant” the way typical offset-printed orders might. Short runs also simplified life on the customer’s end by reducing the need for warehousing.

All of this would lead logically to digital printing, which Chinai began offering in 1988 with the installation of a monochrome device. He remembers it as a post-recessionary period in which tight budgets meant, “we were getting pushed into shorter runs. Everyone was buying less.”

By January of the following year, Chinai was operating the first Xerox DocuTech production publishing system on the East Coast. Soon, he had a battery of seven DocuTechs running three shifts a day, seven days a week.

With such tools, “we found ourselves very happy getting short runs,” Chinai says. A steady drumbeat of capital investment in digital solutions has marked the progress of King Printing ever since.

Among the more recent milestones were the installation of a Screen TruePress Jet520 continuous-feed inkjet press in 2008, and another inkjet platform, the Kodak Prosper 5000 XL, in 2010. That year also saw the installation of a SigmaLine digital book manufacturing system from Müller Martini, an OEM that continues to supply King Printing’s finishing needs. 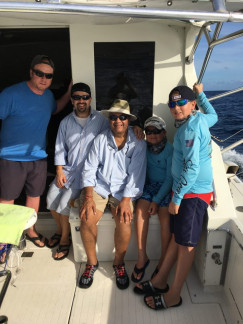 Led by family patriarch Sid Chinai (center), some of the members of the Chinai family enjoy a deep sea fishing trip.

The company’s most notable vendor partnership has been with HP, which sold Chinai his first PageWide inkjet web press, a T300 model, in 2010. King Printing now operates a fleet of PageWide platforms, all of which have been upgraded with HP’s High Definition Nozzle
Architecture (HDNA) — a technology that Chinai was the first print service provider in North America to adopt.

There is still some offset equipment for printing book covers, but apart from that, “the whole company is digital today,” Chinai says. “We are 100% digital in books.” Products range from casebound law books and academic textbooks to paperbacks in a variety of sizes and binding styles. The competitive space is runs of one, to volumes up to about 10,000, with orders of 1,200 to 1,500 copies as the average.

Many of the publishing industry’s best-known houses are longtime users of King Printing’s short-run services. Its Adibooks division offers smaller publishers and self-publishing authors not just short-run printing, but also advice about design, ISBN registration, marketing, and other bookselling basics.

Everything takes place under one roof in a plant that Chinai originally bought in Lowell. Close to completing an expansion to 100,000 sq. ft., it is home to a three-shift, 120-employee operation that ranked at No. 148 on the 2019 Printing Impressions 400, with $34 million in annual sales.

Chinai may not have had precisely this future in mind when he came to America from his native India in the 1960s. “I was a hippie, I guess,” he reminisces. Academically, he concedes, “I was a terrible student. I couldn’t sit still.” Nevertheless, once he completed his industrial training in Milan, Italy, he managed to land a job with a company that made cables for power transmission, his career in manufacturing was on its way.

One thing Chinai never felt even a twinge of uncertainty about was his devotion to Amita, his wife of nearly 50 years. He recalls meeting her through relatives at a country club and immediately announcing, “I want to marry that girl.” With Amita’s consent, he did, and both beam with pride about a family that includes son Adi, daughter Sejal, and five grandchildren (“the best part of anybody’s life,” Chinai declares).

His self-deprecating description of what he does at King Printing nowadays will startle no one who knows him. “I’m overhead now,” he says. “I come here, as I tell people, to drink tea and take my naps.” In fact, he actively consults with Adi and the rest of the team about emerging technologies and strategic directions for the business.

This keeps the father-and-son team visible — and influential — within the industry, especially among the vendor community. The pair “are always at trade shows, looking at anything and everything that would give them a production edge,” according to Romano, who is ubiquitous at trade shows himself. And, when the Chinais inquire, the OEMs pay close attention.

The Measure of the Man

“He (Sid Chinai) pushes you to think forward,” Frank Donnelly, regional sales manager for Müller Martini, says. Maruggi calls him “a great partner to HP” for helping the company learn how to win broader acceptance for inkjet printing.

This blend of matchless expertise and simple humanity is what endears him to people at the same time it commands their respect. “Sid is just a sweetheart of a guy to do business with, and he did run his business that way,” observes Jensen. “He is very much the gentleman, and always eager to please, as a vendor and as a person.”

When he reads these published words of praise from his well-wishers, the honoree probably will respectfully demur. But, he surely knows that Jacobson speaks for multitudes in the industry when he says of Sid Chinai, 2020 Printing
Impressions/RIT Printing Industry Hall of Fame inductee, “I couldn’t be more proud to be his friend, or more honored to have him as a customer of mine.”