At a time when the printing industry is searching for new growth and development opportunities, it now faces new obstacles: patent trolls, the epitome of greed, thoughtlessness, and unethical behavior impacting the survival, growth, and development of printing and related companies.

What is a Patent Troll?
A patent troll is a company or person that purchases a patent and then sues another company claiming that the use of one of its products infringes on the purchased patent.

Trolls attempt to enforce patent rights against alleged infringers far beyond the patent's actual value or contribution to the technology or the industry that the patent represents. Patent trolls typically do not manufacture products or provide services based upon the patents in question. They use patents as "legal weapons," instead of actually creating any new products or coming up with new ideas to improve business, commerce, or society. Trolls are in the business of threatening and creating litigation.

Further, trolls often buy-up patents cheaply from companies that are looking to monetize patents that have little or no value, or should have not been granted to begin with, because of Prior Art demonstrating that what the patents teach was obvious prior to the time of application for the patent. These patents are subject to an invalidity contention and termination by the United States Patent & Trademark Office (USPTO) when alleged infringers contest the trolls. They are typically very broad, covering generic or well-known types of applications that should never have been patented to begin with.

In possession of these broad and vague patents, the troll then sends out intimidating letters to those they argue infringe on their patents. It is a scare tactic that preys on innocent companies that are merely providing a service needed by society. These letters threaten legal action unless the alleged infringer agrees to pay a licensing fee, which can often range to the tens of thousands or even hundreds of thousands of dollars. Many who receive infringement letters will choose to pay the licensing-fee out of fear, and because patent litigation is extremely expensive and can involve lengthy and time-consuming court deliberations.

So What is the Troll Issue in the Printing Industry in the United States?
Printing Industries of America has been attempting to bring the patent troll issue to the forefront so the printing industry understands what it is facing today and will likely face on an increasing basis in the future unless Congress does something to change the situation.

I recently contacted several present defendants and those who were already sued and opted to settle out of fear and intimidation to find out the tactics being used in the litigation campaign in the current batch of patent trolling cases. I focused on two highly visible collections of cases involving patents purchased by two shell companies: CTP Innovations (CTP) and "(HQPI). A shell company is a business entity having no employees or contact information, only a referral to an attorney, but owned by an unnamed parent company.

Due to the sensitive nature of the information requested, and agreements that have been reached in some cases, anonymity was promised. Some companies declined to participate out of fear of reprisal unless anonymity was assured. Others were fearful of providing specific responses to some of the questions due to confidentiality promises made when "deals" were given by the trolls.

How the CTP and HQPI Patent Trolls Have Impacted Specific Companies in the Printing Industry — What Impacted Companies Have To Say
Here are some examples of the havoc that these patent trolls have caused in the printing industry. Such disruption is not only to printing companies of all sizes, but to Original Equipment Manufacturers (OEMs) and equipment distributors as well.

One company officer said that when informing the OEM about being sued, he was told that the patents in question:

"…could not stand since it’s targeting [a] very broad application of what software and web technologies can do for [the] print and publication field." He said, "…because they now have to defend themselves, they are dedicating resources that are better served for day-to-day operations and for the advancement of the business. As such, this is a waste of resources compromising the ongoing success of the company…We are halting all investments that we believe may be included in future litigation until we come up with a plan to protect our interest or are satisfied with [the] resolution of this case and its future impact."

He went onto say, "Unfortunately, patents are being misused and the task of correcting the system that enabled the deterioration of innovation and consumer choices is not an easy one but we must start somewhere."

"We believe this patent lawsuit to be frivolous, and the abuse of our legal system by patent trolls hurts consumers. This along with other frivolous suits stifle competition, hurt consumers, and bully innovative companies."

When asked if he had any idea who was behind the shell company and benefiting financially, he identified RR Donnelley as the "affiliate." However, RR Donnelley claims that the patents in question were previously sold, and the company has no ownership interest in the patents and receives no licensing payments. RR Donnelley’s more detailed response follows.

The officer of another company wrote that the alleged patent infringement lawsuit served on them said that they are in violation of numerous patents, and it went on to name them one by one. The company principal went on to say, “Essentially, we were being sued for a practice most every printer in the industry utilizes.”

His company was asked to pay a license fee in excess of a six-figure amount.

In response to a question on the impact on the company, the company principal noted,

"First, it’s been financially draining and secondly a distraction to running a business on a daily basis. It has affected the morale of the company in an adverse way… Patent trolls are greed mongers who use the tactics of fear and ambiguity of certain patents to intimidate small companies to settle upfront and [the trolls] use these proceeds to continue that pattern of behavior."

Yet, a letter from another company noted, “If you are a printer then you are highly likely to be sued for $100k to $300k soon,” referring specifically to RR Donnelley as the accuser working through a patent troll, CTP Innovations. The letter continued, “They are suing the printers first… RR Donnelley is now going after the printers’ vendors... I have never felt such injustice in my life in going through the process that RR Donnelley has put me through.” Again, the perception was that RR Donnelley, as the previous owner of the patents, is responsible for the infringement lawsuits being imposed on printing companies. As will be noted later, RR Donnelley explains this misperception.

I received a phone call from a young lady running a small design studio with her husband. She was nearly in tears with fright after receiving an intimidating letter threating a lawsuit if a licensing fee for a small piece of equipment and its application, commonly used by graphic artists, is not paid.

The scenario of patent troll intimidation is being repeated across the industry. When exploring attorney assistance in these matters, the companies threatened or sued are learning that attorney fees, often starting at approximately $250,000, can be even greater than the license fees being requested. Hence, they are “between a rock and a hard place” and some have paid the trolls out of intimidation and fear.

In exploring whom these troll “shell” companies are, most of the accused allegedly infringing companies did not know because there are no individuals named or contact information given such as street addresses, phone numbers, etc., only contact information for the attorneys representing the trolls. However, the officers of two of the companies sued suspected that they were set-up by the RR Donnelley company, as a means for collecting license fees from printers, equipment manufacturers and distributors, and from related companies.

My impression was that RR Donnelley had sold these patents, certainly a right that they had, and had relinquished any financial interests in them. However, in digging deeper into Corporate Disclosure Statements as part of public documents filed with various United States District Courts, the RR Donnelley name did appear as a company “…having financial interests in the outcome of [these cases.]”

The following is one example: 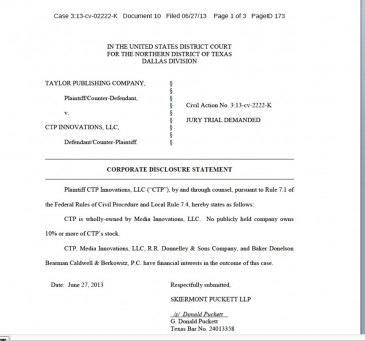 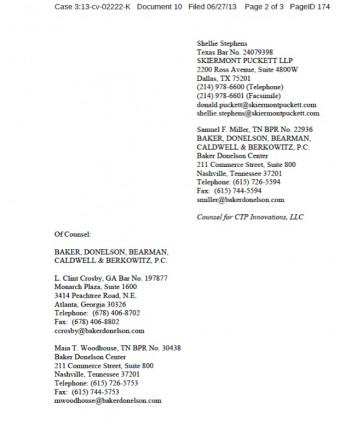 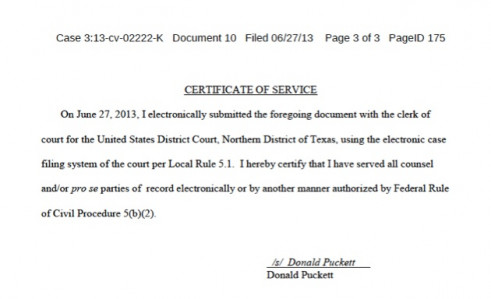 This was a surprising finding, considering that RR Donnelley, as one of the largest commercial printing companies in the world, was perceived by the companies being threatened or sued to be operating as a troll and exploiting resources from companies within its own industry through fear and intimidation tactics.

Recognizing that RR Donnelley is a long-standing highly respected company within the printing industry, and as an advocate for the industry, I contacted the company for an explanation. This provided RR Donnelley the opportunity to explain any misunderstandings, if there were any, regarding the company’s ownership of the patents and financial interests in them.

RR Donnelley’s Response
In a response to a letter requesting clarification of the patents sold to CTV and HQPI, RR Donnelley provided the following authorized statement.

“RR Donnelley would like to provide feedback…to clarify some apparent misunderstandings regarding the three HQPI and CTP patents that you reference in your letter (the 'Patents').”

The companies impacted by the lawsuits imposed by the patent trolls alleging infringement feel torment, fear, and intimidation. Many have never been faced with lawsuits and are inexperienced in knowing how to deal with the matter. Most cannot afford to hire legal counsel and some are small companies attempting to provide a reasonable living for their employees. The sense of many defendants is that if there is valid infringement, it is the original equipment manufacturers (OEMs) that should be held liable, not those to whom the equipment was sold. At best, the three patents are marginal because Prior Art likely exists that was not presented to the US Patent & Trademark Office (USPTO) examiners at the time of patent application.

Recommendation
Printing and related companies sued by patent trolls should not settle by paying the fees requested and should not enter into a single-company litigation that can cost even more than a settlement. Giving in to patent troll license fees or other demands will exacerbate the problem and encourage additional intimidating and threatening lawsuits in an attempt to extort funds from companies doing honest and legal business, and working hard to survive and grow, and provide employment opportunities for skilled staff members.

I am proposing that a solution is bringing together all of the companies for which a lawsuit has been filed by patent trolls, and to work as a unit in bringing the matter of alleged patent infringements before the US Patent & Trademark Office (USPTO). It is likely, for example, that the patents in question referenced in this article can be invalidated via Prior Art.

This article was not sanctioned or funded by any university, private or public company. It is meant to educate and inform on a matter that is negatively impacting the growth, development, and survival of companies in the printing and related industries, Original Equipment Manufacturers (OEMs), and equipment distributors.