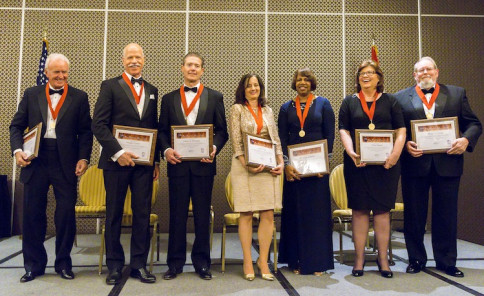 The Ben Franklin Honor Society of PIA is comprised of industry leaders who have made lasting contributions to advancing print and graphic communications. Inductees have rendered outstanding and/or meritorious service to associations such as PIA, its affiliates, the Print and Graphics Scholarship Foundation (PGSF), and the industry.

For the past 24 years, Conley has been part of the Professional Printers Company (owned by Loxcreen Company) in West Columbia, S.C. In 1993, Conley and two other associates purchased the Loxcreen Company and have strived to make it one of the largest commercial printers in the Carolinas. It has been said that Conley, as the CFO of Professional Printers, oversees the company’s financials like a hawk and is relentless in his strides for customer satisfaction.

Twyla D. Cummings has been described as an innovative, creative, energetic, analytical, and articulate leader, earning the respect of her colleagues at Rochester Institute of Technology and among professional associates. In 2015, she was recognized for her contributions to the print industry and received the Naomi Berber Award.

Cummings’s commitment to the print industry includes seminars related to binding, finishing, and distribution for the former National Association for Print Leadership; membership in mailing and distribution committees; and teaching courses in digital print marketing and media distribution. As an awardee of the Paul & Louise Miller Distinguished Professorship, she worked to establish the (Newspaper) News Media Initiative and its website, and the Paul & Louise Miller Lecture Series.

Douglas J. Grant is known for his vision, passion, and dedication to providing world-class service and quality in the printing industry and in his community. He’s held leadership positions in his local affiliate, Printing Industries Association of Southern California, and has served on many of its committees.

Most recently, Kahanec was presented as one of OutputLinks’ Women of Distinction and was Printing Industries of America’s recipient of the Naomi Berber Memorial Award. She was named the Florence Joachim Woman Executive of the Year for 2006 and was also a recipient of the Luminaire Award in 2007. As a motivated activist, Kahanec’s charitable contributions include her involvement with many industry scholarship funds.

Susan P. Nofi is the senior VP, human resources and general counsel for Heidelberg USA in the Kennesaw, Ga., headquarters. She has spent countless hours dedicated to the print industry through her involvement with SkillsUSA, which promotes vocational development in the industry, as a board member for the Printing and Graphics Scholarship Fund, as an officer of the Accrediting Council for Collegiate Graphic Communication, and also as an advisory board member for CalPoly Graphic Communication School. She has spoken at numerous symposiums regarding women in print and continuously provides pro bono professional services to nonprofit associations in the industry.

Nofi has been instrumental in crafting environmental policies for the Heidelberg group by coordinating with governmental agencies on regulations affecting the print industry.

William D. Prettyman is the President/CEO of Wise, with five manufacturing plants headquartered in Alpharetta, Ga. As a fourth-generation printer, his journey began in 1980 as he learned the business and moved through various departments while being mentored by David Wise, the founder of Wise. Later, Prettyman led the startup of its Fort Wayne, Ind., operation in 1981 and the Alpharetta, Ga., operation in 1985. He attributes Wise’s success to its ability to create and sustain a culture that serves its people and customers as its primary purpose.

Prettyman has been involved in serving the industry’s certification program as a part of the Print Services and Distribution Association (PSDA). He served on the PSDA Board from 2005-2013 and served as its President from 2010-2012. He received the PSDA President’s Award in 2013 and the PSDA Member of the Year Award in 2014.

In 1970, Shorett started as a partner of Crown Printers in San Bernardino, California and by 1973 became the sole owner. Growing with the changing industry, he was able to advance and expand his litho capabilities and sustain a reputable company, now offering the latest technology in digital/variable-data printing, finishing, and mailing.

For more information on the Ben Franklin Honor Society, including historical documentation and bylaws, visit www.printing.org/honorsociety.