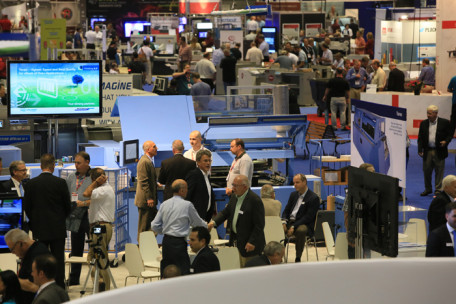 Although attendance was lower than in Chicago, several exhibitors reported a strong turnout from the Southeast and Latin America.

It had been more than 20 years since Graph Expo graced a city other than Chicago, but that streak came to an end during the final weekend of September as the Orange County Convention Center, in Orlando, Fla., opened its doors to the annual printing trade show extravaganza.

While the final attendance numbers were not available at press time, on-the-floor reviews were mixed. Still, that didn’t stop a bevy of printers from the Southeastern United States and Latin America — many who typically would not attend Graph Expo in Chicago — from enjoying a fruitful experience. Some printers left Florida with more than a suntan and Mickey Mouse ears. Whether it’s closing previously negotiated deals, or getting an in-person glimpse of a popular or emerging technology, Graph Expo continues to satisfy a need, regardless of the scenario.

The show had several variables working against it from the get-go. Obviously, with 2016 being a drupa year, some of the heavy hitters among U.S. printers traveled to Düsseldorf, Germany, to inspect the latest in prepress, printing, finishing and software offerings. And, on the exhibitor side, drupa ate up many vendors’ 2016 marketing budgets due to the large exhibits and overall length of the show, which left less dollars that could be allocated to Graph Expo. Florida, it was also presumed, would not have the geographic drawing power or the traveling convenience that Chicago boasts. Finally, with Labelexpo Americas and the SGIA Expo scheduled within two weeks of Graph Expo 2016, it would reduce Graph Expo’s attendance base.

Chicago’s McCormick Place is a grizzled veteran when it comes to hosting trade shows, having staged a laundry list of events for a wide variety of industries. But truth be known, the Orange County Convention Center did a better job for Graph Expo. The layout is crisp, centralized and straightforward, and attendees didn’t need to walk great distances to sit in on seminars and other presentations. The show floor was but a stone’s throw from the front door. At McCormick Place, it’s the equivalent of about a $10 cab ride from the cab and bus dropoff areas to the exhibition hall itself.

The obvious drawback is that Orlando, as a host city, pales greatly in comparison to downtown Chicago, which has a rich heritage of top-notch restaurants, plush hotels and unparalleled night-life options. Orlando really isn’t a drawing card for anyone other than families trekking to Disney World. Convenience is not in that town’s vocabulary.

A number of vendors polled liked the lower hotel rates and the more economical outlay demanded for setups and teardowns, given that Florida is a “Right to Work” state. One longtime exhibitor felt it would also be a good idea to extend Graph Expo’s reach to destinations such as Las Vegas and Dallas (assuming suitable exhibition hall dates were available), which may have more success with drawing in printers from those regions. Incidentally, the show is currently slated to return to Chicago for PRINT 2017 before bouncing back to Orlando the following year.

On the whole, the experience of a printer attendee at Graph Expo 2016 ultimately hinged upon what he/she hoped to take away from the visit. We have several samples of printer encounters during the Orlando Odyssey that prove, beyond a shadow of a doubt, that regardless of the when and where particulars, business will get done.

That certainly holds true for Keith Kemp, president of Xerographic Digital Printing, who journeyed to Graph Expo all the way from ... Orlando ... to pick up a bit of hardware his company desired. The 30-year-old firm, which debuted as a copy shop, is now one of the city’s largest print providers, serving clients from the hospitality and tourism spaces with items such as pocket folders, binders, agendas, posters, direct mail and other short-run, on-demand products. 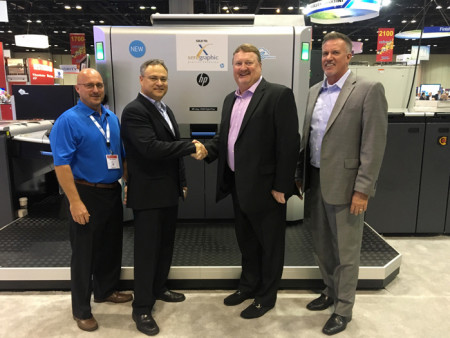 Kemp is always on the lookout for any technology that will enable his employees to say “yes” to their clients. However, Xerographic’s executives were torn between a pair of digital press options: either two HP Indigo 7800s or one HP Indigo 12000. In the end, the HP Indigo 12000 and its larger format won the day, capping a six-month vetting process.

“As we were looking at available equipment in the marketplace, we landed on the 12000 for a variety of reasons,” Kemp says. “The press features outstanding print quality, the largest digital sheet size and unique ink colors, including white, which opens up some interesting marketing opportunities.

“Its high-quality output also allows us to go deeper into marketing organizations. We produce a lot of training materials, where color had been requested, but sometimes proved to be cost-prohibitive. Now, we can do color and black-and-white, all on one platform.”

Xerographic Digital Printing finalized its decision in late August and saved the official signing ceremony for Graph Expo to acquire the HP Indigo 12000 that was on display in the HP booth (see photo).

One printer who had no qualms with the Orange County Convention Center is Wayne Welkner, co-owner of commercial shop J&J Printing in Lenexa, Kan., which offers a wealth of corporate identity pieces and other printed services. Welkner, who attends Graph Expo on an annual basis, was browsing color digital printers and looking at various coating options.

The advantage of doing business 20 minutes outside of the Kansas City market is being three hours away from just about anywhere, Welkner enthuses. “But I do kind of miss the Chicago atmosphere, where the restaurants and bars were in walking distance,” he says. “But I think the (Orange County) facility is adept for what’s become the size of the show nowadays.”

Welkner’s stay was brief — he arrived Sunday, departed the next evening — but profitable. The company, which produces a large amount of marketing flyers and postcards (a RYOBI UV LED press is its go-to production weapon), is looking to make a move on a digital press by the end of 2016.

One printer who didn’t decide to attend Graph Expo until the eleventh hour was Bruce Shulman, president of Paducah Printing, headquartered in the Kentucky town of the same name. Tempted by the educational sessions on valuing a company and succession planning, Shulman found what he felt was an affordable plane ticket to Orlando on Saturday morning.

In past years, he would hop into his car and make the six-hour drive to Chicago. In that regard, Shulman felt a little out of his element, and the show seemed long removed from its salad days of yesteryear, where little could be heard over the din of the rattling sheetfed offset presses on display. Ironically, one of the few pieces of offset printing machinery on display at this year’s show — the RMGT 9 series press — was recently installed at Paducah Printing. The press is strictly LED-UV with a single economical lamp that cures five inks and UV coating, all in one pass.

“It seems like the days of Heidelberg having 10,000-sq.-ft. booths at Graph Expo are long gone,” he says, wistfully.

While the exhibition may not be what it once was in Shulman’s eyes, he was drawn to Orlando not only by the educational seminars but the opportunity to view some wide-format banner printing solutions up close. He was also window-shopping for a possible Web-to-print solution.

Investigating Production Inkjet
Lawrence Chou, CEO of San Diego-based MGX Copy, is an admitted technology aficionado, and is drawn to the idea of seeing and touching the machinery in-person. Much of MGX Copy’s focus in recent years has centered on production inkjet, cut-sheet digital toner and software solutions. Digital toner has been a go-to technology, reliable and quality driven, which has benefited the printer. Software targets included throughput and efficiency enhancement tools. Inkjet adoption, Chou notes, remains in the research phase for MGX Copy.

“I’ve always looked forward to attending the show in Chicago every year, but that is more for extracurricular reasons than for business purposes,” Chou points out. “From a business perspective, Orlando put on a great show. The major vendors were still there and, if anything, it gave me a better opportunity to have one-on-one conversations about machinery and solutions. Personally, I think that having the show change locations — much like many other conventions — may actually be a good idea. It will help to draw a different audience and increase the potential customer base. There are a lot of competing trade shows now, specifically SGIA, and I think they gain more exposure by keeping the locations fresh.”

Over at the Muller Martini booth, a cast of representatives entertained a contingency from the Government Publishing Office (GPO). Greg Estep, the deputy managing director at GPO and a seven-year veteran of the in-plant, notes that his large operation is always on the lookout for equipment that can provide lower cost production and higher efficiency levels.

“We brought a team of managers, which allows us to have face-to-face conversations with multiple vendors and learn more about industry best practices,” Estep says. “We recently invested in our bindery operations, replacing older technology. It’s really going to save us in terms of waste and shorter production times.”

Estep found a few items on the show floor that really captured his attention, including solutions to enable quicker changeovers in the GPO’s envelope operations. He was also looking at inkjet options to shore up label printing technology on the mail line. In the short-term future, Estep will be checking out MIS technology to bolster the shop’s dynamic scheduling capabilities and to enhance shop floor data collection.

“We want to replace existing legacy systems so we can better monitor and manage production,” he says. “The best part about coming to Graph Expo is the educational opportunities. I just love learning about new technology.”

Suffice to say, Estep came to the right place.