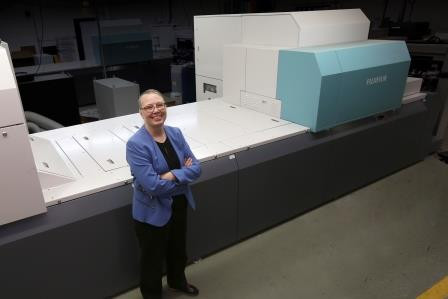 Pocket Folders Fast is a division of a broader group of companies, Wright Printing and Barnhart Press. Being a commercial printer allows this group of companies to provide services to a broad range of clients, including the niche of pocket folders and short-run digital packaging.

“Wright Printing is the umbrella company, started in 1927 by my grandfather,” said Mark Wright, owner, Pocket Folders Fast. “We recently entered into a partnership with Barnhart Press, and have started our presentation folder company, Pocket Folders Fast, and will soon begin our short-run folding carton division.”

Meeting the needs of their clients was a driving force in their investment of not one, but two Fujifilm J Press 720S’s.

With a half-size format and a production speed of less than one second per sheet, The J Press 720S opens up new prospects for any short-run, general purpose commercial print; for a couple sheets or several thousand.

The J Press 720S allows PSP’s to compete for more of their customers’ branding business by dramatically lowering operational costs and reducing turnaround times – all while boosting offset-quality color consistency throughout the run.

“In the past we’d have to run one in front of the other and try to match them on offset,” said Wright. “Now I can run them simultaneously on two different machines and get the exact same results. We felt that the J Press would be the exact machine we needed because of the ability to do 5,000 sheet runs and less at a very low cost point.”

“Uptime is fantastic,” adds Andy Cowles, digital department manager, Pocket Folders Fast. “The J Press uptime has been something to the effect of 99.8 percent. The color quality and consistency is second to none. We can run a job today, and then another job tomorrow and the same job three months from now, and it will be the exact same as it was when we first ran it. Sheet to sheet, job to job, consistency is unbelievable.”

“It will allow us to produce directly from the website, short-run folding carton jobs and produce on one or both of the J Presses,” said Wright. “We’ve had this website in our pocket for several years, but it just didn’t work on offset; and I don’t think it would have been possible without the J Press. Being able to go directly from the website to the J Press, it’s going to cut out costs significantly, and make our turnarounds faster.”

“The J Press allows us to do two things to stand out from the crowd,” adds Wright. “One is, of course, the short run capability. In my opinion, from zero to 2,000 copies I own the world. The other thing it does is the variable print aspect. We’re running a lot of different skews of the same size package, and we can run them in order without any stop, without any change, and they come out perfect every time. And in packaging, that’s a great savings.”

Pocket Folders Fast has a national client base, and they are a frequent exhibitor at industry trade shows across North America.

“We don’t have an opportunity to always meet our customers face-to-face,” said Sikora. “Our best opportunity to see them is at conventions. That’s where we’ve used the J Press technology and variable data to show people what this capability is, and to really get their own ideas pumping on what they can offer their customers.”

Resource savings, Labor savings, and increased output with the J Press 720S.
“With the two J Presses, we’re in a very unique situation,” says Cowles. “I can easily power through 30 or 40 jobs in a shift. Easily. We’re not waiting for jobs to dry or cure before we’re finishing them, allowing for 24 hour production.”

“We are constantly running folders at the level of 100 and 250, daily, and it’s worked well for us because no plates, no waste,” said Wright. “Got to love it.”

Concludes Wright, “I’m often asked how the J Presses have transformed my business, and I guess that’s hard for me to answer, because they didn’t transform my business, it’s the reason I got back into the business.”