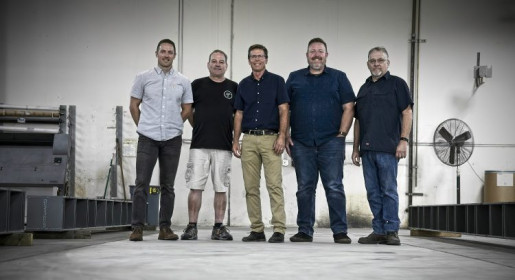 PJ Printers in Anaheim, Calif., is continuing its decades-long tradition of growth with the installation of an eight-color Komori Lithrone G40P (GL840P) with LED. The company’s relationship with Komori spans three decades and the new press will work alongside a six-color Komori Lithrone S40P.

Owner Jeff Lane founded PJ Printers in 1983 and, at the start, he was the company’s sole employee. Lane grew up in the business, working for his father’s printing firm and others until deciding to launch his own company. Working directly with adverting agencies, as well as with brokers, he gradually built the business through word-of-mouth referrals and by acquiring other smaller firms that helped grow his customer base. Today, with approximately 100 employees, PJ Printers offers everything from creative design and point-of-purchase (P-O-P) displays, to all things commercial print, diecutting, bindery work and mailing services. The company works for a wide range of impressive customers that include the Los Angeles Dodgers baseball team and notable firms in the recording industry. PJ Printers has won seven Benny Awards for the quality and complexity of its diverse products.

Along with being the productive workhorse the company needed to keep up with its increased workload, the  Komori GL840P offers the versatility required to support PJ Printers’ growth initiatives that involve entering into new markets. Its ability to accept a wide variety of substrates, along with the special effects the LED UV curing allows, Lane notes he can add an even higher level of value-added printing to the company’s already innovative portfolio to produce a range of eye-catching P-O-P displays that require the use of thick, non-absorptive, synthetic substrates.

“Years ago, it used to be that you offered customers a choice of price, service or quality, and they would pick two of those three and be happy,” said Lane. “That is no longer the case. Customer expectations are high and you need to give all three to be competitive and to keep customers happy.” Lane attributes the success of his company to his view of being a servant to his customers and he urges his employees to take the same view to consistently produce the best work possible.

Lane expresses his appreciation for the support Komori has given his company through the years: “We have a strong partnership with Komori. We have been able to expand our business with their reliable presses and, more importantly, their continued support over the years.”

“We are pleased that we’ve been able to offer PJ Printers what it needed to grow its business in such an impressive way,” said Mark Milbourn, executive vice president, sales and service, Komori America. “PJ Printers has been part of the Komori family for many years and we are excited that its new GL840P with LED will provide the advanced capabilities needed to expand even further in the future.”