PIA Announces 2020 Slate of Officers and Board of Directors

Printing Industries of America (PIA) proudly announces the election of its 2020 slate of officers and board of directors. The installation ceremony took place on Nov. 17, 2019 at the PIA Fall Administrative meeting held in Houston, Texas. New board members inducted during the ceremony were: Teresa Campbell, Printing & Imaging Association of MidAmerica and Skip Novakovich, Esprit Graphic Communications. Additionally, new board members Brad Eslick, Record Printing Company; Gary Matchinsky, BCT; and Doug Climie, Hemlock Printers also join the board. The new officers of the board of directors are as follows: 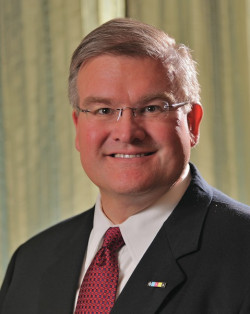 Chairman of the Board—Paul Cousineau

Paul Cousineau assumes the helm of Printing Industries of America’s board of directors in the role of chairman having previously served as first vice chairman and research committee chairman. In this capacity, he will help guide the organization through service on the executive and finance committees and participate in numerous national and regional events throughout the coming year.

Cousineau’s experience spans nearly four decades in the printing industry, including more than 35 years with Dow Jones where he now acts as vice president of prepress operations, continuous improvement, and IT ops support. He primarily works on production of Dow Jones’ printed products from receipt of image through the finished paper. He has been a key executive in developing Dow Jones’ quality control program while managing all systems and functions related to production including plant expansion projects, continuous improvement, and maintaining a connection with the industry and education.

He also serves on the Graphic Communications and Journalism Advisory Boards at California Polytechnic State University in San Luis Obispo and is a board member of the Technical Association of the Graphic Arts (TAGA).

Michael M. Marcian rises to the second vice chairman position on the board of directors executive committee this year. He is also the current chairman of the education and marketing committee.

Marcian is the CEO of Corporate Communication Group, formerly Corporate Press of Lanham, Maryland, which serves the Greater DC Metro area. Michael is a graduate of the University of Maryland, Robert H. Smith Business School and began his business career with Corporate Press. He rose through the ranks to assume complete command of the operation through an orderly transition process. During that time, he worked closely with his father and former PIA board chairman Michael Marcian, Sr. and an employee team of more than 150 to achieve his ultimate goal of following in his father’s footsteps to lead Corporate Communications Group.

Roger Chamberlain rises to the position of second vice chairman/secretary. He is a past chairman of Printing Industries of Ohio • N. Kentucky and current active member of the Graphic Media Alliance serving the same region.
Chamberlain is the assistant vice president of Administrative Services & Facilities at The Cincinnati Insurance Company. Chamberlain oversees the company’s in-plant print operations, data processing, mail operations, record keeping, and supply/procurement. He has been with the organization for more than three decades, having risen through the ranks from corporate print center manager to director to his current position.

John LeCloux continues as a board officer in 2018 in the role of organization treasurer. In the past, LeCloux also served on PIA’s finance committee and has been actively involved in his local affiliate, Great Lakes Graphics Association.

For over 20 years, LeCloux has acted as vice president for WS Packaging Group headquartered in Green Bay, Wisconsin. Before his current position, LeCloux was the owner/CEO of Dau LLC for four years and held many positions for RM LLC (formerly Republic Dau and Midwest Wallcovering) between 1982 and 1994, including chairman/CEO, controller, and accountant.

Bryan T. Hall served on PIA’s board of directors for a number of years ascending through the officer ranks. Before becoming serving two terms as chairman of the board, he served as the chairman of the Education Committee, participated in the Executive Committee, and acted as a member of the PIA Finance Committee. Hall also served on the board of directors of his local affiliate, Printing Industry of the Carolinas, Inc., for more than ten years, including a term as chairman.

Hall founded Carolina Duplicating in 1985 with his father, Tom, and the organization quickly grew to become Graphic Printing Services by 1988. Hall now holds the position of CEO at the organization, which is considered one of North Carolina’s top printers. He also serves on the North Carolina A&T State University Print Advisory Board and Greensboro Sports Council.