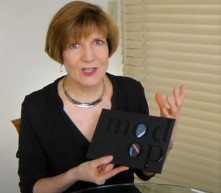 With its sleek black look, sculptured embossing, and die cuts revealing what appears to be colorful circuitry inside, this piece looks less like a brochure for a high-end marketing firm and more a mysterious artifact from the future. And that’s just the envelope.

Though Mod Op’s offerings extend from overall strategic services to video and web-based games, when the marketing company wanted to convey their abilities in a format that “felt premium,” they turned to the look, feel and sense of authority that only print can provide. And in DataGraphic they found a partner that’s been pushing the print envelope for years.

And the envelope is an excellent place to begin here. Starting with 122 lb. Black Neenah Plike, DataGraphic added Mod Op’s logo as a sculptured emboss, highlighting it even further with a spot gloss UV coating, then die cutting two round windows in the O’s. These give us a tantalizing glimpse of the contents inside.

On the flip side of the envelope are the words “What’s your M.O.” screen printed White, as well as a button & string closure which holds everything closed.

In a move that communicates a keen eye for detail, the buttons are not only made from the same Plike paper, but the right flap of the envelope has also been folded over and glued to create a double-thick flap that also happens to conceal the rivet holding the button in place. Everything here is clearly designed to physically reflect the premium quality of the company’s work.

Opening the envelope reveals it to be an Iron Cross fold, albeit one where only two of the panels are the same size or shape. The largest panel – the inside front cover - features an honor roll of the company’s biggest clients screen printed in White ink.

Deeply sculpture embossed on 100 lb. Neenah Classic Crest Solar White Eggshell Cover are the city names in which Mod Op operates, the company’s website digitally printed in a rich Black below. The embossing area here is exceptionally broad and deep so DataGraphic had to take a exceptional care in creating this effect, for which they used a special proprietary mounting technique.

Removing this piece from the envelope reveals that it is, in fact, a bi-fold with a short cover. Inside, instead of finding the reverse debossing from the embossing on the cover, I’m met with a digitally printed list of the many services the company provides. How did they circumvent the debossing look? The team at DataGraphic cleverly duplex laminated the embossed outside to another sheet inside that not only hides the bruising but makes for a piece that feels enticingly chunky, furthering the impression that Mod Op is a brand with gravitas.

Beneath this card are 5 postcards digitally printed on 120 lb. Neenah Classic Crest Solar White Eggshell Cover using an HP Indigo press. Each features a short client case study on the back, complete with a QR code that whisks the recipient to a more in-depth look at that particular project online. As a finishing touch, each postcard features a hot foil stamped Mod Op logo in the top right corner.

Turning the card over reveals photography from that same project, which showcases the breadth and quality of the company’s work. Mod Op aimed to intrigue rather than overwhelm, and succeeded.