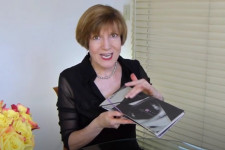 As graphic designers we live for those rare occasions when a client embraces our off-kilter view of the world, saying: “Design what you like – just make it unforgettable.”

No problem, said William “Bill” Milnazik, founder of design and marketing firm Axis Visual – creating for Crown Vantage a stunning promo for their Graphika line of recycled papers. It came at the topic from a wholly unexpected angle – a 45 degree angle to be exact.

One of the things I love about this promotion is the way it reminds me of just how experimental paper companies were when it came to marketing their products to designers back in the days before the Internet.

In 1998 when this piece was produced, recycled paper wasn’t as widely used by designers as it is today. That being the case, Crown Vantage asked Axis Visual to make the promo “loud” and “in your face,” showing off several different Graphika papers while doing so.

Taking “Voices” as the publication’s theme, the designer explored the different ways people communicate. Steckel Printing laid down 13 colors in all – some pages were printed CMYK and spot, others spot color only. In the process, they tapped into the grungy aesthetic of the day – think David Carson’s work for Ray Gun Magazine and some of the comic artwork of Dave McKean.

But to REALLY get in designers’ faces, Axis Visual had one more trick up their sleeve.

ON THE CUTTING EDGE OF BINDING

For a number of years Bill had been thinking about using a 45-degree fold in his work; now he finally had the opportunity to do it. The first challenge was simply laying out text and images at such an unusual angle. Next came the obvious question: What kind of binding do you use to accommodate an angled fold?

Though he initially planned to use rivets to keep the pages together, costs soon nudged him in the direction of something even more inventive: threaded metal rods, Black rubber bands, and notches die cut in the edge of the sheets. Initially it seemed the perfect solution, though each page had to be scored 1/16th of an inch more from the previous one so the book could open up correctly.

Yet no sooner had the first books been bound by Phillips Graphic Finishing and sent out for distribution than they hit their first major obstacle. It turned out that though they had done their best to clean away the preservative that coated the rods, unseen remnants of the chemical actually dissolved the rubber bands. So back the promotions went, where they were rebound with thin, solvent-proof O-rings instead. Problem solved!