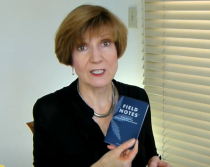 While print customization on digital presses has been around for a while now, the way it’s used to make one-of-a-kind packages and promotions often feels gimmicky – customization for the sake of it. That’s not the case with these “Snowy Evening” pocket notebooks. Using cutting-edge coding software – and an adventurous designer – Field Notes was able to create 99,999 notebooks, each with a different, utterly unique snowflake on its cover.

Inspired by research into the physics of how ice crystals are formed in the natural world, artist/designer Brendan Dawes (http://brendandawes.com/) initially fired up Houdini, a powerful coding application used in CGI and VFX, to create those snowflakes based on changes to different parameters of the same original illustration.

Soon realizing that producing nearly 100,000 of these illustrations as 3D rendered artwork simply wasn’t feasible from a time or money standpoint, he decided instead to work with flat 2-dimensional line art generated from the original 3D version. The resulting illustrations he then gave a softer, more organic feel.

In addition to the minutely detailed rendering of a different snowflake, each cover is also numbered like a limited edition piece, even though the “limited edition print run” in this case is 99,999.

If this all sounds like an overly simplistic explanation of a complex process, that’s because it is. The behind-the-scenes details include terms like “Voronoi triangulations” and a “procedural dependency graph.” One thing’s for sure: Nearly 100,000 unique snowflake covers amounts to one inspiring blizzard of creativity. (Intrigued? You can still pick up the “Snowy Evening” notebooks right here https://fieldnotesbrand.com/products/... while supplies last.)