OFFENBACH AM MAIN, Germany — May 11, 2017 — Fleetwood-Fibre Packaging & Graphics is known for stirring the hearts of brand owners alike for its unique package designs and exquisite attention to detail.

When the demand of its client base required it seek additional production capacity, Fleetwood-Fibre looked for offset technology — and found the ROLAND 700 Evolution. 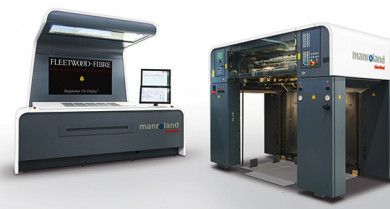 The ROLAND 700 Evolution from Manroland Sheetfed.

The newest addition to the Folding Division is the R707LV Evolution. This press is equipped with seven units plus an inline tower coater and fitted out to run both conventional and UV inks.

The press delivers enhanced automation and innovative software packages making this press the newest marshal of print capability on the West Coast.

"Deciding factors for us were the functionality of the makeready automation, coupled with Manroland Sheetfed's Inline ColorPilot & System Brunner’s Instrument Flight systems.

The ability to makeready simultaneously in mere minutes is impressive, but the color control capability in a closed loop system providing gray balance and tonality control in production is fantastic," says Mark White, senior VP of manufacturing at Fleetwood-Fibre.

Sean Springett, CEO of Manroland Sheetfed USA and Canada: "Fleetwood-Fibre will be the first North American user of Manroland Sheetfed's Red Dot Design award winning Evolution press. There is no possibility to make-ready an offset press faster than what Evolution technology brings; it is without doubt the pinnacle of the industry.

Add to that the capability to measure absolute density in-line, the ability to control solid tones, half tones and gray balance with priorities including G7, ISO/PSO, GCR and solid balance, and that puts Fleetwood-Fibre literally in a league of their own".

Fleetwood-Fibre's newest addition will drastically reduce their overall make-ready times. The Evolution's automation menu allows a Printer to build-up their capability with an a-la-carte style of options, from the SPL package or the Direct Drive version of the Evolution, the simultaneous processes during make-ready can transition a printer in a few short minutes into the next job.

"The technology is one aspect of the decision we made here at Fleetwood-Fibre to invest in the Evolution. However, as equally important is the service and support structure Manroland Sheetfed has in place around the Evolution. With topAnalysis production monitoring and the host of inspections and on-going support mechanically, electronically and operationally, they provide a fantastic support package around an inspiring machine" comments Bill Price, Folding Division plant manager.