Pacific Printing, a Silicon Valley union print shop specializing in political printing, recently installed their second RMGT 9 Series offset press. The president of the company, Andrew Goett, noted that they were looking to expand their offerings to help ensure their shop was always busy, instead of having such defined seasons. “We provide a wide range of services, including offset, digital, wide-format, mailing and fulfillment work,” said Goett, “but as a union shop, we are widely known as a political printer. That gives us really busy election years, but the non-election years a lot slower. That’s a big reason why we bought this press.” 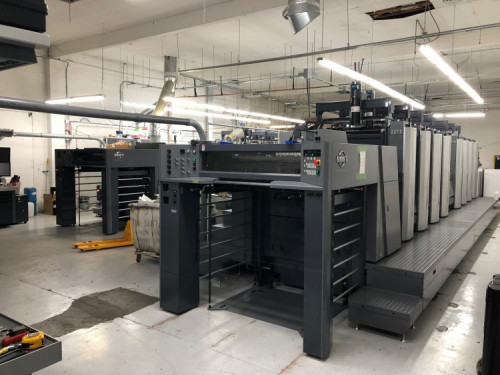 The first press was installed in April of 2018, successfully replacing two half size Komori presses.  The decision for the second press came after experiencing the real-world production capabilities of the RMGT 9 Series press. This enabled Pacific Printing to gain larger clients and service their existing customers with the upcoming elections.

Time is a major factor for political jobs, where it is all about getting the job done and into the mail stream as fast as possible. “Recently, we ran 125,000 6x11 inch pieces that, on our old press, would have taken us 10-12 hours of press time to produce. We have effectively cut that time in half on our first 5-color RMGT 9 Series, and now in half again with the new eight-color perfector. We can now go from the press to post office in two days. This is going to change our world,” said Goett.

As well as being able to take on larger runs in a shorter time frame, Pacific Printing has seen the advantage of reducing click costs and moving digital work, back to high quality offset, “We probably would not have thought we could go from digital back to offset a year ago,” he continued. “With the cost of plates, chemistry, ink, setup, etc., we wouldn’t have thought the break-even would be that low. But we went to Japan and saw the factory as well as visited RMGT users in Japan. We saw people setting up the press in 5-7 minutes and literally running 70-100 sheets then doing a new setup. That was pretty eye-opening.” In fact, they are already starting to bring some digital work back to offset, with the sweet spot currently falling around 300-400 sheets. “But we anticipate that ‘Mendoza line’ to go even lower as we get better with the machine,” Goett stated.

One of the draws for Pacific Printing was that the 37-inch press fits in the same footprint as their older 28-inch press it is replacing, allowing them to expand capacity and capabilities without redesigning their layout. “The price was a draw as well,” said Goett. “Compared to a 40-inch press, when we did price comparisons, it was 30-40% less than most manufacturers were quoting us. We felt the RMGT 9 Series was the best ‘bang for our buck.’”

“This is the perfect example of how the RMGT 9 Series can help transform a shop with the added benefit of creating great new friendships,” said Kian Hemmen, Western Region Sales Manager—RMGT, Print & Finishing Solutions. “During the evaluation process we had the opportunity to really get to know the team at Pacific Printing/Printed Union in their local surroundings, demonstrations in Southern California and a trip to Japan. They really are wonderful people and I look forward to a great, long term relationship with them.  Sitting in the lobby and offices of Pacific Printing you feel as home and you can tell that their customers do as well. They currently have political printing down to a science and are very productive.  It will be exciting to see where they go with new abilities for specialty work and value add with the new RMGT 9 series perfector. I believe Pacific Printing is going to see measurable growth in the coming years with this press, and I am looking forward to serving them throughout the entire process.”

Creating the Print Shop of Today
As well as investing in two new RMGT 9 Series Presses, Pacific Printing has been dedicated to technology and advanced features.  The presses are equipped with fully automatic and simultaneous plate changing, 55-inch press information displays, Pamarco Ink Sentinels, and proudly boast the third generation, high powered, Panasonic LED-UV systems.  The latest addition was adding the LithoFlash inline color control system from Lithec.  “We want our customers to know that we care about what their work looks like.  We take pride in our quality and run to G7 Standards.” says Goett

With all the firepower in the pressroom the next bottleneck was the bindery.  Pacific Printing quickly reacted and installed a new Horizon Mark III Saddlestitcher with an integrated knife fold unit for cross folding the direct mail booklet, Horizon CRF-362, and Tech Lighting UV Coater.  “By being able to skip the folding of signatures it freed up the folders to fold finished product and doubled our production speeds of saddle stitched books.  The Horizon Mark III is perfect for our shop, we are tight on space and it uses half as much as our older traditional stitcher.”  Slipping a Horizon CRF-362 Creaser/Folder into the bindery also freed up time.  “Being able to skip the letter press or the more complex set ups on the folder with scoring wheels and 8 page sections has given us even more time to take on more work and better yet produce a better finished piece.

With a dwindling talent pool and peak seasons, Pacific Printing has chosen productivity and automation to meet the demands required.  “We are doing a lot more work for our clients in a shorter time period today with the same amount of employees and in the same amount of square footage”  The Bay Area has one of the highest costs of living in North America and having the correct equipment and through put capabilities has allowed Pacific Printing the ability to expand and grow the business.