Here’s the next installment in our continuing series of republished Otto’s Night Watch columns written by Otto Boutin, which appeared monthly several decades ago in Printing Impressions. As the old saying goes, "you can't judge a book by its cover," but many people certainly do judge a man by the clothes that he's wearing. Outward appearances are not a reliable indication of true character. But wearing a white dress shirt — even in today's "business casual" world — still projects a sense of authority, just like it did 50 years ago.

Clothes Make the Man if He Isn’t Careful

I’ve never been much for wearing white shirts. They always made me feel like a dressed up corpse in search of a coffin. A white shirt is a very impractical piece of haberdashery. It’s always collecting evidence — lipstick, ketchup, mustard, pizza and Zsa Zsa Gabor’s chicken paprikash.

The trouble with a white shirt is that it never seems complete without a necktie. And a necktie gives me a rash around the neck that makes me look as if I had just escaped from an Arizona hanging party, much to the disappointment of the editor of the Tombstone Epitaph, who had reserved a front page for the gala event.

Nevertheless, in all my travels from one print shop to another, I always carried a white shirt in my suitcase. Up to my fiftieth year I still had dreams of wearing the white shirt down the aisle with some beautiful maiden who would unfold to me the rapture of matrimony. In fact, I did get to the point of putting on the white shirt now and then, but the necktie always reminded me of a noose.

And so on the way to the church I invariably stopped at some establishment to loosen the noose and gather liquid courage. For my Dallas wedding I woke up in Kansas City three days late. Even a jet plane couldn’t have delivered me to the church on time. And they didn’t have jet planes in those days.

As the years passed by I still held on to a white shirt, just in case. The widows kept looking better every year and their cooking seemed more delicious. But the picture had changed. It was myself sitting on the church steps, hopefully sporting a white shirt and tie. And I sat and sat, alone on the steps of churches in Minneapolis, Brooklyn, Santa Barbara and even Cicero. I sat on the steps of the courthouse in Reno and I sat on a lawn chair of a justice of the peace in Las Vegas. The white shirt didn’t do me any good. 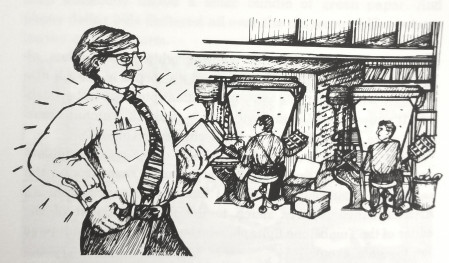 And so I reconciled myself to the dumplings of the super mart, which I munch in philosophical solitude, while most of my buddies are enjoying the bliss of paying alimony.

But the white shirt was not thrown away. I decided to wear it to work my first day on the new job. As I walked into the composing room of the Gigantic Colossal Printing Co., the place seemed in an uproar. People were running all around like mad. Nobody stopped long enough to pay attention to me.

I walked through the shop, hoping somebody would give me something to do. But people merely glanced at my white shirt and said, “Good morning.”

From a waste basket in the linotype department I picked up an old clipboard that somebody had thrown away. I decided to write down the name of my supervisors and a few fellow employees. I don’t like to yell “Hey you!” to a boss.

It seemed like the linotype operators worked much faster as I stood behind them. And when I glanced at my wrist watch, which looks good with a white shirt, even though the spring is sprung, they worked faster still.

But still nobody told me what to do. So I wandered off to the automatic typesetting department, where monitors were exuberantly tossing paper airplanes at each other. As soon as they saw my white shirt they buckled down to work. Some big shot tossed half a dozen loops of pink and yellow tape over my head and told me to run up and down the aisle. So I ran like a bowlegged hula dancer, overladen with leis.

The monitors grabbed the coils off my neck and stuck them into the machines.

"This guy’s pretty good.” I heard one of them say. “For a straw boss he uses his head. He doesn’t spill coffee over the tape. Wet tape drives me crazy.”

“And he doesn’t smoke a pipe like the other boss,” another man said. “That hot tobacco makes too many holes in the tape.”

I was glad to escape from the bewildering noise to the quietude of the make-up department. A man who had been studying a racing form glanced at my white shirt. Immediately he picked up an armful of proofs and began running all over the place. Then he put the proofs back on a table. A janitor picked them up and shoved them into his truck of waste paper.

And, with a huge broom, be began to sweep vigorously.

Then I noticed a peculiar phenomenon. Three men, forming a bucket brigade, were moving galley after galley of type from cabinet 62 to cabinet 39. Meanwhile another bucket brigade was moving galleys from 39 back to 62. Each of the brigades was under the supervision of a white-shirted straw boss.

“Why are you going in circles?” I asked one of the executives. “You’re nullifying each other.”

“That’s our standard operating procedure,” he told me. “Two executives for every job. One corrects the mistakes of the other. Do you realize what would happen if we had only one executive for the job? We’d have chaos.”

“That type looks dusty,” I said.

“Then why do you keep moving it back and forth? Why don’t you dump it?”

One of the workers stopped and stood glaring at my white shirt. He picked up the wall phone and called some kind of labor office.

A burly man came charging in on me.

“A new boss, aren’t you?” he yelled. “Pushing your weight around already. Trying to throw people out of work. Our contract says that we’ve got jurisdiction over that type and …”

“Aw hell,” I said. And I went outside to buy a blue shirt. I tossed my white shirt into a trash can. Why should I let a white shirt give me an ulcer?

As soon as a boss spotted my blue shirt he led me to the linotype department. He gave me a style sheet and told me to take machine number 27.

“We expect 80 lines an hour,” he said sternly, “and not more than five errors to a galley.”

So I sat down and set type.

A few hours later I noticed that somebody was standing behind me.

He wore a white shirt and carried a clipboard. He glanced at his wrist watch.

I still don’t know who the hell he was.