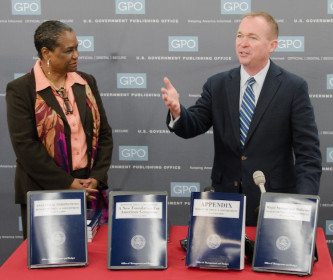 WASHINGTON — May 19, 2017 — Office of Management and Budget (OMB) Director Mick Mulvaney visited the U.S. Government Publishing Office (GPO) to inspect the production of President Donald Trump’s Budget for Fiscal Year (FY) 2018. GPO Director Davita Vance-Cooks provided Director Mulvaney a tour of the plant, where GPO employees have been working to produce the President’s Budget. GPO and OMB will release and distribute the Budget next week.

“It was an honor to welcome Director Mulvaney to GPO and introduce him to the men and women who are part of the production of President Trump’s Budget,” said GPO Director Davita Vance-Cooks. 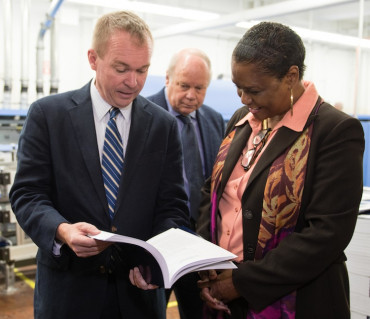 OMB Director Mulvaney was given a tour of the plant, where GPO employees have been working to produce the President’s Budget.

GPO is the Federal Government's official, digital, secure resource for producing, procuring, cataloging, indexing, authenticating, disseminating, and preserving the official information products of the U.S. Government. The GPO is responsible for the production and distribution of information products and services for all three branches of the Federal Government, including U.S. passports for the Department of State as well as the official publications of Congress, the White House, and other Federal agencies in digital and print formats.

GPO provides for permanent public access to Federal Government information at no charge through www.govinfo.gov, partnerships with approximately 1,150 libraries nationwide participating in the Federal Depository Library Program, and our secure online bookstore.