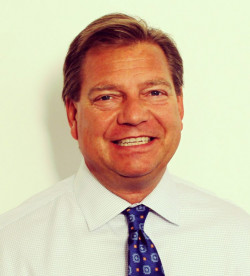 Every year, the National Paper Trade Association (NPTA) bestows its highest honor, the Stanley O. Styles Industry Excellence Award, to an individual who has had a distinguished career in the printing paper industry. Recipients of this prestigious annual award are considered industry leaders who have made a positive impact through innovation and dedication, and whose character represents the ideals for which leaders all strive.

The NPTA recently announced that Midland Paper’s CEO, Mike Graves is the 2020 Recipient of this honor. According to the NPTA, “Mike’s impact over the years is marked by his steadfast leadership, dedication to the Industry, innovative ideas, strong sense of ethics, willingness to lend a hand, which make him more than deserving of NPTA’s highest honor”.

Mike began his career with Whitaker-Carpenter Paper in 1984 in Chicago, Ill. serving in a sales capacity for several years. Eventually, Whitaker-Carpenter was acquired by Unisource where he held various sales and management positions until becoming the area general manager (GM) for the paper and packaging segments in Illinois at the age of 36. In 2002, Mike came to Midland Paper, Packaging + Supplies as the GM of the Chicago division. He was soon appointed chief operating officer of the company before becoming president and an equity partner. As the chief executive officer, he now oversees all of Midland’s commercial printing relationships, vendor relationships, the packaging and specialty paper segments and Midland’s 16 distribution facilities. Mike is credited with being a major catalyst of Midland’s growth and success, going from a regional Midwest fine paper distributor to a $1.1 billion national distributor of fine papers, packaging and specialty media.

Mike has also served in industry leadership and advocacy positions including various Merchant Advisory councils and as a member of the NPTA Board of Directors from 2012 to 2016.

“I can’t begin to express what an honor this is to receive the Stanley O Styles Award. It’s humbling and yet at the same time, makes me very proud to have associated with such great people in our industry and Midland Paper”, said Mike Graves. “Many of these folks I look to as dear, lifelong friends.”