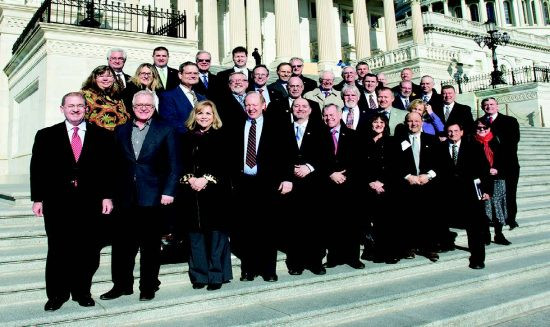 NPES is advocating a multifaceted government affairs agenda for the printing, imaging and mailing (PIM) industry in 2017 aimed at:

“This is a comprehensive plan to achieve the needs of our member companies and their customers, in the context of federal legislation and regulation,” Mark J. Nuzzaco NPES VP, Goverment Affairs, says. “Through collaboration with other PIM industry organizations, NPES is pursuing a broad-based approach encompassing multi-industry organizations, coalitions, and grassroots constituent engagement with elected officials and their staffs.”

A growing economy is good for business in general. One of the most impactful actions our government can take to promote strong economic growth is to reform the outdated U.S. Tax Code by adopting policies that encourage capital investment, reduce taxes on businesses and individuals, make U.S. manufacturers more globally competitive, and facilitate the intergenerational transfer of businesses, especially smaller family-owned enterprises.

In support of these policies, NPES is championing the inclusion of 100% expensing as the essential first building block of permanent pro-growth tax reform. According to the Tax Foundation, a highly regarded Washington think tank, expensing is the single most powerful component of a tax reform plan that would increase sorely lacking capital investment, add the most growth to the economy, bring back well-paying jobs, and increase tax revenue. Specifically, the Foundation asserts, expensing of new investment would boost long-run GDP by 5.4% and increase the number of full-time equivalent jobs by 1 million.

NPES also supports a corporate rate cut for all business entities—however they are legally organized—and repeal of the Estate Tax, the latter especially important to the perpetuation of smaller family owned businesses.

Postal reform that sets the United States Postal Service (Postal Service) on sound financial footing is directly relevant to the business interests of printers, mailers, and their suppliers. Some have estimated that in earlier times nearly 50% of all printing was destined for delivery by the Postal Service. But in the internet age, that huge market for print is significantly diminished and challenged. Notwithstanding this undeniable trend, paper-based printed communication is still very effective and vitally important to commerce, hence the need to keep it affordable through reasonable postal rates.

Postal reform was on a fast track when the new 115th Congress convened in January, with credit to the former Chairman of the House Oversight and Government Reform Committee Jason Chaffetz (R-3-UT) for introducing H. R. 756 The Postal Service Reform Act of 2017, which was nearly identical to the bipartisan legislation crafted in 2016. After the bill was approved almost unanimously by the House Oversight and Government Reform (OGR) Committee in March, it regrettably hit a legislative speed bump when its champion Chaffetz announced his departure from Congress in June. Since then, NPES and its allies in the Coalition for a 21st Century Postal Service have sought leadership for the legislation from new OGR Chairman Trey Gowdy (R-4-SC), in addition to pursuing the support of Ways and Means Chairman Kevin Brady (R-8-TX), the latter to facilitate integrating all postal retirees into the Medicare system, a change that will bring much needed financial relief to the Postal Service’s balance sheet.

In addition to domestic markets, international competitiveness of U.S. manufacturing has long been a top NPES government affairs priority. So, NPES was disappointed when the Trump administration pulled the U.S. out of the Transpacific Partnership (TPP). In addition to TPP, NPES strongly supported the proposed Transatlantic Trade and Investment Partnership (TTIP) with the European Union, and worked successfully in the 114th Congress to secure approval of Trade Promotion Authority for the president, and a strong Export-Import (Exim) Bank to help U.S. exporters be competitive in global markets. As the Trump administration now looks to renegotiate the North American Free Trade Agreement (NAFTA), NPES will follow this process closely, which hopefully will result in new and more advantageous trade agreements with Canada and Mexico - two important export markets.

Another area that is highly important to the PIM industry’s ability to prosper is workforce readiness. In this regard, NPES lauded the unanimous bi-partisan approval of the Strengthening Career and Technical Education for the 21st Century Act, (H.R. 2353) by the U.S. House in June, an important step forward in bridging the widening skills gap in the PIM industry. It is imperative that the U.S. Senate also approve this legislation as soon as possible so that its improvements to career and technical education can be put into effect.

The bill is designed to strengthen and improve career and technical education by reauthorizing the Carl D. Perkins Career and Technical Education Act, which will help more students gain the knowledge and skills they need to compete for in-demand jobs, and aid employers in finding technically qualified workers for their businesses. The challenge of finding qualified workers for technically demanding jobs is repeatedly cited as one of the top “keeps me up at night” issues for stakeholders across the PIM value chain.

Government regulation is often burdensome to the economy, and frequently has an anti-paper bias. For example, NPES supports efforts by the Coalition for Paper Options (CPO) to block the imposition of Security and Exchange (SEC) Rule e3, which would allow mutual funds to stop mailing shareholder reports and other important investment information to investors, thereby disregarding millions of Americans’ preference for receiving paper copies of investment materials rather than searching for this information online. As pointed out by CPO, this rule is unnecessary, discriminatory, and will negatively affect the more than one third of Americans who lack regular internet access. More broadly, NPES also supports reforming the overall system by which federal regulations are developed and implemented, including the Regulatory Accountability Act of 2017 (H. R. 5 and S. 951).

Getting the PIM industry to punch at or above its weight

The PIM industry is a huge sector of the economy, cited as $1.4 billion annually over 7.5 million people. Its magnitude is comparable to other large industrial sectors, but unfortunately seems not to be perceived as such. Perhaps it is because there are many voices speaking without enough coordination or uniformity. Some might say the industry is “punching below its weight” because of this.

While there’s a core cadre of active PIM
industry executives who have the vision to recognize the importance of government policy advocacy, many more voices are needed—including rank-and-file employees who are educated in how government policy affects their livelihoods. As a starting point, NPES urges its members and other PIM industry colleagues to avail themselves of the information disseminated by their trade associations.