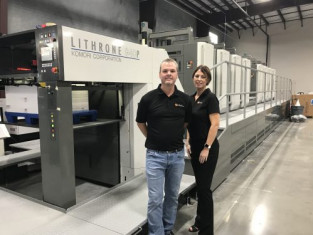 ND4C owner Todd Frost reports that the press has been up and running with LED since April 2017, making it the first fully integrated setup of its type using XO Series LED-UV technology on a Komori GL 840P in the United States.

The company chose AMS Spectral UV – A Baldwin Technology Company’s LED-UV products, Frost explains, because ND4C has had a positive working relationship with Baldwin Technology for years. “My experiences with Baldwin’s dryer systems have always been positive,” he said, adding that Baldwin technology is known to integrate well with Komori products.

According to Frost, the installation of the XO Series LED-UV system took about five days, and ND4C spent three to four weeks adjusting chemistry to perfect the updated printing process. The press has been up and running for months now, and Frost said they average 13,500 SPH perfecting.

ND4C already had LED-UV curing technology in its San Antonio plant, so Frost said there wasn’t a huge learning curve for his staff when preparing to use the AMS Spectral UV technology. “LED curing has been simplified over the years, so we weren’t overly concerned with a learning curve. We had some understanding when it came to chemistry, blankets and inks.”

When asked how LED-UV curing has impacted the business so far, Frost commented, “LED curing has had a phenomenal impact on the efficiency of our day-to-day operations.” He pointed out that they no longer use spray powder, and have stopped using coatings to protect sheets. This has led to a cleaner pressroom, according to Frost: “The pressroom has gone from a typical offset print shop to a cleaner environment, like you would see in a digital print shop.”

In terms of benefits, Frost said that the LED-UV system has decreased ND4C’s setup and productions times, allowing them to be more competitive on bids for both shorter and longer runs. “Turnaround has absolutely been impacted,” the printer commented. “By removing many of the variables on the press, you can’t help but decrease setup times and get sheets to the bindery faster.”

He added that the quality of his product has increased with LED-UV curing: “Press sheets simply appear brighter and more vibrant when you cure the dot quickly after the ink hits the sheet.” 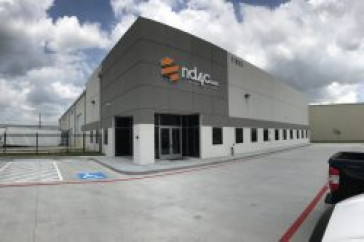 Additionally, he surmised that LED-UV curing leads to fewer variables on the press to deal with. “The LED reduces complexities surrounding offset issues, like heavy coverage on coated or uncoated stocks, etc. … this simplifies the printing process and reduces mistakes that could lead to reprinted jobs.”

Frost points out that LED-UV’s energy efficiency has impacted ND4C’s overhead costs, but that LED-UV inks still cost about twice the price of conventional inks. “We offset this cost by removing Aqueous coating from operations – we felt the vibrancy of the LED-UV inks was a good enough substitute. We initially had concerns, but have not received a single customer complaint.”

When it comes to choosing an LED-UV technology, Frost said his opinion is that operators are wise to choose a system that the press manufacturer is comfortable with: “For ND4C, running a Komori 840P, it was Baldwin/AMS Spectral UV,” he summed up.