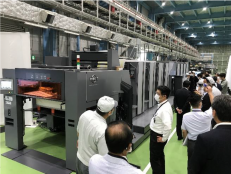 RMGT held an open house at its facility in Fukuyama, Japan, on Aug. 25-28.

Open House events featuring the RMGT 970 running live will be presented at demonstration facilities in North America in the early part of 2021.

“We developed the new RMGT 970, incorporating our strengths and technologies for release at drupa 2020,” states Katsushi Hirokawa, President, RMGT. “The RMGT 970 can accommodate a 25x 38-inch sheet, is excellent in cost performance, automation, and environmental friendliness.” The 970 is the newest member to the RMGT 9 Series family of presses that boasts over 80 new installations in North America since 2014. A review of the new features of the RMGT 970 is available as a trailer video and can be viewed at: https://bit.ly/RMGT970

“While widely recognized as having a great advantage in longer press runs, a key feature of the Open House was to demonstrate the advantage of offset printing over digital in short-run print jobs,” observes Chris Manley, President of Graphco, distributor for RMGT in the Midwest and Southeast. Using a series of unique, consecutive print jobs, the RMGT 970 perfecting press demonstrated a complete makeready, printing 500 color accurate 8-up sheets completely dried and ready to move to bindery, using just one press operator, in under 6 minutes. This economy in offset print manufacturing is enabled by recent technologies brought to market by RMGT. 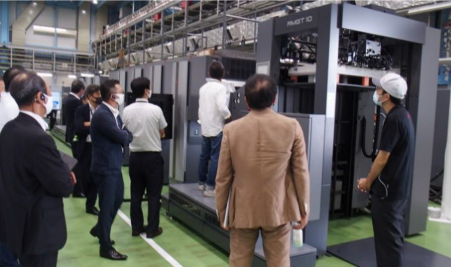 RMGT officially launched the RMGT 970 offset press at its open house in August.

RMGT was the first press manufacturer to recognize that the industry needed a bridge between smaller, slower and expensive to run digital devices and so-called full-size presses that seldom ran a full 40” sheet. RMGT effectively invented the 8-UP market and the 9 Series press to help RMGT users profitably produce commercial applications like direct mail, 16-page signatures, and short-run packaging (the 3 largest segments of the print market). The new 8-UP+ RMGT 970 will now produce jobs like 9x12” booklets, and many other applications, on the same size sheet that a 40” press would run. “The original 9 Series created a highly profitable niche in the market with our 25x36” sheet size and new 970’s 25x38” size now means that sourcing cover weight stocks and running covers will be that much easier. Our customers asked for the 8-UP+ size and the RMGT factory said yes,” states Kian Hemmen, Director of Sales for Print & Finishing Solutions, the RMGT distributor for the western United States.

ASAP (Automated Smart Assist Printing) System The ASAP (Automated Smart Assist Printing) system allows pressmen to enjoy an entirely new level of automation and autonomous press operation in the 8-UP press format.  During the live demonstrations a series of short-run jobs were put in sequence using ASAP. With ASAP, the pressman touches one button and the entire printing process — from ink and paper presetting, blanket and impression cleaning, and plate changing through verification of test printing, register adjustment, ink density adjustment, and full sheet inspection are all autonomously processed without even pulling a sheet. As ASAP releases the job into production the 970 perfecting press runs at 15,000 4/4 or 5/5 sheets per hour. Any variance from the specified QC standard is flagged by ASAP to insure only compliant sheets are sold to the end user.

Single Pressman Operation The ability to staff a highly automated RMGT 8-UP+ press with a single pressman was important for profitability and flexibility prior to March of 2020. However, as the printing industry recovers from the economic results of COVID-19, reducing per shift staffing costs will bring greater viability to pressrooms who take the 9 Series approach to manufacturing. Even before the release of ASAP, over 80% of RMGT 9 Series presses running in North America are manned with a single pressman. Depending on the local labor market and how many shifts an RMGT 9 Series printing company runs per week, the savings from the single pressman approach ranges from $45,000 to $180,000 annually.

LED-UV CuringRMGT was the first sheetfed offset press manufacturer to commercially develop LED-UV curing technology, releasing this at drupa in 2008. LED-UV lamps dry printed sheets instantly, offering impressive energy savings over other curing technologies. An added benefit in the print and finishing workflow is that LED-UV curing eliminates the need for powder. This powderless press environment allows offset printed sheets to move either to a digital overprint scenario or directly to finishing without impacting the performance of these devices.

“RMGT’s launch of the new 970 is a key step forward in our continuing leadership of the 8-UP market,” states Kian Hemmen. “Equipping the RMGT 970 with our new ASAP technology and expanding into a 25x38” press sheet makes the value proposition of the RMGT 9 Series even more impressive. Single pressman operation is inherent to the 9 Series which is why we say that we’ve been practicing ‘social distancing’ since 2014. The decision to launch is a welcomed step and we can’t wait to see the RMGT 970 landing stateside.”