As the craft beer industry continues its steady growth and momentum, NEPA Carton & Carrier is seeing increased demand from this specialized niche contribute to its own exceptional sales growth. With a sterling reputation as a full service folding carton manufacturer for businesses across the U.S. specializing in beverage carriers, this northeastern Pennsylvania package printer is poised to deliver products that are not only sturdy but fun, artistic, and colorfully creative, telling the story of each brand, special seasonal occasion or limited edition.

As a leading folding carton provider to the beverage, food, cosmetic, and tray marketplace, NEPA’s customers will be the beneficiaries of a second new Rapida press, to be delivered in the spring of 2020, allowing NEPA to continue to provide superior customer service, quality products and quick turn-around.

“Our work is of the highest quality and time sensitive and we work hard to consistently exceed our customers' expectations,” says Mike Collins Sr, president of NEPA. “Our current Koenig & Bauer Rapida 145 57-inch press has added value to our business and allowed us to become trusted professionals that deliver exceptional products to our customers. Due to the continued growth of craft beer sales, now amounting to 24% of the total $114-billion U.S. beer market, as well as our continued new market penetration, we are excited about adding a second Rapida to our pressroom equipped with increased efficiencies and added capabilities that will contribute to the high level of quality and service that our customers expect from us.” 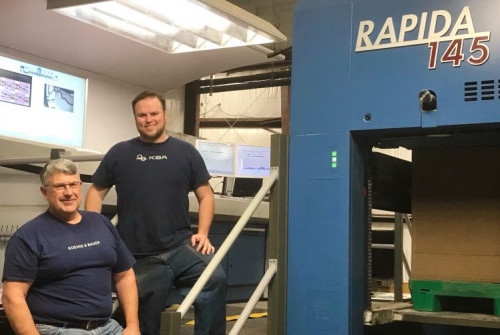 NEPA places the highest premium on providing high quality custom folding carton solutions that meets the needs of individual customer production. “We chose a second new Koenig & Bauer sheetfed press because it has unique technology as compared to other press manufacturers,” says Collins. The new press, with a top speed of 17,000 shp, will be equipped with a host of automated modules specific to Koenig & Bauer such as QualiTronic Color Control, QualiTronic PrintCheck, and QualiTronic Instrument Flight – grey-balance control from System Brunner. All of these advanced color control systems will provide the ultimate system for total print quality control and it requires no operator intervention.

NEPA chose to add a second Koenig & Bauer Rapida press due to its outstanding productivity, sharp reduction in client turnaround, and high quality produced on its current Rapida press. This key workhorse, a 57-inch six-color large-format press, which has been operating unabated for the past three years, is delivering the highest speed to bring their customer’s products to market with total quality control systems. To provide the utmost degree of quality, it is equipped with inline color measurement and control via a camera located in one of the units that takes a picture of each sheet as it is printed. This system improves quality for NEPA’s customers and substantially increases productivity.

To ensure that its beer cartons are color consistent from run to run, NEPA relies on its Koenig & Bauer ErgoTronic color control system on its Rapida 145. NEPA operators are clearly enthused by the streamlined automation and reduced makeready from hours to only minutes, says Collins. Additional important automation systems include the multi-function CleanTronic washing systems and the Koenig & Bauer DriveTronic SIS (Sensoric Infeed System), a patented sheet infeed system that eliminates the need for NEPA’s operator intervention.

To maintain its leadership role in the beverage carrier and carton industry, NEPA utilizes its environmentally-friendly Koenig & Bauer VariDry HL Blue system to provide ultra fast throughput due to its drying capabilities resulting in a greener footprint.

Its new Koenig & Bauer Rapida 145 will also be equipped with the inline QualiTronic System Brunner and its Instrument Flight system, just as the current Rapida 145 is equipped. When NEPA installed it three years ago on its current Rapida 145, the firm became one of the first printers in North America to have System Brunner and its Instrument Flight system featured on its new press. In that time, this important feature, says Collins, has allowed the press to be controlled via grey balance with the QCC option from Koenig & Bauer. It also is the only system on the market that allows a printer to change and select the grey balance that they prefer on press and control. This allows NEPA to run and control its printed product to G7 standards.