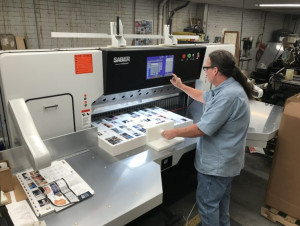 New Orleans has regained its party town swagger and that’s good for business at Ash Abbott’s MPress. The commercial offset and digital printer do work for a wide range of industries, but none is more visible than the convention, healthcare, wedding and sports business. The need for better quality begins with his equipment, thus the reason why Abbott installed a new 54-inch SABER X-15 paper cutter with Microcut from Colter & Peterson two months ago.

“I know people buy the SABER with Microcut for the productivity advantage. I get it, especially since we run 20 hours, four days a week and a normal shift on Friday,” revealed Abbott, who has owned the 47 employee company since 2003. “Our capacity has never been an issue so we did not buy the SABER for that reason. Our need was for better quality so we can produce the highest quality cuts on all of our finished work.”

MPress is located right off the Pontchartrain Expressway – which runs through the city – and not far from the Mercedes Superdome, the Bourbon Street entertainment district, and the Ernest N. Morial Convention Center. All were impacted by Hurricane Katrina in 2005. In the aftermath, Abbott bought two additional printing companies and rebranded the business as MPress. He also rented the building of one of those businesses after his property, only five miles from the levee break, took on 18 inches of water inside the building and displaced them for 15 months.

“There was a period afterward where everything was pro-New Orleans,” says Abbott, whose company generates revenue of about $7 million annually. “Business is back but it has become more competitive. We do about $2 million each in stationery, bookwork and Direct Mail, and our digital revenue has grown to $1 million. I’m proud that we have spread out the work. Our largest customer today only accounts for five percent of our revenue.”

Abbott has spared no expense with his equipment. On the offset side of the 34,000 square-foot operations, MPress utilizes a 40-inch, 6-color Mitsubishi and a 29-inch, 6-color Komori press, both with aqueous coating. A 40-inch, 2-color Heidelberg handles the black-and-white work, in addition to a Heidelberg QM46 and Halm Super Jet. For digital jobs, they rely on a Kodak NexPress and RICOH Pro 9110. The new SABER X-15 shares cutting duties with a pair a rebuilt 54-inch Polar he bought from C&P that replaced another one.

“After Katrina, I purchased two Polars in November 2006. Both were used, 1998 models and I had Colter & Peterson install them,” recalled Abbott. “I have since added Microcut to one of them. C&P has been our go-to guillotine cutting equipment dealer since Katrina, and their past performance factored into my decision to buy the new SABER from them.”

The SABER X-15’s ability to handle sizeable workloads, combined with being a heavier machine known for its high accuracy rate of 1/64th an inch and ability to handle many different types of substrates, fits well with the short and medium runs that are the moneymakers for MPress.

“Katrina dented the convention business but in the last 3-4 years, we are back to the glory days,” said Abbott. “We do a ton of postcards and rack cards and that’s why we upgraded our paper cutter. In addition, we get a lot of convention artwork in at 6 pm to print and cut 20-page books and everything else needed, and we deliver all those jobs at 6 am the next morning.

“My wife Kelley, has grown our wedding invitation business, which includes letterpress and foil stamping, and is very critical when it comes to cutting. Direct mail is always steady and with it being a good local election year, we will be doing a substantial amount of political postcard work which requires a ton of cutting.”

“The full touchscreen is 15 inches, much bigger than any other screen I’ve seen. It gives our operators the capability to see everything,” he says. “Our three guys use it for all the small jobs because of the false clamp size, which is 3-1/2 inches compared to 3-5/8’s on the Polar. Different cuts can have different clamp pressures, and we have learned that we can program those varying pressures with the cuts into the Microcut system.”

The clamp pressure also impacts the quality of the final product, which Abbott says makes a big difference on the work MPress does for local restaurants, festivals and events, and for the NFL’s New Orleans Saints and NBA’s New Orleans Pelicans.

“We need the highest quality for restaurant menus and punch cards. As one of the printers for the Saints and Pelicans, we don’t produce the tickets but we do print player trading cards, invoices for season ticket mailings, programs, playbooks and media guides. The SABER is our lifeblood and gives us clean cutting by squaring up the back gauge. It’s also a morale booster for our team. They take pride in their work and it signals things are going well when they get to use new equipment.”