Mossberg & Company Inc., a fixture in the region’s printing industry since 1930, has bolstered its capabilities with the recent installation of a Heidelberg XL-106 8-color press.

The 41-inch perfecting press, which increases the number of impressions per hour by 3,000, replaces two of Mossberg’s presses while increasing productivity and reducing overall setup time. It also frees up space in Mossberg’s manufacturing facility, allowing for future technological advances. 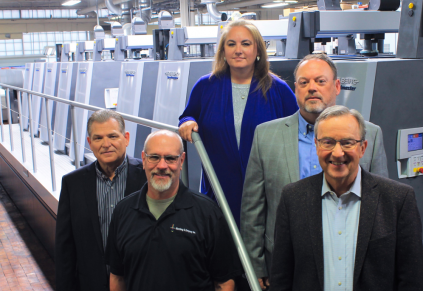 “We’re excited about the addition of this press to our printing arsenal,” said James W. Hillman, Mossberg’s third-generation President and CEO. “Our decades-long commitment to delivering world class printed materials remains intact, as does our mission to be the most proficient provider of printed products and services in the Midwest. It’s interesting to note that the human eye can see more than 1 million colors, and so can the new XL-106.”

Mossberg has served the printing, distribution and marketing needs of customers from an array of industries, including health care, consumer products, higher education, retail, tourism and craft beverages. The company employs approximately 110 professionals and has sales representation in South Bend, Indianapolis and Michigan.

Mossberg was founded in 1930 when Herman T. Mossberg brought skills honed at one of the nation’s largest printers to open his own company in South Bend. In 91 years, the company has had only three presidents—the late Mr. Mossberg, the late Charles W. Hillman from 1979 to 1994 and James Hillman from 1994 to the present.