More Than One Cure for UV

As a bonified industry veteran who has been deeply involved with the UV curing segment of the industry for a really long time, I have seen a lot of changes since my first hands-on UV experience in the late 1970s. 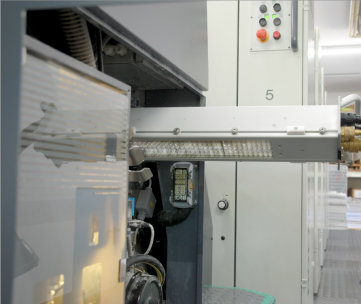 An IST LED-UV system is installed after the last printing unit on a manroland 305 sheetfed offset press.

Contrary to popular belief, the idea of curing inks with UV energy has been around for a long time. In fact, Sun Chemical, an early proponent of the technology, has patents on it dating back to 1946.

Early on, it was curing varnishes on wood that seemed to be a good match for this technology. Experimentation with UV started in the UK in the 1960s, mostly for package printing, and by the 1970s it became the process of choice for that market. In the U.S., the best info we can come up with places the first commercial package printing job produced with UV litho around 1969.

The U.S. market began to utilize UV in the high-end commercial segment in the later 1980s. It was UV technology that helped launch the advent of eight-plus-color sheetfed machines for that high-end segment. In the early 1990s, if an American printer did not have a full UV eight-color, coater-equipped press - or two - it simply could not compete in the ultra-high-end commercial print market.

Arguably the first major change in the approach to UV inks occurred in the late 1990s, driven of all things by a UV curing system supplier. Called CoCure, it opened a new world to any U.S. printer with a coater-equipped machine and greatly expanded UV’s acceptance in the market. Later the term hybrid UV was adopted to better describe the technology.

The key to this technology was the ink formulation, which was basically a blend of conventional pigments with UV-reactive vehicles. It used normal UV lamps - just far fewer than anyone previously thought was possible and therefore was a somewhat economical way to enter the UV curing world. The UV establishment turned their heads away while a few trailblazers embraced it.

After the normal refinements, hybrid UV became an accepted and proven technology that really brought UV technology into the mainstream of sheetfed press configurations. Not just in the U.S., but even the naysayers in Europe embraced it eventually (one even tried to take credit for it).

At that point it is safe to say that there were basically two established UV offset technologies accepted by the industry. One was full or pure UV; the second was hybrid. Full/pure UV was a pure UV formulation that would run on a UV-prepared machine (EPDM rollers and blankets) 100% of the time. It was very well-suited for nontraditional, non-porous substrates due to its increased adhesion qualities. Hybrid was a “blend” of conventional and UV inks, which utilized normal UV coatings and worked well for a wide variety of applications. Many printers running hybrid would switch between hybrid and conventional inks.

A few key things to remember: the UV lamp output for the lamps were the same for pure UV as they were for hybrid UV. The ever-important, end-of-press results were also the same, the only exceptions being the occasional adhesion issues that nontraditional substrates experienced with hybrid formulas.

The next development that changed the UV world was the LE (low energy)/HR (high reactive) UV inks and coatings. The concept was to provide just one or two UV “special” traditional lamps with a specially formulated UV ink and coating that were exactly matched to each other. This time it was ink and coating dependent, but also required a traditional UV lamp with special doping to create a different UV wavelength that exactly matched the ink formulation.

Again, it was marketed as a more economical alternative to normal UV in that a printer could possibly use fewer lamps to achieve the goal. Less lamps, less supporting equipment and less energy because of that, but requiring more expensive inks and coatings with limited suppliers due to the special ink and coating formulations. This technology is still actively offered in the sheetfed segment of the business, focusing mainly on the commercial market.

Over the past several years, LED-UV has been a term widely publicized throughout the graphic arts industry. Starting out surrounded by lots of energetic marketing along with some truly amazing claims, over time it has gained acceptance across multiple application platforms, including offset, digital and flexo.

LED-UV is a different technology from full/pure UV, hybrid or LE, HR and HUV, in that the light it utilizes is produced by light-emitting diodes, not a traditional UV lamp. The power output of LEDs are far less than that of traditional UV lamps, so getting the UV energy to the substrate can be a challenge that requires the aid of special optics and/or reflector, even more so in a sheetfed application, particularly in the delivery portion of the press. At the same time, the energy required for the LED system is less than for a traditional UV system.

Several of the advantages with LED-UV include instant on/instant off, which allows formatting both around and across the cylinder with proper press interfaces. The LED also runs cool to the substrate due to the fact that no infrared is being produced. However, the electronics within the lamp head run hot and do require water cooling.

The reality is that current LED-UV systems deliver a nearly monochromatic bandwidth and cannot provide the wide-band UV wavelengths that are required for proper surface cure like traditional UV systems can. That doesn’t mean they are not effective at curing LED material, because they in fact are. Only that the deficiency is compensated by adding expensive chemistry to the inks and coatings.

LED is not just light source dependent; it’s ink and coating formulation dependent as well. And although there is steady growth in this area, the suppliers of raw materials for LED-UV inks and coatings are dwarfed by those of traditional UV, keeping LED ink and coating prices high and options limited.

It’s pretty obvious that the wide band of the traditional UV provided everything, even the specialty inks required to provide a solid cure.

Something that concerns me is the idea that the very premise of the advantages of UV curing is being redefined. Many industry people jumping on the LED bandwagon have no previous UV experience and, therefore, don’t really know what the process is capable of delivering.

For example, I hear all the time of “post-cure” issues with LED applications. In other words, just wait a while, it will be fine as it “cures” in the load, at the same time hearing that users can run full loads and eliminate powder spray in the delivery. That seems to be a contradictory approach.

Somehow people think that in-line coating over wet ink (wet trap) and curing with a single UV light source (LE, HR, LED or even traditional UV) will yield the same results as curing the ink first and then applying the coating and curing it in the delivery. It is just not possible and goes back to not knowing what it should look like. Many in-line wet trap UV coatings I see these days look similar to a well applied water-based coating … sad but true.

If you understand that proper UV curing of a printed product offers the maximum application flexibility on the widest variety of substrates, increased production efficiency, the highest durability and rub resistance, the highest gloss level with coatings and the ability to respond to new market opportunities, then UV could be in your future.

LED Is Excellent for Specific Applications

Today there are several UV curing technologies to choose from and LED is an excellent option for specific applications. Truthfully, all of them are supposed to do pretty much the same thing. That being to reliably and consistently provide the proper dose, intensity and wavelength of UV energy to the UV-curable material being applied, and to end up with results that meet customer expectations, hopefully, at press-rated speeds. Perhaps the biggest consideration will be the economics, as they vary considerably between the technologies.

One thing is absolutely sure: there is no “universal, one size fits all” solution when it comes to the selection of UV curing options. Seek out well-known, established suppliers that offer multiple platforms and take advantage of their experience in guiding you through this exciting and sometimes confusing technology.

Bill Bonallo is the president/CEO of IST America Corporation. To date he has given 45 years to the trade specializing in the production and creation of ultra-high end lithography. His specialty is ink and coating drying and UV curing and specialty applications, and is well known for his skill set in that area. He is accredited for being the driving force in the creation of the Co Cure/Hybrid UV process, and received a GATF Intertech award for his efforts.