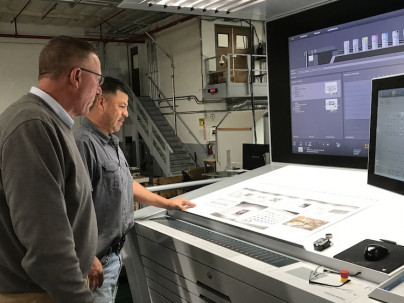 Greg Moquin, president and owner, together with the company's XL 106 press operator at Moquin Press.

KENNESAW, Ga. — April 27, 2017 — The first U.S. adopter of Heidelberg’s revolutionary Speedmaster XL 105 technology in 2006, Moquin Press has recently installed a Speedmaster XL 106-6+L. The first machine in the U.S. with Push to Stop technology that is fully integrated with Heidelberg’s Prinect workflow, Inpress Control 2 and Inspection Control 2, the XL 106 runs beside an existing XL 105-6 +L with UV.

Moquin, a trade and packaging printer located near San Francisco, has never shied away from investing in new technologies in order to deliver world-class quality at competitive prices. “Bringing Industry 4.0 level automation into our pressroom with Push to Stop has been a total game changer. The unprecedented level of integration of the machine with our workflow has made a tremendous impact to our productivity and has already driven our costs down. Accuracy, speed, and incredibly fast changeovers from job to job — compared to our older machine, the difference has been night and day,” said Greg Moquin, President and Owner.

With Heidelberg’s breakthrough Push to Stop technology together with AutoPlate Pro, jobs can be autonomously changed over without operator intervention and continue to print until the operator steps in to interrupt if required. All of this is made possible with Intellistart 2, a new and unique integrated software system for effective job preparation, which reduces the number of operating steps during changeover by approximately 70%. The systematic elimination of time on every job change leads to consistent savings and increased efficiency.

According to Moquin, their new XL 106 has actually pushed the productivity of their other older machines. “Our press operators have taken cues from the way the new machine runs and changed the way they operate the older machines,” said Moquin.

Already equipped with comprehensive packaging capabilities, Moquin is looking to expand even further into the highly demanding packaging and pharmaceutical realm. This influenced their decision to purchase the new XL 106 with both Prinect Inpress Control 2 and Prinect Inspection Control 2 for exceptional quality control.

Inpress Control 2, a fully integrated, spectrophotometric color control system brings the press up to color during makeready and continuously monitors and controls it during the run – without the need to pull sheets.  Simultaneously, Inspection Control 2 compares the content of an entire printed sheet with the job PDF, and subsequently verifies it against an OK printed sheet. Any errors on the run are flagged in the delivery pile, and the printer is notified.

Moquin sites a most recent job with a press run of 30,000 sheets. Just 150 sheets into the job, a small piece of paper hit the blanket. Prinect Inspection Control 2 immediately identified the error, saving them from a costly mistake, which would not previously have been caught by the press operator.

The investment in new technology is a direct reflection of Moquin’s continued commitment to their customers. Moquin has taken the production transparency that Prinect workflow creates and provided it to their customers in a unique, customer specific front end system called MyMoquin. Available for phone or tablet, the app enables customers to see in real time when their job will print, how long it is on press, and when they can expect it to be pushed into postpress.

“In order to distinguish ourselves in the market, we must accelerate our customer engagement and enhance our level of service,” said Gustavo Eydelsteyn, Moquin’s Director of Technology. “Like Heidelberg, we’re paving the way for printers in the world of Industry 4.0. By building a smart production platform of integrated software and equipment, we have been able to deliver both internal and external improvements.”

The benefits of new technology cannot be maximized, however, without the proper support. Heidelberg’s SystemService team has been instrumental in Moquin’s success over the years, especially with the most recent press. According to Moquin, “The professionalism and knowledge of the Heidelberg service team is what has kept me a customer all of these years. As all of our machines are under SystemService contracts, we can count on fast response times for both parts and service.”