Frank Romano - On a Mission to Preserve the History of Printing 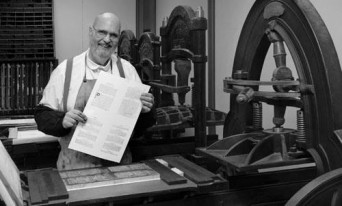 Frank Romano holds a sample produced during a history of type lecture at the Museum of Printing.

HAVERHILL, Mass. — December 15, 2016 — “Amazement or nostalgia” is how Frank Romano, world-renowned printing expert and Rochester Institute of Technology professor emeritus, would describe a typical visitor’s reaction when entering The Museum of Printing, a non-profit organization based here. “Visitors are either amazed by the old technology or remember how they worked with it,” says Romano, who serves as a member of the executive committee of The Friends of the Museum of Printing and has been involved since it was founded.

The museum was incorporated as The Friends of The Museum of Printing Inc. in 1978 to save and preserve printing equipment and library materials associated with the graphic arts.

“In the early 1970s, The Boston Globe was converting from hot metal to cold type. A group of us wanted to save some of the equipment and preserve it,” Romano explains. “I was editor and publisher of New England Printer & Publisher magazine at the time. The Taylor family, which owned the Globe, found us free storage space.”

Today, The Museum of Printing is housed in a new building (having moved this past September from its North Andover, Mass., location, where it had been located since 1999). Romano explains that the one-floor layout offers more flexibility than the previous facility. The museum is filled with special collections and small exhibits, along with hundreds of antique printing, typesetting and bindery machines, as well as a library of books and printing-related documents. 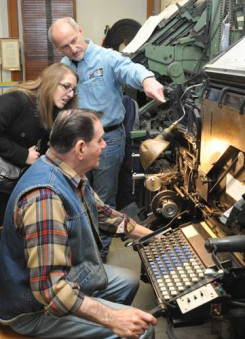 Saturday is Linotype Day at the Museum of Printing from 11 a.m. to 4 p.m.

“The Museum of Printing has a 6,000 book library and thousands of ephemera examples. It also has the only collection of phototypesetting machines in the world, and houses 3,193 boxes with the original drawings for every typeface produced for the Linotype,” Romano notes.

According to The Museum of Printing’s website, visitors begin their tour in the foundry era, which dates back 500 years. Exhibits explain the transition from hand-setting individual sorts of foundry type to mechanized hot-metal typesetting and highlights Linotype, Monotype and Ludlow linecasting machines. Visitors can also find a Monophoto and an Intertype Fotosetter, machines that attempted to use linecasting technology to transition to phototypesetting.

Also highlighted is the evolution of office communication, from Mimeographs, Graphotypes and Addressographs, plus a large collection of typewriters — including strike-on typesetters that produced inexpensive type which could be married to the then-expanding offset printing market.

In addition, the museum also houses the four original Apple Macintosh models. Romano worked with Steve Jobs on the font library for the Macintosh and Jobs would send him the latest computer model when it came out.

“Many visitors who have toured the museum have left fascinated with letterpress printing and join the museum to use its equipment, or [they] acquire a small press and some type and become printing hobbyists.”

Click here or on the image below to watch a YouTube video of Frank Romano and Kim Pickard, a founder of the museum (The Museum of Printing’s New Home: 5:16). 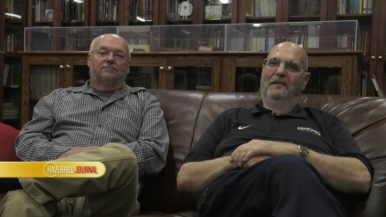 The Museum of Printing is located at 15 Thornton Ave., in Haverhill, Mass. The building contains a store, several galleries, two libraries, and meeting and workshop areas. The Main Gallery contains printing presses of all kinds. There are also two art galleries with rotating exhibits.