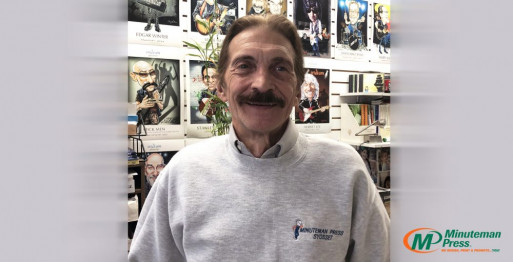 In 1971, Todd Brown began his career in printing through a special program that gave him paid work at the school district print shop. 50 years later, Todd shares his incredible story of longevity in the industry, which includes over 40 years as an integral employee of Minuteman Press in Syosset, N.Y. The Syosset franchise is one of the original ten Minuteman Press locations.

Todd says, “I started with Minuteman Press in September 1977. It was an entirely different business back then, and I was hired by Mike Jutt (Executive VP & Director of Training) as a press operator for the Syosset location. We had the original husband and wife owners and myself. I did whatever needed to be done and I already had six years of experience doing the kind of printing that we did during those early years.”

Speaking on his printing background before Minuteman Press, Todd shares, “The school district print shop is where I was first hired while I was in high school. I was able to learn how to run a printing press and it’s where I cut my teeth in the industry and learned how to deal with paper and ink. After graduation, I worked for several print shops. One of my jobs was with Hills Supermarkets doing their printing. I was laid off and that’s when I replied to an ad for Minuteman Press.”

Todd’s original run with Minuteman Press in Syosset lasted eight years. “I left for three or four years to learn more and take other positions. The owners reached out to me to come back and I agreed it was the best fit. I was now married, I had a house, and I agreed to come back to run the back of the shop and become Shop Manager.”

“I simply know printing and I love what I do. I always took the attitude of treating the shop and customers like it was my own. You can’t work in this business and say ‘that’s not my job.’ It’ll get you and the business nowhere.” -Todd Brown

Todd reflects on how the printing industry has changed over the years as well as how he has been able to keep up with the changes. “The entire industry has evolved. Digital printing is constantly changing as is technology.”

He further explains how he was able to adapt to new technology over the years: “When computers became more prevalent, I made it a point to learn graphic design on my own with whatever programs were available. I’ve been a musician my entire life so I would use different programs like Adobe PageMaker, Photoshop, and Print Shop Deluxe for passion projects but also to learn more about graphics from a printing standpoint.”

He adds, “As the business changed, I was able to pretty seamlessly move into that side of the business. When I created flyers for my band, I knew what I needed to do in terms of matching the design to the plates.”

“The main thing about the printing side of this business that most people don’t realize is that it’s still about paper. Paper is the one thing that has remained consistent no  matter what else has changed. Paper has certain characteristics and when you do a job, even digitally, you have to know the intricacies of the process. As a professional printer, you know what’s required in order to print, cut, bind, and assemble a job. If you want a button pusher, go to Staples.” -Todd Brown

For Minuteman Press in Syosset, their success and longevity all comes down to a team effort. Owner Mitch Parker has been running the business since February 2008, and Todd works hand-in-hand with graphic designer Denise to make sure jobs are fit to print.

Todd explains, “I am responsible for printing virtually any job that requires printing on digital machines. Denise does a fantastic job. She sets up the files, I double-check them, and then we go to print. We work together to make sure things are set up properly and I help fine-tune the printing end of everything. She has also taught me about the software and design aspects as well, which is really helpful.”

One of the biggest differences between printing for clients 40 years ago vs. today is how the artwork is provided. Todd explains, “Back when I first started, you essentially made the artwork for clients. They would bring something in such as a sketch and you then created the specifications required for printing. Today, you are given the artwork and a lot of the job is educating customers on print specifications. It goes back to the fact that paper is different than a smartphone or computer screen. A little knowledge can be dangerous when you need the bigger picture to really get the job done right. So that’s where we come in.”

Todd continues, “For example, we open up files from phones that are low resolution. We go back to the customer as early as we can in the process to make sure they are informed and to make sure the job goes out correctly. The quality of the finished product justifies the extra time in educating them and reaching out so it’s important to stay on top of customer-supplied artwork. It comes with experience.”

“Customers have changed dramatically. The 80-year-old lady that comes in probably knows more than the younger customers about printing. It’s important to educate all of our clients with the knowledge we have so we can produce the best finished products for them. Most of the time, they do come back and say how much they appreciate our work. Once they see the high-quality work we have done for them, they are thankful.” -Todd Brown

Outside of the business, Todd has taken up a new passion as his days as a musician have faded. “I am now 67-years-old so I am no longer doing as much music. Today, I am really into slot cars. I build tracks, I detail them, and I even create signage for the ‘town’ I’ve put together. I am on Facebook groups where people share their slot car photos. People have even asked me to make slot car signs for their towns after seeing my photos and the details I add. It’s a fun community.”

What are the key lessons that Todd has learned during his 50 years in printing? He answers, “Care, that’s the most important thing. Also, stay one step ahead of the customer and lead them in the right direction. You’re the professional, so use that experience to help them.”

END_OF_DOCUMENT_TOKEN_TO_BE_REPLACED
Happening Today
The Powerful Case for US Book Manufacturing