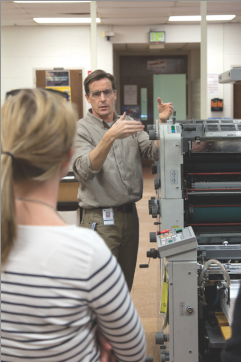 Being in the right place at the right time is something Michael Born knows something about. So when he was offered the printing technologies instructor position in 2008 at the Center of Applied Technology North (CAT-North) public career and technology high school in Severn, Md., he took it.

While Born does not have a background in education, printing has been in his blood for as long as he can remember. In 1937, Born’s grandfather — who came from Germany — opened Born Printing, a letterpress shop in Baltimore. The business, which specialized in the paint and coatings industry, was then passed down to Born’s father. Michael Born, along with his brother, also worked at the print shop throughout high school and college.

“After I graduated college, I didn't plan to go back to the shop. I wanted to get a job in the business world somewhere, and maybe return and take it over eventually when my dad was ready to retire. But they were super busy so they asked me to come back.”

When his father became ill, Michael Born found himself at the helm of the business. “By 1996, we reported over $3 million a year in sales and had 21 employees. We grew quite a bit and moved to a larger facility. We were quite successful though the 1990s and early 2000s.”

But that all changed, when in 2006, the company lost its biggest client. “My main customer was purchased by a larger company that had its own in-house printing facility, and we lost 60% of our business. I then made the decision to close the company. It was tough ... I sold off everything, found jobs for my employees and got my customers set up with other printers. I was ready to walk away and retire at 45 years old. Then, something happened where I almost lost everything.”

Born then took a job in a sales role at another printing company in Jessup, Md. While attending a trade show, he had an encounter that would change his life.

“I was talking to Art Stowe, who was the president of Printing & Graphics Association MidAtlantic (PGAMA) at the time, when Paul Foster, the current VP at Printing & Graphics Association MidAtlantic, walked up to Art and mentioned that he was looking for a printing technologies instructor at CAT-North. I said that I had thought about getting into teaching after I closed my company. Paul then recruited me.”

When Born took the job as instructor in 2008, he had no formal teacher training and had never taught in a traditional classroom. As a new teacher, he was required to take teaching classes but found that traditional teaching methods didn’t quite work when it came to operating printing presses, bindery and finishing equipment. “Teaching [how to run] an offset printing press is tough. There are so many variables, so many moving parts and components.”

Born then took a class that involved teaching through kinesthetic learning (teaching through movement). "I came up with this idea where the students became the printing press, which I called the 'Human Printing Press' where students learn the features and functions of the components of a printing press and act out the printing process in order to envision the system as a whole," he explains. "It was amazing once we did it. I even pulled in the administrators to pretend to be the paper running through the machine. It was a great way to get the students to actively be the machine, and a system that they could easily remember."

As part of his teaching strategy, Born also has his students interact with equipment and machinery on their first day of class. Under his guidance, the printing technology program at CAT-North provides students with marketable skills in traditional offset printing, as well as digital printing technology. The hands-on approach of the program ensures that students are familiar with all operations of a printing company — from file creation to job planning/estimating through final production and finishing.

A PrintED Certified Program, the printing technology program also taps heavily into industry support through its active advisory board.

Some of the equipment that Born uses in his class include two Ryobi 3302H sheetfed presses, a two-color Heidelberg QM 46 press, a Xanté Ilumina digital press, an Epson Stylus Pro 7900 wide-format printer driven by an EFI RIP and an HP DesignJet Z5600 wide-format printer.

On the binding and finishing end, the school also has a MBO folder with a right angle unit, a Baum 714 tabletop folder, a 30" guillotine cutter, a 10-pocket Duplo bookletmaker and a single-color screen printing setup. Students use iMac computers and Adobe Creative Suite software to lay out and manage digital files for print production.

Born says that the class is run just like a print shop where the students produce jobs for other schools. The proceeds are then used to buy the supplies needed for the class. Born adds that, with assistance from the Printing & Graphics Association MidAtlantic, the school will also offer an adult printing class in the spring and fall. 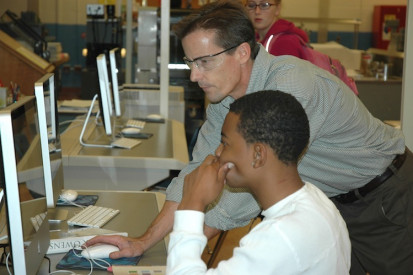 Born shows a student how to create tint swatches in Adobe InDesign.

When students enter the workforce, they are prepared for a career in printing production as a pressman or bindery operator, prepress technician, production planning, purchasing and customer service. In addition, the program assists them with resume prep and job interview training. "If a potential employer asks what the students do in class they need to be able to talk about what they're doing, to land that first job and be able to demonstrate it."

According to Born, in the past seven years, the program has been able to place 27 students in work study/internships. There are currently 13 still working in the industry. One of those is Chandler Kerr, who is a two-time national gold medal winner at SkillsUSA. He is also the U.S. representative for the World Skills competition, which will take place this October. Born was selected to be his trainer for the competition.

The program recently gained recognition by the Printing Industries of America (PIA) and was awarded the 2016 Frederick D. Kagy Education Award of Excellence. The program is being recognized for its innovative approach to preparing students for entry-level positions in the printing industry. During Born’s tenure, enrollment in the Printing Technologies program has increased by 70%.

“Mr. Born has turned the CAT-North program into one to be emulated,” relays Gary Habicht, board member of Printing & Graphics Association MidAtlantic and president of Printing Specialist Corp. "The kids involved are enthusiastic and thoroughly engaged in what they are doing. You can feel the level of excitement in the classroom, as compared to a few years ago, when it seemed to be just another class."

Born will accept the 2016 Frederick D. Kagy Education Award on behalf of CAT-North at the TAGA 2017 Annual Technical Conference on March 21, 2017, in Houston.

“When I first took this job, I would walk into the building each morning and remind myself that I was a good teacher. This award is a confirmation that I am doing it right.”