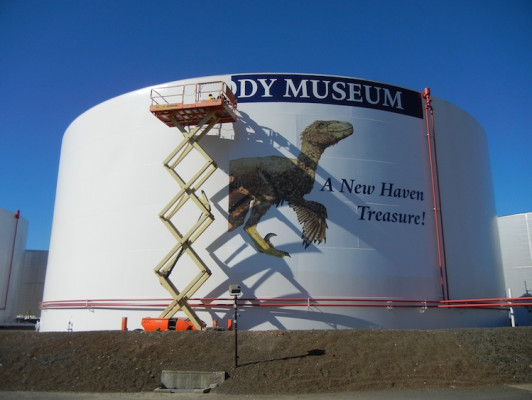 Merritt Graphics used in-house installers and a scissor lift to apply the graphics. 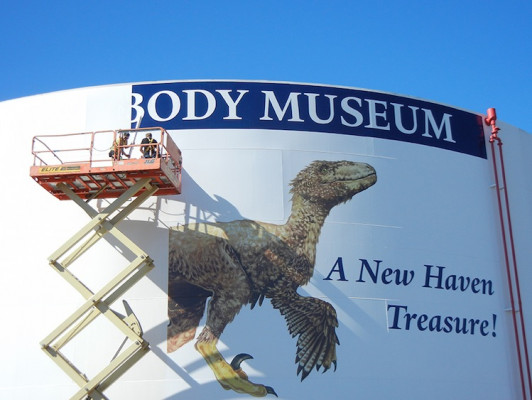 Installation of the mural took several days to complete. 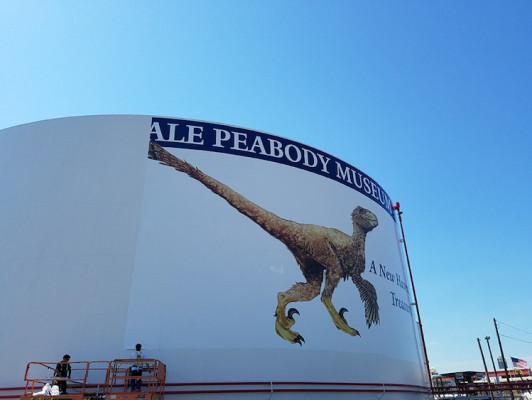 The new mural represents a modern view of an ancient creature. 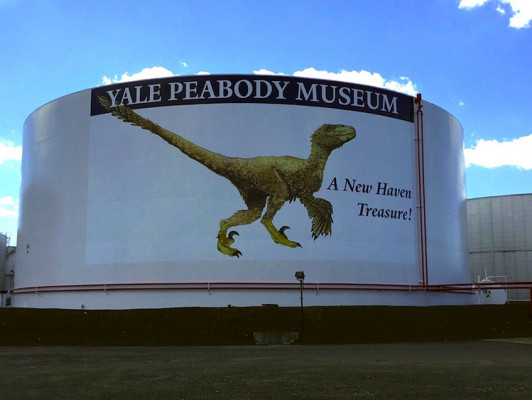 Deinonychus seemed a fitting choice for the mural to commemorate the Peabody’s 150th year.

EAST HARTFORD, Conn. — September 29, 2016 — Merritt Graphics was hired by Magellan Midstream Partners to honor the Peabody Museum and the City of New Haven with the production and installation of a new mural. The new mural represents a modern view of an ancient creature.

Two years ago a Connecticut icon was removed when Magellan Midstream Partners needed to perform tank coating maintenance at one of their New Haven facilities. For approximately seventeen years a segment of Rudolph Zallinger’s “The Age of Reptiles” was painted on one of the 90,000 barrel heating oil tanks. The mural paid tribute to the wonders of the city, specifically the Yale Peabody Museum. The city and the daily motorists who pass through New Haven on the Q Bridge should be delighted to see that Magellan and Peabody have teamed together to present a new icon.

The new mural depicts the feathered dinosaur, Deinonychus, designed by artist Bayla Arietta. The meticulous drawing is paired with the message: “Yale Peabody Museum ... A New Haven Treasure.” The Deinonychus was discovered in Montana in 1964 by John Ostrom, Peabody’s then curator of paleontology. Deinonychus seemed a fitting choice for the mural to commemorate the Peabody’s 150th year and as Peabody Director David Skelly notes, “an opportunity to show a 2016 concept of what a dinosaur looks like.”

The Deinonychus changed the previous perceptions of dinosaurs and prompted what is known as the Dinosaur Renaissance. When Ostrom introduced the idea of dinosaurs with feathers, other paleontologists were hesitant to agree with this claim; however Skelly explained that it is clear now that many of the meat-eating dinosaurs, such as Deinonychus, were feathered.

The experts at Merritt Graphics were recruited to produce and install the 72x36-foot mural. The Peabody provided a high-resolution scan of Arietta’s drawing and the team at Merritt set to work. The image was resized and divided into 54 inch panels. Merritt digitally reproduced the image on high performance 3M Envision Print Wrap Film with the patented 3M Envision Gloss Wrap Over lamination. This material was chosen due to its environmental sustainability and its conformability for long-term outdoor applications.

Merritt Graphics used skilled in-house installers and a scissor lift to apply the graphics. Installation of the mural took several days to complete. The team had several weather conditions to contend with including condensation on the tank, rain and winds.

The Peabody along with the City of New Haven are grateful for Magellan’s corporate investment in the city. “It is safe to say that this is the most prominent piece of public art in New Haven. Hundreds of thousands of people are regularly going to see this from the highway,” Skelly says.