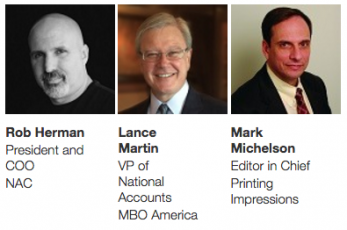 The key to efficient finishing, especially in digital production environments, is flexibility: being able to adapt postpress processing to varying job requirements as rapidly as the requirements change. NAC (North American Communications), the nation’s largest international direct mail supplier, has achieved precisely this degree of flexibility with the help of modular finishing technology from MBO.

Rob Herman, president and COO of NAC, explained how he did it on August 29 in a Printing Impressions webinar titled, “How To Streamline Postpress With A Holistic Approach To Finishing.” Lance Martin, vice president of national accounts for MBO America, gave an overview of the finishing solution that Herman credited with producing major gains in the efficiency and profitability of his postpress operations.

With plants in Pennsylvania, Texas, and Mexico, NAC produces more than 100 million direct mail packages per month using a combination of high-volume web offset and inkjet web equipment. Herman said that by supporting this output with a modular finishing line from MBO, the company has dramatically reduced job turnaround times, labor costs, and floor space requirements. These efficiencies have led to a “huge margin increase” in postpress profitability and are enabling NAC to expand into other kinds of products besides direct mail, Herman said.

Responsible for it all is MBO’s modular finishing technology, a variable machine configuration setup in which core finishing units – typically an unwinder, a sheeter, and an ejection unit – remain in fixed locations on the shop floor. Additional modules of task-specific finishing equipment are then moved into position to support the core units.

This lets printers produce almost anything in a two-stage process: load the job on press with no further touches until it is a fully printed roll; complete all remaining steps in one pass through the modular finishing line. This makes it possible to “touch the finishing once” instead of processing the roll in separate, time-consuming steps, Martin said.

MBO supplies modules for nearly all finishing requirements. With the core elements in place, a printer can work with modules used for work customarily produced or swap them out for new ones that correspond to other types of jobs. The model is ideal for printers who anticipate growth, because adding modules as needed is a more cost effective way of dealing with changes in volume and job formats than installing a complete new finishing line.

According to Herman, MBO’s modular finishing technology makes it “very, very easy to change from one job to the next,” usually in five to 25 minutes per changeover. Startup waste is also minimized.

Herman declared that NAC has been “blown away” by the gains in productivity and the improvements in profitability that MBO’s modular finishing technology has brought about. “Your margins go through the ceiling,” he said, adding that such increases can be hard to come by in the highly competitive direct mail industry.

He urged other printers to look beyond the acquisition cost of the technology and focus on its transformative effects. “I can’t emphasize enough how it will change your business model” in postpress, he said.

Printers will be in for a “pleasant surprise” when they discover the ROI that modular finishing technology can bring them, Martin added.

To learn more, listen to the full webinar here.