The Making of a Young Gun at All Color Printers in Deer Park, N.Y. 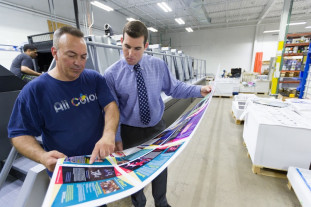 Steven Bogue (right) discusses color quality for a job being run on All Color’s six-color, 41˝ Heidelberg XL 106 with Push to Stop technology.

Billy Bogue has experienced the entrepreneurial printing business growth success story that seems to follow a familiar path. A rise in sales from year to year, driven by new equipment installations, enhanced production capabilities and opportunistic tuck-in acquisitions, coupled with the need to relocate several times in order to add more square footage. But, the story of All Color Printers, a Long Island-based trade printing establishment, also has a unique twist to its timeline.

It’s when Bogue’s eldest son, Steven, showed up at his father’s business in 2010 to announce that, at age 18, he wasn’t attending the local community college as planned. “I work here now,” the younger Bogue proclaimed. His father couldn’t have been happier.

“It was really what I wanted — to be able to teach my son the business and let him take over one day,” Billy Bogue recalls, despite the fact that Steven’s mother — who worked there as the office manager, but passed away in 2016 — wanted her son to go to college and pursue a different profession.

That fateful day, though, has turned out to be the best thing that could have happened for both Billy and Steven Bogue, and for the rapid growth spurt All Color Printers has enjoyed since then. The father-son relationship gelled right away. After a short time, they made the conscious decision to compete more heavily for price-sensitive bid work and trade-only jobs as a one-stop shop.

Steven Bogue is the president of All Color Printers.

By age 19, Steven Bogue had taught himself to operate All Color’s four-color, 29˝ Heidelberg Speedmaster SM-74 sheetfed perfector, in addition to scheduling all incoming jobs for maximized productivity. “Everything Steven looked at, he absorbed like a sponge,” his father recalls. As pressroom output increased, so did the need for bindery personnel. And the younger Bogue, now charged with hiring, would go on to hire the next 40 workers as the business continued to expand into the now-75-employee operation.

Billy Bogue’s younger son, Will, also came on board and has taken charge in several areas, including overseeing All-Color’s folding/gluing and diecutting activities, employee management and enhancing its website, among other responsibilities.

All Color was bursting at the seams by 2012. So, the Bogues relocated into their current 20,000-sq.-ft. main facility in Deer Park, N.Y., in April 2013. At the same time, they purchased a new five-color, 291⁄2˝ Heidelberg Speedmaster XL 75 with coater and implemented Heidelberg Prinect Prepress Manager software.

Again, Steven Bogue took charge to boost output productivity by opting to run it with two operators, rather than one. Defying conventional wisdom, the elder Bogue admits he was skeptical at first due to the added labor costs. The result: makereadies were cut to eight minutes, averaging 150 waste sheets. The press ran virtually non-stop at 15,000 sph — making it the second most productive XL 75 in the country, according to Heidelberg.

But the expansion moves were far from over. One year later, All Color acquired a 40˝ Bobst diecutter, a Moll folder/gluer and traded in its half-size SM-74 perfector for a four-color, 40˝ Speedmaster SM-102 perfector with coater, followed by a new Polar 137 cutter with Autotrim, and a Stahl TH-82 folder with Level 3 automation. From 2012 to 2016, All Color’s annual sales had skyrocketed from $6 million to $15 million.

All Color has also been aggressive this year from a CAPEX expenditure standpoint, led by the installation of a new six-color, 41˝ Speedmaster XL 106 straight press with aqueous coater to replace its XL 75. Equipped with Inpress Control 2, Intellistart 2 and a Wall Screen, All Color’s XL 106 is also only the second in the country to feature “Push to Stop” technology integrated with AutoPlate Pro, which enables jobs to be autonomously changed over without operator intervention.

All Color’s XL 106 has been clocking speeds of 18,000 sph and makereadies of only four minutes. “When we’re running form work, the press never shuts off,” points out Steven Bogue, who is also highly proficient at operating the XL 106. 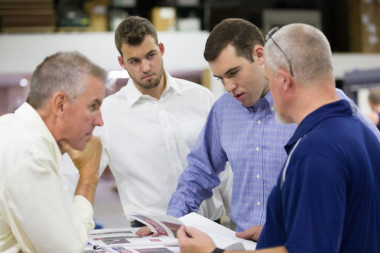 From left, Billy, Will and Steven Bogue confer about a job with one of All Color’s employees.

The 40˝-format positions All Color well from a competitive standpoint, according to Billy Bogue, who notes that during the height of the Great Recession in 2008, 11 shops on Long Island with 40˝ sheetfed presses shut down.

Future installations include a six-pocket Muller Martini Primera MC saddle stitcher, as well as a new folder/gluer so the company can expand into packaging. Completing about 60,000 job tickets per year, and requiring four vans and two box trucks to deliver its jobs, sales are on track to surpass the $16 million mark this year for the four-location operation.

Either way, Steven Bogue will ultimately make the buying decisions since he is now effectively running the entire company. “He signs the checks, schedules the presses, does the hiring and can run every machine in the shop,” points out Billy Bogue, who still helps out with estimating, despite taking last summer off and just buying a 40-ft. motor home.