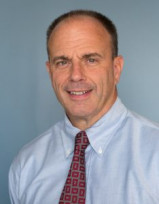 As one might expect when it comes to a proposed, $1.4 billion all-stock mega-deal, not all shareholders will be on board — especially when the stock values of the publicly-held companies involved plummet following the Oct. 31, 2018, M&A announcement. According to a Bloomberg Law article by Brian Flood, LSC Communications common shareholder David Wefer has filed a lawsuit in the U.S. District Court of Southern New York challenging the proposed acquisition of Chicago-based LSC Communications by Quad/Graphics, of Sussex, Wis.

Defendants of the suit include LSC Communications, as well as its CEO, Thomas Quinlan, and several directors of the company.

Wefer, who is represented by Monteverde & Associates, claims that on Dec. 12, 2018, the LSC board authorized the filing of a "materially incomplete and misleading preliminary joint proxy statement/prospectus with the U.S. Securities and Exchange Commission (SEC) ... that recommends LSC shareholders vote in favor of the proposed merger. While defendants are touting the fairness of the merger consideration to the company’s shareholders in the proxy," the lawsuit filing notes, "they have failed to disclose material information that is necessary for shareholders to properly assess the fairness of the proposed merger, thereby rendering certain statements in the proxy incomplete and misleading. 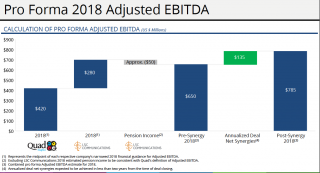 Quad/Graphics presented adjusted pro forma EBITDA calculations as part of its analyst/investor presentation when announcing the proposed acquisition of LSC. (Click to enlarge)

Consequently, Wefer's suit demands that material information he claims was omitted from the proxy be disclosed to LSC shareholders prior to the forthcoming shareholder vote. 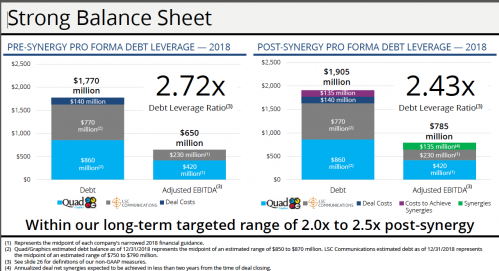 During an earlier call with analysts and investors, Quad/Graphics and LSC executives also indicated the combined company will have a lower debt leverage ratio after the deal gets finalized. (Click to enlarge)

When making the M&A announcement, Quad said it expects the transaction to be accretive to earnings, excluding non-recurring integration costs. Net synergies are expected to be approximately $135 million, and will be achieved in less than two years, through the elimination of duplicative functions, capacity rationalization, greater operational efficiencies and greater efficiencies in supply chain management. More specifically, the $135 million would comprise $60 million in capacity rationalization savings, $50 million in administrative reductions and $25 million in supply chain management efficiencies. 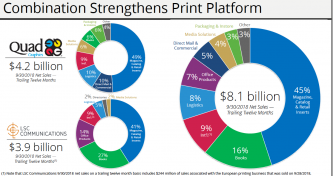 Here's a breakdown of both the individual and combined print product segment mixes once the acquisition is completed by mid-2019. (Click to enlarge)

Today, Quad is a $4.2 billion conglomerate that employs 22,000 workers worldwide with 55 manufacturing and distribution facilities.

Comparatively, LSC Communications — an enterprise formed two years ago as part of a three-company spinoff of RR Donnelley — is a $3.9 billion global company with 22,000 employees and 59 manufacturing and distribution facilities. Like Quad, LSC derives a large portion of its revenues from magazine, catalog and book printing. If consummated, the coupling will also provide Quad with an entrée into the office products business. The combined businesses would make Quad/Graphics an even more formidable printing industry powerhouse, especially when it comes to magazines and books. (Following the acquisition announcement, I wrote an analysis that can be accessed by clicking here.)

Quad/Graphics was ranked No. 2 on the 35th annual Printing Impressions 400 list of the largest printing companies in the U.S. and Canada ranked by annual sales, which was published in late December 2018 (click here to access the complete list). LSC Communications was ranked No. 3. Their combination — assuming shareholder and regulatory approvals — would make Quad/Graphics the largest printer in North America, surpassing the annual sales of RR Donnelley.