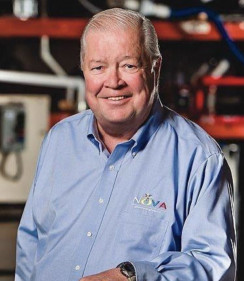 Ronald Joseph Rose passed away on Tuesday, March 2, 2021, at Baptist South Hospital in Jacksonville, Fla. He was 75 years old. Ron was a co-founder of Nova Pressroom Products in Jacksonville, Fla., and has been a dynamic figure in the printing and graphic arts industry for business for over 40 years. During his career with FUJIFILM, he served in a number of sales and business management positions including Vice President of New Business Development at Fuji Hunt Chemical.

He relocated to Jacksonville, Fla., in 1998 to take the role of Vice President of Sales and Marketing for Anchor Fuji Hunt a leading, longtime supplier of pressroom chemicals. Ron had extensive experience directing channel operations in Asia Pacific, Europe, and North America in his various positions. His career achievement was co-founding Nova Pressroom Products in 2007 with his long-time business partners.

In addition to his role as the President of Nova Pressroom Products, he was an advocate and active member of the NPES and chair of the government affairs committee, where he testified before Congress on behalf of the printing industry.

Ron was an advocate, mentor, an accomplished business leader, and a friend to many in the printing and graphic arts industry. He will be remembered and missed by all that knew him.

Sustainability: Green Strategies for Your In-plant