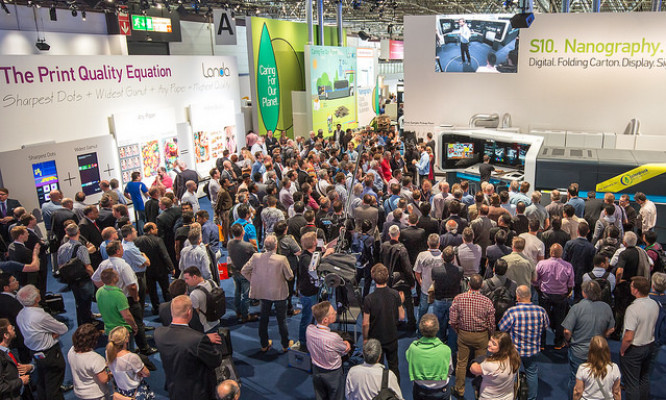 Visitors to the Landa stand had the opportunity to catch a glimpse of its 20 daily live press demos. 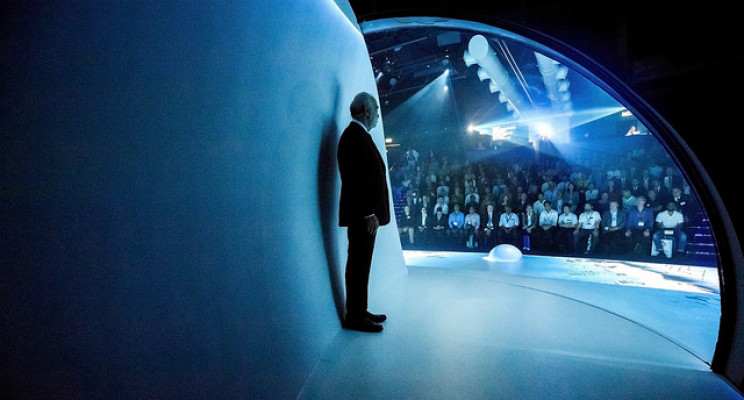 Benny Landa takes stage in the presentation, "Nano. The Power of Small."

An estimated 200,000 visitors thronged to the Landa stand to catch a glimpse of its 20 daily live press demos. Visitor enthusiasm translated directly into hundreds of sales meetings, with orders taken in all major geographical regions, including the Americas, Europe and Asia-Pacific. Landa reported numerous multiple-press deals, demonstrating market confidence in Landa and its Nanographic Printing presses.

"drupa 2016 will be remembered as the inflection point in the industry's transition from mechanical printing to digital. In the past, digital printing vendors had to try to convince the market that digital is the way to go. Previously it was a 'push' selling motion," says Benny Landa, chairman. "Now, for the first time, the situation has reversed. There is a very strong 'pull' from the market, driven by both customers and brand-owners, who are now demanding digital printing. It seems that the market leaders — in packaging, commercial printing and in publishing — have come to the realization that they simply must go digital."

He continues, "For Landa Digital Printing, this market awakening has been particularly rewarding, as reflected in the substantial number of orders which we took at drupa. Customers are telling us that no one comes even close to matching our quality, speed, substrate independence and print cost, which combine to create a tremendous value proposition."

Landa's theater presentations, "Nano. The Power of Small.", were fully booked days in advance and seen by 40,000 attendees.

Between theater presentations, there were live product demonstrations throughout the large arcade area of the Landa stand, with customers lining up to receive print samples after each demo. Each product demo was streamed to large video screens as hundreds jammed the demonstrations. Enthusiastic customers described the live demos as "awesome," saying "this changes everything" and that "Landa is light years ahead of the others."

"Everyone is leaving drupa with the understanding that Nanography is a game changer. It's the only digital solution for mainstream printing and its quality, speed, any-substrate capabilities and print cost are unmatched," notes Yishai Amir, CEO, Landa. "This is the reason printers, packaging converters and point-of-purchase specialists throughout the world ordered so many Landa presses — both sheetfed and web. In short, we had an amazing Drupa."

About Landa
Headed by Indigo founder, Benny Landa, the Landa Group is comprised of four units: Landa Digital Printing, whose Nanographic Printing presses bridge the industry's "Profitability Gap," cost-effectively combining the versatility of digital with the qualities and speed of offset to produce short-to-medium runs with the lowest cost per digitally-printed page in the industry; Landa Labs, the group's innovation arm, which explores nanotechnology for use in alternative energy, industrial coatings, cosmetics, packaging, drug delivery and other fields; Landa Ventures, which invests in early stage companies with complementary disruptive technology; and the Landa Fund, which helps underprivileged youth pursue higher education. Benny Landa continues to add to his portfolio of over 800 patents worldwide that provide the companies he founded with a solid intellectual property base.