RADEBEUL, Germany - May 8, 2018 - With QualiTronic NextGeneration, Koenig & Bauer is launching a revolutionary package of innovations for its inline measuring systems on Rapida sheetfed offset presses. QualiTronic NextGeneration provides a foundation for the restructuring of all inline measurement functions and a platform for further developments in the future. As already successfully implemented with regard to mechanical press components and software, a modular principle enables identical system hardware to be used for a variety of applications. Users can now combine

without needing to worry about the hardware configuration. 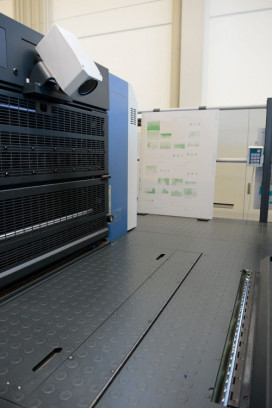 Outwardly, the QualiTronic NextGeneration cameras are hardly distinguishable from their predecessors. One new feature, however, is that PDF comparisons are also possible alongside color measurement and sheet inspection.

The fundamental benefit of using the same hardware to accomplish several tasks, compared to two or more separate systems, is that it is only necessary to invest in one basic system. Subsequently, there is only one system to be maintained.

Typically, installation space available on the press is limited. If a colour measuring system is installed in a particular printing unit, for example, it is not possible to integrate an additional inspection system. With QualiTronic NextGeneration, the configuration limitations which are unavoidable when using several separate systems have been overcome. The QualiTronic NextGeneration hardware can be installed at any position on the press. Colour measurement and inspection can thus both be implemented at the same location.

QualiTronic NextGeneration also introduces a completely new operating concept. The majority of the input forms and displays can be found at the same place as for all other functions of the press -- directly on the touchscreen monitor of the ErgoTronic console. Through optimizing the layout of the operating elements and significantly reducing the number of operating steps required to achieve a given task, work on the press has become even more intuitive.

Positive effects reported by users include considerably reduced training and familiarisation periods, the exclusion of operating errors, and the user-friendly visualisation of measured values. Important functions and displays can be called up with just two taps on the touchscreen monitor. Simple and clear graphic elements, in conjunction with an absolute minimum of text, facilitate fast and reliable operation.

QualiTronic ColorControl is the basic module of QualiTronic NextGeneration and serves to measure and control colour in an inline process. As already with the previous generation, the camera scans the entire area of every single sheet. The same proven fast inline colour regulation system then provides for especially rapid colour optimisation to help minimise the makeready time between two print jobs.

Many details have been further accelerated in the new version and brought into line with the demands of industrial print production. Functions such as the definition of the colour bars, job-specific data inputs and other previously manual processes have been eliminated. They now run in the background without operator intervention. The new measured value displays, and the reduction of these displays to simple graphic elements, are revolutionary. For the first time, Koenig & Bauer now presents the measured values vertically for the whole press, i.e. in a single view for all printing units.

Here, too, a new operating philosophy has been implemented. In the past, many inspection systems remained the domain of just a few experts due to their complicated settings and time-consuming operating steps. The new inspection system QualiTronic PrintCheck, by contrast, is readily accessible to every printer, not least because it requires no operator intervention at all. From start to finish of a print job, the system functions completely autonomously. Job data is imported in the background, and the inspection parameters -- once a science in themselves -- are determined automatically. QualiTronic PrintCheck even identifies the correct time at which to start production monitoring itself.

At the end of the job, finally, a simple job report is saved automatically as a PDF file, again without further inputs on the part of the operator. The makeready time for this system is thus effectively zero.

The alternative QualiTronic PDFCheck incorporates two new functions to complement QualiTronic ColorControl -- sheet inspection and comparison of the printed sheet against a pre-press PDF, i.e. the customer data. This function is especially interesting for Internet printers with their frequent job changes, as well as for production with gang formes.

Timely comparisons enable errors on the sheet to be detected before actual production commences. In the past, separate systems offering such functions were usually aimed at users working in security printing or for pharmaceuticals branch. QualiTronic PDFCheck, on the other hand, is intended to support also commercial and Internet printers.

A user-friendly interface and a host of practical functions assist operators in their daily work. The PDF comparison starts automatically, and it is only when QualiTronic PDFCheck detects any deviations that the operator is called upon to react.

Alongside these major innovations, the system offers a series of new report functions and options. QualiTronic ColorControl, for example, can be expanded with the following functions:

The whole range of measuring and control systems can be ordered and supplied with immediate effect.

Look Through the Mirror to Groom Your Successor