Eastman Kodak Company marked the 20th anniversary of Prinergy workflow technology during its 2019 Graphic Users’ Association conference in New Orleans, May 13-16.The event reviewed the continuing evolution of Prinergy and emphasized the benefits printing companies stand to gain by streamlining their production and business management tasks with the help of Prinergy solutions.

A print workflow consists of automated, interconnected, software-driven routines that steer a job from its digital origins to physical output, generating data that link the job to estimating, billing, MIS, and other administrative functions along the way. A first-generation version of Prinergy, developed by Creo, appeared in 1999; Kodak acquired the technology in 2005. Today, Prinergy supports all major printing processes across commercial and packaging, including offset, flexo, digital, and gravure.

In opening remarks, James V. Continenza, recently appointed as the company’s executive chairman, stressed that Kodak is in the workflow business to stay.

“Prinergy is not for sale,” he said, adding that neither is anything else still remaining in Kodak’s print production portfolio. “We are 100% committed to this space.” Continenza also reported significant progress in retiring Kodak’s corporate debt and promised to realign the company around the needs of customers by making it more transparent and responsive.

Todd R. Bigger, president of Kodak’s software division, admitted that to some extent in recent years, “we’ve lost our customer insight and connection” by putting the company’s priorities ahead of end-users’. That will change, he pledged, as Kodak refocuses on the kind of product support that Prinergy users enjoyed in the technology’s early days, “reigniting a culture of old” that the company will be true to.

“After 20 years, we’re ready for a midlife crisis,” Bigger said, adding that no longer will customers hear, “that’s not covered by your service contract” when they call for help with problems.

Prinergy also will remain a solution that meshes with other technologies printers rely on, according to Bigger. “We must be an open platform,” he declared. “We’re not just the be-all and the end-all, and never will be.” Kodak will work with other vendors to keep connections to Prinergy easy and intuitive, Bigger said.

The Prinergy workflow, currently in version 8.3, is to be made available at three escalating levels of engagement under a plan detailed at the New Orleans event. The levels are designed to move users increasingly in the direction of cloud-based, automated software management and support, with concurrent benefits of broader functionality, enhanced security, and greater access to data analytics. As described by Bigger and Steve Miller, product manager for software solutions, the levels are:

The bulk of the conference program consisted of panel discussions, workshops, and guest presentations aimed at identifying the advantages of working with Prinergy and promoting best practices for it. The sessions included testimonials from veteran users like Steve Sostak, integrated tactical planning manager at Fort Dearborn Co., where a PDF-based Prinergy workflow was first installed at one of the company’s locations 18 years ago.

At the time, Sostak said, the prepress department there had 20 people doing impositions, and layouts could take hours to complete. Today the prepress staff is down to three and will, according to Sostak, “get even skinnier than that.” With the efficiency of its rules-based automation, he said, Prinergy “has virtually eliminated imposition time.”

Thomas Quartier, CEO of QMC group, described how Prinergy’s rules-based automation accelerated a job consisting of 105 different books with varying page counts. Before Prinergy, he said, prepping the job could stretch across four to five days. In a Prinergy workflow, one person can complete the work in nine hours, turning the job into “a simple and easy thing to do.” 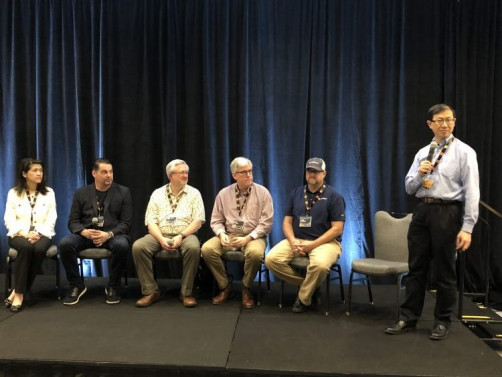 In a group discussion of Prinergy for packaging, Simmy Chow of PPC Flexible Packaging declared that the technology has saved the company “a lot of money, time, and headaches” in staying ahead of the 2,000 jobs it produces every month for customers who can be “super picky.” With Prinergy, she said, “put the file in, and two minutes later, it will be a plate file.”

In a pair of keynote addresses, Pat McGrew, a senior director for production software and solutions at Keypoint Intelligence, noted that while endorsements like these demonstrate the good that workflow automation can do, they aren’t being heard nearly often enough in the industry.

In fact, she said, “automation levels are stagnant across the U.S.” Given the pressure printers are under to produce more jobs in smaller quantities on shorter notice, “now, by 2019, shouldn’t we be fully automated in our shops?”

The fact that so few shops are is “really disturbing,” according to McGrew. She presented Keypoint survey data indicating that workflow was fully or mostly automated after job onboarding among only 15% of respondents. Better than 40% reported that all of their processes were manual or that processes were mostly manual in more than one department.

“We should be trying to automate as much as we possibly can,” she insisted, adding that an “automation-first mindset” pays off for shops that install workflow software and make full use of it. None of the objections to workflow automation that shops typically raise – for example, that they have too many different print engines to deal with, or that customer requirements are too complex – represents “an actual limiting factor” against automation, McGrew said.

“Without automation, she warned, “your margins will erode, and your business will suffer over time.” McGrew urged printers to prevent this by adopting smart print manufacturing (SPM), which she defined as “using advanced technologies and manufacturing processes to streamline inputs and optimize every stage of production, eliminating or minimizing manufacturing inefficiencies and errors while maximizing uptime and execution.”

Shops that embrace SPM, she said, will move along a five-stage path that begins in “disorder,” becomes “defined,” “digitized,” and “deployed,” and culminates in “smart.” As they proceed, their workflow profiles expand to include more tools for job onboarding, business and information management, process management, production, and logistics.

McGrew noted, however, that for most of the industry, “smart” is still a long way off. She said that in Keypoint consulting assignments, “we haven’t found a smart company yet – and we really, really want to.”