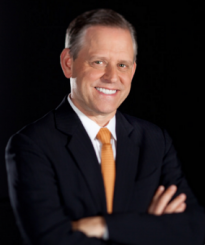 “An overall print market slowdown and rising aluminum costs have impacted our commercial print business,” said Jeff Clarke, Kodak CEO. “We are taking immediate actions to accelerate cost reduction and reduce investments to sharpen our focus as we continue to actively pursue changes to the Kodak product and divisional portfolio.”

The company reported a GAAP net loss of $46 million for the quarter ended September 30, 2017, a decline of $58 million compared with the third quarter of 2016.

The company ended the quarter with a cash balance of $342 million, down $28 million, or 8 percent, from the balance at the end of the second quarter 2017 and down $92 million from the balance at the beginning of 2017. The year to date decrease reflects investments in new technologies, working capital changes, capital expenditures including the construction of a new FLEXCEL NX manufacturing line in Weatherford, OK and a contingent consideration payment related to the divestiture of Kodak Alaris in 2013.

“We expect to generate cash in the fourth quarter of 2017,” said David Bullwinkle, Kodak Chief Financial Officer. “We plan to improve our cash balance through reducing working capital and through cost actions including focusing investments in technologies most likely to deliver near-term returns.”

Print Systems Division (PSD), Kodak’s largest division, had Q3 revenues of $232 million, a decline of $18 million, or 7 percent, compared with Q3 2016. Operational EBITDA for the quarter was $13 million, down $14 million compared with the same period a year ago. The decline was primarily due to pricing pressures.

For the quarter, KODAK SONORA Plates delivered continued growth, with volume increasing by 24 percent compared with the same period a year ago. SONORA Plates now account for 19 percent of the division’s total plate unit sales.

Enterprise Inkjet Systems Division (EISD), including the KODAK PROSPER and KODAK VERSAMARK businesses and the investment in ULTRASTREAM inkjet technology, delivered Q3 revenues of $33 million, compared with $47 million for the prior-year quarter. Operational EBITDA was $1 million, an improvement of $9 million compared with Q3 of 2016.

For the third quarter of 2017 the PROSPER business continued to deliver solid performance with year-over-year annuity growth of 9 percent.

The Flexographic Packaging Division (FPD) includes KODAK FLEXCEL NX Systems and Plates as well as other packaging businesses, such as analog flexographic plates and letterpress plates, proofing products and services. FPD revenues for Q3 were $34 million, flat with the same period a year ago. Operational EBITDA was $7 million, also flat with the prior-year quarter.

For the quarter, FLEXCEL NX revenues increased 2 percent over the prior-year period and FLEXCEL NX Plate volume continued to grow, increasing by 11 percent year over year.

Consumer and Film Division (CFD) revenues for Q3 were $55 million, flat compared with Q3 of 2016. Operational EBITDA was negative $2 million, a decline of $3 million compared with the prior-year period, driven primarily by lower volumes in industrial film and chemicals, vendor transition costs in motion picture film and the expected continued decline in the consumer inkjet business offset by a payment of contractual minimum royalties from a brand licensing arrangement. 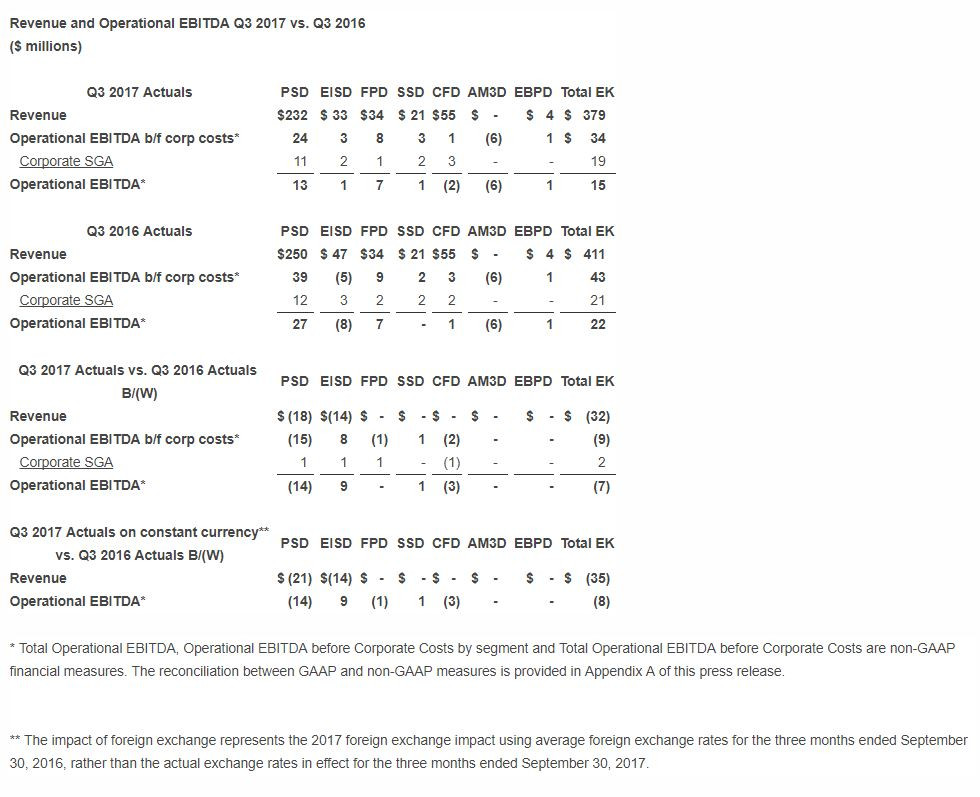