“I’m pleased we delivered a GAAP profit and met our revenue and Operational EBITDA goals for 2016,” said Jeff Clarke, Kodak Chief Executive Officer. “We continue to drive growth in our Sonora Plates and Flexcel NX packaging businesses and improve the quality of our earnings.”

Revenues in the fourth quarter of 2016 were $404 million, an 8 percent decline from the fourth quarter of 2015. On a constant currency basis, revenues in Q4 2016 declined by 7 percent compared with Q4 2015. The decrease was primarily driven by the expected continued decline in legacy consumer inkjet printer cartridge sales and pricing reductions in digital plates within the Print Systems Division.

“I’m encouraged by the significant year-over-year improvement in our use of cash,” said David Bullwinkle, Kodak Chief Financial Officer. “The repayment in full of our second-lien debt will reduce the use of cash for interest payments going forward and we expect to generate cash in 2017.”

Print Systems Division (PSD), Kodak’s largest division, had Q4 revenues of $279 million, a 4 percent decline compared with Q4 in 2015. Operational EBITDA for the quarter was $38 million, 3 percent better than the same period a year ago.

Print Systems Division had full-year 2016 revenues of $1 billion, an 8 percent decline compared with 2015. Full-year Operational EBITDA was $105 million, 6 percent better than the prior year. The decline in year-over-year revenues was due primarily to worldwide competitive pricing pressures and an unfavorable economic environment in Latin America. Highlights for the division include 9 percent year-over-year growth in unit sales of environmentally-advantaged Kodak Sonora Process Free Plates and continued success with Kodak Libra Plates and Kodak Electra Max Plates.

Enterprise Inkjet Systems Division (EISD) (which now comprises the Kodak Versamark business due to the classification of the PROSPER business as a discontinued operation) had fourth-quarter revenues of $19 million, down from $22 million in the same period in 2015. Operational EBITDA was $5 million, compared with $6 million in the fourth quarter of 2015.

For the quarter, the loss from discontinued operations, before income taxes, was $1 million, compared with a $7 million loss in the same period a year ago. PROSPER business EBITDA improved by $4 million for the quarter primarily due to an improvement in annuity revenues as well as lower losses on the sale of presses.

For the full year 2016, total PROSPER business revenue grew by 6 percent and the net loss decreased by $11 million due to lower depreciation and amortization expenses, better deal quality on presses and 40 percent revenue growth in annuities. The company continues the sale process for the PROSPER business and continues investing in the development of Kodak Ultrastream, the next-generation inkjet writing system.

Micro 3D Printing and Packaging Division (MPPD) includes Kodak Flexcel NX Systems and Plates as well as touch sensor films with copper mesh technology. Revenues for Q4 were $34 million, up $3 million compared with the same period a year ago. On a constant currency basis, revenues increased by $4 million, or 13 percent, from Q4 2015. Operational EBITDA for Q4 was $5 million, an improvement of $4 million compared with the fourth quarter of 2015. On a constant currency basis, Operational EBITDA improved by $6 million.

In Micro 3D printing, the division progressed favorably with several customer technical evaluations, including positive results on environmental reliability testing from both a tier-one global display integrator and a global brand customer.

For the full year, SSD revenues were $86 million, down from $112 million last year. Operational EBITDA declined by $5 million from the prior year, primarily driven by delays in government service contracts in Latin America.

Consumer and Film Division (CFD) revenues for the fourth quarter were $45 million, down from $63 million in Q4 of 2015. Operational EBITDA declined from $14 million to negative $2 million.

For the year, revenues for CFD were $216 million, down 18 percent from $265 million, driven primarily by a $32 million expected decline in consumer inkjet revenues. Operational EBITDA for the division was down $36 million for the year, driven by the reduction in consumer inkjet as well as investments supporting the Kodak Super 8 Camera and future camera platforms.

The division introduced the KODAK EKTRA Smartphone in 2016 and recently announced plans to reformulate and manufacture Kodak Ektachrome Film for both motion picture and still photography applications.

Intellectual Property Solutions Division (IPSD) had Operational EBITDA for the full year of negative $14 million, an improvement of $8 million from negative $22 million for 2015. This improvement is the result of the re-prioritization of the company’s research programs. The division expanded its efforts in developing new materials for 3D printing and light-blocking materials in 2016 and will continue in 2017.

Eastman Business Park Division (EBPD) had full-year 2016 revenues of $15 million, an increase of $2 million from the prior year. Operational EBITDA was $2 million, essentially flat compared to 2015. In Q4 the division announced the addition of the American Institute for Manufacturing Integrated Photonics’ (AIM Photonics’) Test, Assembly and Packaging manufacturing facility to the Park’s ecosystem. 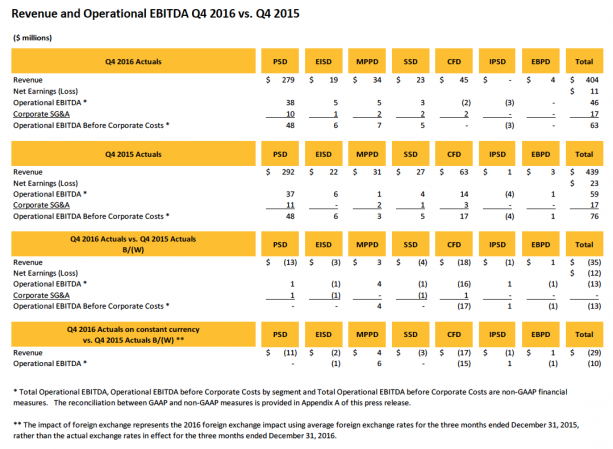 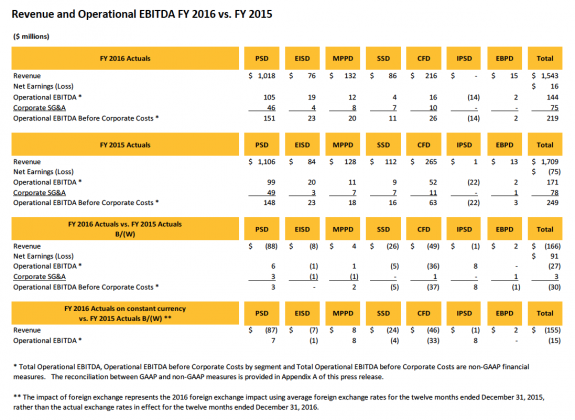