Keystone Paper & Box Co., founded in 1944, embodies a family-owned business's tradition, attributing much of their success to providing a superior buying experience coupled with best-in-class product quality; you could say it has been the keystones to their success.

When the opportunity to replace their aging fleet of offset presses presented itself, Keystone turned to Manroland Sheetfed and the Evolution printing press to fill their production capacity and springboard to a new press technology level.

Located in South Windsor, Conn., Keystone resides in a state-of-the-art facility with expansion room for the future. With a strong belief in sustainability, both for the ecological aspect as well as business practices, expertise, and products. 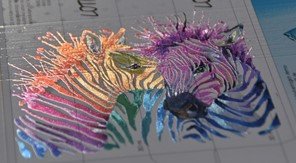 Keystone prides itself on offering its strong, diverse clientele a competitive edge. Most recently, they have experienced a large up-tick in demand for cosmetic packaging, pharma and carrier packaging segments.

Jim Rutt, President, and owner of Keystone Paper & Box, commented, "After researching 3 of the significant press vendors, we opted for Manroland Sheetfed & the Evolution Speed press. The press's technology from the color control and quality systems, the autonomous make-ready features, and more importantly, a fully integrated factory solution for cold foiling gives Keystone a competitive advantage."

The Evolution Speed packaging press is fully optioned, equipped as an eight-color with the 20,200 sph maximum rated speed, both cardboard and smart-card performance packages for quick changeover and ease of operation are included. It is further equipped with Simultaneous Plate Loading (SPL), which provides Keystone with the autonomous make-ready changeover of exchanging all printing plates in under one minute while simultaneously washing up the blanket and impression cylinder.

Bob Papa, Vice-President of Operations, noted, "When I was first introduced to the new state-of-the-art Manroland EVO Speed, it certainly caught my attention. Once we took a deeper dive into the features, it be- came apparent that this machine addresses fast make ready speeds and low waste in our critical short-run segment."

Additionally equipped with Manroland Sheetfed's UV-Total Flexibility package, Keystone is prepared to place Select-Dryer components at any of its eight print positions. 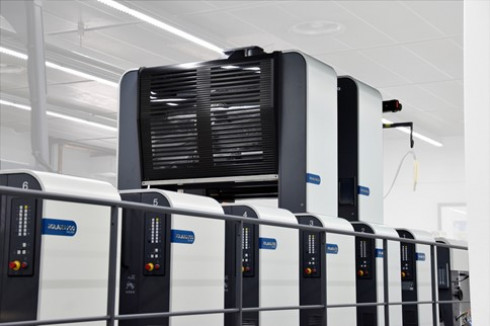 Jim Rutt further commented, "An integrated solution that offers savings we can pass on to our customers by indexing with full or multi-reel setups is a game-changer for us. The lowest savings percentage is 16% for the cylinder gap and upwards of 60% (layout dependent) with any variable in between."

One of the critical factors for Keystone included the Ecologic Pilot. This feature produces on-demand reports of the kWh utilization on the press.

Evolution press management with EcoPilot aids the print operation in understanding the press and press peripherals regarding energy consumption.

Keystone's requirements also included knowing their next press investment had to be the fastest production and make-ready press available. With the InlineColorPilot system for color quality and control, Manroland Sheetfed delivers an autonomous system; there is no requirement to re- move a sheet from the delivery to calibrate the system or create your OK sheet; it can be done in the press through the inline system.

The CIP files are uploaded to the Printnet server, downloaded on command to the PressPilot and the entire Evolution press makes- ready, after ink-up, the 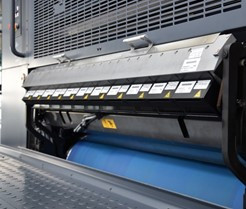 InlineColorPilot system automatically calibrates and controls color and register with just 3 sheets, in 3 control steps. No on-console calibration or color measurement is necessary.

The capability of color control doesn't stop at having the fastest, most fluid on the market, the InlineColorPilot. Keystone's latest press addition comes equipped with OKBalance. A system developed to measure the solid tones, 50% half-tones, gray balance mid-tone, and gray balance solid tone of the overprint.

This provides Keystone with the capability to print to gray balance. The single most effective measurement on the press considers more than 80% of the potential color variations possible, caused by paper, ink, water, and press temperature. The system's visual metrics will keep Keystones color control balanced to the OK sheet, taking into account variations of color/gray balance.

The Evolution Speed delivers this summer to Keystone Paper & Box and will be supported with Manroland Sheetfed's ProServ360 program with quarterly inspections and production monitoring through the exclusive TopAnalysis program, where the production and press performance is re- ported every 30 days and processes in and around the press are continually monitored to optimize press performance.