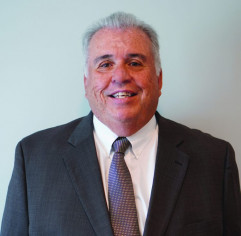 Entrepreneurs are a different breed than your garden-variety business person. Similar to an artist, they see the world a little differently. Whereas most look to accomplish the tasks put before them, entrepreneurs look to innovate. They find unique opportunities in the most routine of events. When life deals a rough hand, they somehow turn it into something positive. They take risks.

Ken Boone is one such person, and for those who know him professionally and personally, his induction into the Printing Impressions/RIT Printing Industry Hall of Fame this year comes as no surprise.

“Ken has consistently proven that the ability to recognize change as an opportunity, rather than a threat, is the key to success in our industry,” Joseph Maloy, president and COO of Polaris Direct, says. “His indefatigable spirit and ingenuity stand as an inspiration to many, just as his forthright nature and fair dealing set a standard we should all strive to attain.”

Boone grew up in the direct mail industry and, throughout the past 50-plus years, he’s adapted to the changes with his typical keen-eye, competitive approach. Semi-retired, Boone stepped down as president of Centreville, Md.-based Tidewater Direct earlier this year, but still remains actively involved.

“When I first started, printers were the primary contractors for the direct mail buyers.” Boone describes. “Direct mail has since become more sophisticated, targeted, and personalized. Printing itself has changed, of course; the big printing presses that used to run 5 million pieces before plates had to be changed are all dying. The majority of direct mail pieces now have some sort of impact, and that impact is caused by personalization.”

Boone traces his direct mail pedigree all the way back to age 13. “I was approached by a circular delivery truck (for Advertising Distributors of MD) and asked if I would deliver circulars door-to-door. At the end of the day, I would get paid $7.35,” he recalls.

“I got on the truck (it was a different era in our nation’s history when children under the age of 14 often worked), the driver said I did a good job at the end of the day, and that was the start of my direct mail career. When I returned to school after the summer, the truck would then drop the circulars off at my house and I would get paid by the piece.”

Boone was paid $75 to deliver 5,000 circulars. Most people would take that $75 and call it a day. But not Boone. He hired three helpers, paid them each $15, and kept the difference. At the age of 13, he had started his first business.

Advertising Distributors of MD was later acquired by Harte Hanks. Boone kept this job through college – he went to Shepherd University in 1971 on a football scholarship – often working weekends or summers.

Graduating from Shepherd University in 1976 with a degree in business management, Boone was hired full-time by the company as a junior sales rep. But when the founder of the company passed away and upper management struggled, the business declined.

In 1978, he opened Direct Marketing Associates Inc. (DMA) with three other colleagues. Two years after graduating from college, Boone had started his second business.

DMA was a small lettershop with door-to-door distribution services, which was an alternative mail delivery system, typically found in dense locales. During this time period, Boone also served as president of the National Association of Private Postal Systems, a network of companies that delivered food circulars, community telephone books, and product samples to private residences based on neighborhood saturation.

By 1985, due to new postal platforms such as marriage mail and shared mail, door-to-door fell by the wayside. Luckily, DMA was already producing direct mail, using laser technology to innovate with personalization. By 1999, the full-service, high-
volume direct mailing company occupied a 360,000-sq.-ft. building in Baltimore County, with $20 million in sales and a workforce of more than 500.

“During the 21-year-growth of DMA, we transcended from a company providing mailing services to printers to a company with data capabilities providing total package production of direct mail packages,” Boone explains. “The same printers that were once my customers were now my vendors.”

Under Boone’s direction, DMA became the first direct mail company to use trays and pallets instead of mail sacks, which streamlined the mailing process.

In fact, Boone worked with the U.S. Postal Service to further develop the system. “The first palletization rules were written by me,” he acknowledges. “The Postal Service was looking for ways to get mail across the country more efficiently and with better quality from better packaging.

“It was beginning to mechanize as it was putting in machines to read barcodes. Mail that came out of trays were in better condition and were easier to read,” he adds. “This new packaging process (trays on pallets) streamlined the handling of mail across the country and is standard operating procedure today.

In 1999 — at the height of the stock market bubble — Boone sold DMA to Harte Hanks. “Plenty of companies the same size as mine failed and went bankrupt that year,” he recalls. “But, we always innovated. We were always looking for what the customer was going to buy tomorrow, not just today.”

After Boone sold the business, he managed it for one-and-a-half years and attained record profits and growth. Suddenly, Harte Hanks terminated his employment. “My non-compete forbid me from going into the direct mail business, but specifically allowed me to go into printing,” Boone says.

Not one to sit around feeling sorry for himself, in 2003, Boone formed American Direct Imaging, a Baltimore-based direct mail continuous-form printer and the third business he started.

“Our purpose was to print direct mail continuous-forms for the industry,” Boone explains. “Our product was in demand and we achieved instant success.”

In 2006, Boone purchased the assets of Tidewater Publishing, a web offset operation with facilities in Centreville, Md., and West Branch, Iowa. Similar to what happened with Advertising Direct of MD, the company’s founder had passed away and the business had fallen on hard times.

Boone recognized there was a synergy with American Direct, and transformed the two companies into Tidewater Direct, a direct mail component parts supplier. At last count, Tidewater Direct’s 180 employees generated $35 million in sales, and the company is now in three locations.

As president of Tidewater Direct, Boone invested millions in equipment upgrades, from a six-color Goss Sunday 2000 web offset gapless press to a 10-color Sanden 1500 printing press and, most recently, a Screen Truepress Jet520HD inkjet web press with SC ink technology. Tidewater is also opening up a storefront for small-to-medium users of digital technology.

Boone’s printing industry IQ is well-known. “Ken has a great sense of manufacturing efficiency,” Henry Fry, owner of Fry Communications, points out. “He could make money on jobs we couldn’t. And, of course, he has a keen business sense. When I bought a small lettershop, he advised me on what was worth doing and what wasn’t. I wrote it down and look at it from time to time because it was so prophetic.”

Asked to name the reason for his company’s success, Boone stresses “we stuck to our game plan. We didn’t try to be a direct mail general contractor. At my former company, DMA, we were a direct mail general contractor. We personalized, assembled the product, addressed the envelopes, and entered it into the mail stream. We managed that entire process. Now, our business model is to sell component parts to those same companies.” 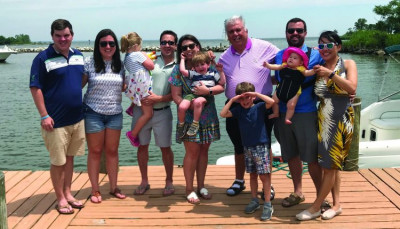 Ken Boone gathered with his three children, their spouses, and his grandchildren to celebrate Father’s Day last month.

Earlier this year, Boone promoted Geoffrey Eisenberg — who also happens to be his son-in-law — to the position of president of Tidewater Direct. “While I continue to be involved on a daily basis, the future of Tidewater now firmly rests in his very capable hands,” Boone says.

“Having Ken Boone as a mentor has been one of my greatest life experiences,” Eisenberg says. “Ken has the unique ability to see the big picture, understand what truly matters, and filter out the rest. He combines that with an incredible sense of determination and resilience. Perhaps I’m biased, but I see him as one of the industry’s greatest competitors and assets.”

Boone is also extremely proud of his “three wonderful children.” Jennifer, his oldest, is married to Geoffrey and works for the company in the Centreville, Md., location as an account manager — while she also manages their three children, ages 3 to 6 years old.

Brandon managed the West Branch, Iowa, facility for two years until he got his law degree and is now an international tax attorney for a Big 5 accounting firm. He is married and has a four-month-old daughter.

A true competitor, Boone has always been athletic. He played football at Shepherd University — a strong Division 2 team. “When I was in the direct mail business, I played tennis every day at 7 a.m. and was in the office by 9 a.m. I did that six days a week for 15 years. At the age of 45, I switched to golf.”

While work continues to dominate his daily living, Boone also has a home in Florida and enjoys golf trips there.

“I was elected to my high school (Patapsco) Hall of Fame for football in 2016,” Boone notes. In 2003, Shepherd University named the field house after him, as a tribute to his fundraising efforts — not his prowess on the football field, Boone is quick to point out.