WÜRZBURG, Germany — August 11, 2016 — Alongside a successful drupa trade show, the second quarter of 2016 for the Koenig & Bauer Group (KBA) was characterized by strong order figures, revenue and earnings. At €352.5m group order intake from April to June was up 17.2% year-on-year, although the group’s figures for this quarter only contain around a third of orders placed at the trade show which were in the triple-digit million euro range. The catch-up effect will ensure additional stimulus in the second half-year as KBA traditionally only book orders that are fully documented and financially secure.

After six months, group order intake of €618.8m was 1.9% higher than the strong prior year. Revenue increased over the same period by 29.7% to €553.9m and order backlog rose 7% to €639.8m. KBA President and CEO Claus Bolza-Schünemann shares, “This is a solid buffer for the second half-year and gives us ample security to raise our targets for 2016 despite existing economic and political turbulence. We now expect an EBT margin of around 4% with group revenue between €1.1 and €1.2bn.” 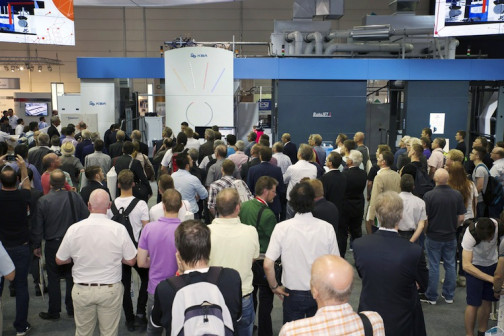 Revenue and Earnings on Track
A rise of 30% in revenue compared to 2015, solid capacity utilization at KBA’s facilities and cost savings from the restructuring program completed at the start of the year had a positive impact on earnings after six months despite high trade show and development costs. EBIT improved to €20.7m compared to the prior-year loss of -€8.3m. A slightly negative interest result of -€2.9m led to a group pre-tax profit (EBT) of €17.8m. After deducting income tax expenses, group net profit came to €17.2m (2015: -€9.3m). This corresponds to earnings per share of €1.05 (2015: -€0.55).

Continued Solid Net Liquidity
The increase in inventories for the sales volume anticipated in the second half of 2016 and the rise in receivables following higher deliveries strained the net inflow of funds. Nevertheless, compared to the prior year (2015: -€28.9m) cash flows from operating activities improved markedly to -€10.6m thanks to the company’s solid earnings. The free cash flow stood at -€14.4m, compared to -€25.2m twelve months ago. Funds at the end of June 2016 came to €168.7m. Less bank loans, KBA’s net liquidity stood at €154.5m. Despite a group net profit, a decrease in the discount rate for domestic pensions from 2.4 to 1.6% led to a slightly lower equity ratio of 25.5% (end of 2015: 26.5%).

Growth in All Three Segments
Trade show drupa brought in orders in the triple-digit million euro range for KBA’s largest segment, Sheetfed. Around a third of these orders were already visible in the group’s figures for the second quarter and the other two thirds will be booked in the coming months. At €290.8m order intake with unchanged good margins was on track. However, given the weaker economy in some key markets it did not reach the prior year’s high figure of €368.1m. Revenue was up 22.1% to €291.7m compared to the previous year. Order backlog at the end of June came to €281.9m. Although all expenses tied to drupa and the development of a new digital sheetfed press have already been recorded as costs, segment profit rose to €8.6m (2015: €3.8m).

At €66m order intake in the Digital & Web segment was similar to that of the prior year. Revenue rose by over 75% to €64.5m with digital presses for the decor and corrugated markets making a key contribution. Order backlog remained solid at €71.8m. Although development expenses for the growing digital printing market impacted on earnings, the segment loss was reduced further to -€0.9m (2015: -€8.9m) thanks to a profit in the second quarter. This segment is well on its way to achieving its annual target of a profit.

The increase in demand in security, metal, coding, flexible packaging and direct glass decorating drove order intake in the Special segment up 47.7% to €294m year-on-year. Additionally, revenue rose by a sizeable 37.7% to €233.9m compared to the previous year. At €310.2m order backlog at half-time was 38.2% higher than 12 months ago. The increase in revenue and catch-up effect from a large security project which is now complete led to a segment profit of €20.1m in the second quarter. This segment’s EBIT after six months grew to €20.3m (2015: €3.6m).

5,201 employees were on the KBA group payroll at the end of June 2016, 65 fewer than the previous year. Excluding apprentices, trainees, employees exempted from their duties and staff on phased retirement schemes the group workforce sank to 4,719. 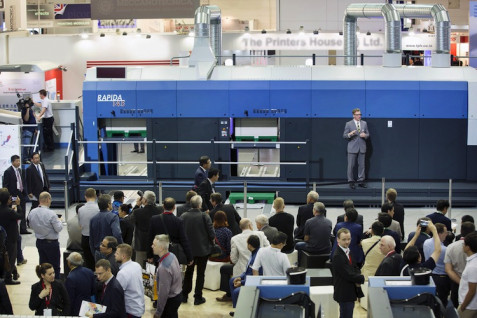 KBA-Sheetfed underscored its solid footing in folding carton printing with the largest sheetfed offset press at this year's drupa, and the presentation of a digital sheetfed press developed in alliance with the Xerox Corp. in America for this segment. It is expected to be available for delivery in 2017.

Revenue and Earnings Targets Raised for 2016
The KBA group is also confronted with unfavorable global economic conditions. Nevertheless, the positive book-to-bill ratio with a rise of 30% in group revenue in the first six months compared to 2015, high order backlog, a raft of promising customer projects and the growing service business, have prompted the KBA management board to raise its revenue and earnings targets for 2016.

KBA’s Sheetfed segment which has an outstanding footing in packaging printing is on track to reach its revenue and earnings targets for 2016. This facilities’ high workload extends beyond the turn of the year with the existing volume of orders. The management board is targeting a profit in its Digital & Web segment by the end of the financial year. In the Special segment KBA anticipates clear growth with a significant earnings improvement in 2016. The security business almost doubled order intake compared to 2015. Incoming orders from the flexible packaging printing and hollow glass container decoration markets also rose by two digits.

With this in mind and given positive revenue and earnings in the first half-year, the KBA management board is targeting a rise in group revenue above its initial planning to between €1.1 and €1.2bn, as well as an increase in the EBT margin to around 4%.

The financial statements can be downloaded as a PDF here.