WÜRZBURG, Germany — March 24, 2016 — The Koenig & Bauer AG (KBA) financial statements for 2015 underline the press manufacturer’s successful group realignment within the past two years. At €1,025.1m group revenue met its target of over €1bn. The decrease in revenue compared to 2014 (€1.1bn) was the result of the security press business and lower sales in the Digital and Web segment due to the realignment. CEO Claus Bolza-Schünemann comments, “We made good progress with our strategic goal of increasing revenue in growth markets packaging and digital printing and thus reduce our dependency on the cyclical security business and media-driven publication printing. Packaging now makes up some 70% of group revenue with new presses, followed by security printing at around 20%. Media exposure now only totals around 10%.” 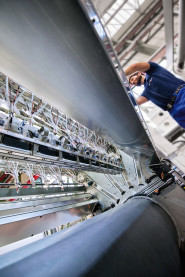 The high-performance digital web presses are assembled by KBA-Digital and Web Solutions in Würzburg, Germany.

Bulging Order Books
Group order intake increased sharply year-on year (€956.9m) with a plus of 23.6% to €1,182.7m. At €574.9m order backlog at the end of 2015 was €157.6m higher than the prior year due to a double-digit percentage rise in new orders across all segments. This ensures a solid level of capacity utilization until the industry’s leading trade show, drupa, at the end of May 2016.

EBIT Climbs to €35.9m
Restructuring production and the Digital and Web segment led to cost savings which are expected to have an even greater impact in 2016. Despite wage increases and additional costs to cushion peaks in capacity utilization, EBIT rose significantly to €35.9m compared to €13.3m the year before. At €65m earnings before interest, taxes, depreciation and amortization (EBITDA) were also up clearly on the prior-year figure of €41.9m.

EBT Margin Approaches 3% — Net Profit at €27m
With group earnings before taxes of €29.7m (2014: €5.5m) at 2.9% the EBT margin surpassed the company’s forecast of up to 2% of sales. Contrary to previous concerns, the group’s Sheetfed segment generated higher revenue in the fourth quarter without any major additional costs and its segment profit thus exceeded expectations. At –€6.2m the interest result was also an improvement on the previous year (2014: –€7.8m). KBA posted a net group profit of €26.9m in 2015 (2014: €0.3m) after tax. Earnings per share were up accordingly from €0.03 to €1.62. KBA will not propose a dividend payment for 2015 in view of the holding’s retained loss which has not been offset by the net profit yet.

Strong Sheetfed Segment Performance
KBA’s sheetfed segment performed particularly well. At €561.7m revenue in the group’s largest business unit was up 6.9% year-on-year thanks to growth in the packaging market. Following a prior-year loss, this segment’s profit of €25.5m is considerable. The growing service business contributed to this increase. A 55.8% rise in order backlog year-on-year to €282.8m towards the end of the year ensured good capacity utilization.

Digital and Web on Course for Profitability
The company’s significantly scaled back Digital and Web segment achieved the turnaround in the fourth quarter of 2015 with EBIT of €1.3m. Despite low annual revenue of €98.4m the segment result improved from –€13.3m in 2014 to –€10.9m in the transition year 2015. Digital and Web is expected to generate higher sales and a profit by the end of 2016 given the 22.7% rise in order intake to €117.8m. KBA anticipates the alliance with HP in the corrugated packaging sector and its own RotaJET press series to make a growing contribution to its digital printing business. 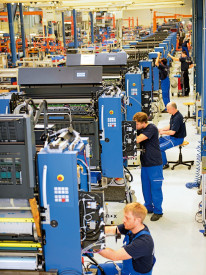 Orders, revenue and earnings were especially pleasing in KBA’s Sheetfed segment in 2015. The printing unit assembly lines at the facility in Radebeul were extremely busy.

Security Press Orders up in Special Segment
The 29.8% rise in order intake in the Special segment to €477.7m (2014: €367.9m) was primarily the result of a climb in new orders for security presses and coding equipment. In spite of higher sales in flexo and metal decorating, at €422.9m revenue in this segment for the entire year was below the figure for 2014 (€474.5m) due to lower security press sales. Segment profit thus sank from €57m to €27.7m year-on-year.

Export Level at 85%
The export level stood at 85% following domestic sales of €153.3m. The proportion of group revenue generated in the rest of Europe sank from 35.5% the year before to 29.4%. In contrast, the share of the group total attributable to North America climbed from 10.7% to 14%. Despite weaker growth in China, Asia and the Pacific’s contribution rose from 23.9% to 32.7%. Weak currencies and unstable political issues acted as a break on investment in Latin America and Africa. The proportion of revenue fell from 13.5% to 8.9% of the total.

Redundancy Payments Strain Cash Flow
Despite higher earnings and the rise in customer prepayments from €129.7m to €141.7m, cash flows from operating activities of –€15.3m were clearly below the strong prior-year figure of €43.2m. Payments amounting to some €40m as part of the restructuring were a decisive contributory factor. After deducting funds for investments the free cash flow stood at –€23.7m.

Personnel Adjustments on the Home Straight
At the end of 2015 there were 5,249 employees on the KBA Group payroll, 482 fewer than at the end of 2014. Excluding 378 apprentices, trainees, employees exempted from their duties and staff on phased retirement schemes, the total stood at 4,645. This number is expected to shrink to around 4,500 by the end of 2016. KBA’s training level remains above the industry average at 7.2%.

Outlook: Increased Revenue with Improved Earnings
In 2015 press manufacturers profited from strong demand for consumer goods. According to VDMA statistics, order intake for printing equipment in 2015 was up 8.8% year-on-year in real terms. Weaker demand has been visible in China and other markets since the fourth quarter of 2015.

The KBA management board’s comment in the financial statements states, “It is not an easy task to compensate for lower sales expected in large single market China with more business in other countries. Our expanded portfolio for the growing packaging and digital market as well as our strong footing in special markets less driven by the economy, such as security printing, are beneficial. Solid order backlog secures the utilization of our capacities until the Drupa trade fair at the end of May. Thanks to new products for the future markets in focus we expect the trade fair to boost demand for the second half-year 2016.”

Assuming conditions for KBA’s global business do not deteriorate significantly, the management board is targeting an increase in group revenue to around €1.1bn and an EBT margin between 3 and 4% in 2016. Given the volatile business environment, the management will provide a more detailed outlook as part of its interim reports.

The financial statements can be downloaded as a PDF file here.