KBA Achieves Growth and Profitability with a 14% Increase in Revenue

WÜRZBURG, Germany — March 22, 2017 — Backed by a significant increase in revenue and profit, the Koenig & Bauer group largely achieved or even exceeded the medium-term targets that it had issued at the beginning of 2015 with unprecedently high margins in 2016. “The profitable growth was generated in existing and new packaging markets, from industrial applications in digital web printing and the continued expansion of service business – despite the absence of any macroeconomic support,” said CEO Claus Bolza-Schünemann. “With all segments operating profitably, we were able to achieve a further goal,” added CFO Dr Mathias Dähn. “After a decade of declining revenue and unsatisfactory margins, we want our shareholders to receive a fair portion of this success. Accordingly, the management board and the supervisory board will be asking the shareholders to approve a dividend of €0.50 per share at the annual general meeting on 23 May 2017.”

Despite persistently challenging global economic and political conditions, the group recorded robust order intake of €1,149.7m, only slightly shy of the previous year’s figure (€1,182.7m). At €557.5m, the order backlog at the end of 2016 remained at a high level (2015: €574.9m). With the revenue structure continuing to shift in favor of the markets of the future, group revenue came to €1,167.1m, 13.9% up on the previous year’s figure of €1,025.1m. Driven by growth in the rest of Europe, Northern and Latin America as well as Africa, the export ratio came to 85.5% and was thus slightly up on previous year’s already high level (85%). Business in Asia/Pacific was impacted by the softer economy in China.

EBT Guidance of Up to 5% Reached in Full

Increased revenue accompanied by improved margins, consistently high capacity utilization and the sustained reduction of the cost base following the successful completion of restructuring underpinned the increase in profit, which reached the highest level in the Company’s 199-year history. Adjusted for non-recurring income, EBIT and EBT climbed to €62.9m and €56.8m, respectively. At 4.9%, the EBT margin guidance of up to 5% was achieved in full. Besides these operating factors, earnings were driven by non-recurring income of €22.4m from the mandatory write-ups of property, plant and equipment and the recognition of deferred tax assets of €7.4m. Group net profit rose more than three-fold to €82.2m (2015: €26.9m), equivalent to earnings per share of €4.98 (2015: €1.62). 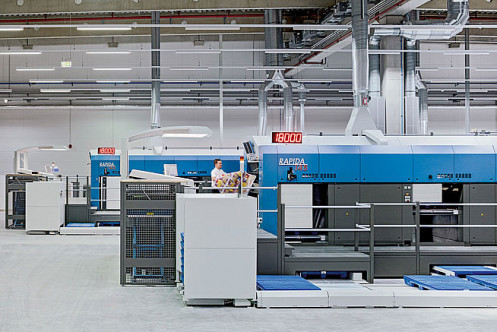 The Sheetfed segment widened its share of the global market to around 25% for sheetfed offset presses and to substantially more than 60% for large-format presses.

Thanks to the growth in the packaging market and substantial market share gains, the Sheetfed segment posted a 9.5% increase in revenue to €615m. Despite high fair and development expenses, EBIT climbed from €25.5m to €31.3m, underpinned by the higher revenue in tandem with improved margins, strong capacity utilisation and the growth in service business. After the expected slowdown in post-Drupa business we achieved with a good Q4 an order intake of €569.7m (2015: €663m).

Driven by growth in service business and in new digital printing applications, Digital & Web performed well, becoming profitable with EBIT of €1.9m despite the strain caused by development expenses. With order intake up 28% to €150.8m, revenue rose by 59% to €156.5m. Koenig & Bauer expects the partnership with HP in the corrugated packaging sector and its own RotaJET series to make a growing contribution to its digital printing business. 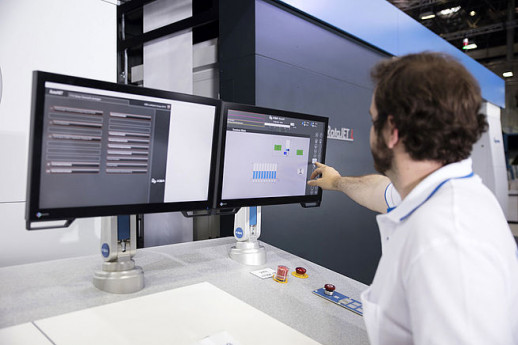 Order Intake, Revenue and Profit Up in the Special Segment

The substantial increase in free cash flow from –€23.7m in the previous year to €2.3m contributed to a rise in liquidity to €202m (31 December 2015: €186.3m). With its ample net liquidity of €168.1m as well as the cash and guarantee facilities of €80m and €237.2m, respectively, Koenig & Bauer has a stable funding base. In addition, sufficient funding is available for intensifying activities in growth markets and for spending on efficient production and IT processes. The solid balance sheet structure was additionally improved with the increase in the equity ratio to 31.1% (2015: 26.5%).

In 2016, the group workforce increased by 69 to 5,318 employees. In addition to specific recruiting in the expanding service segment and for new applications for the packaging and digital printing markets, 60 employees joined the group with the acquisition of Iberica AG as part of the entry into the growing market for flatbed die-cutters.

“Despite the persistently challenging conditions in the global economy particularly in the light of recent political developments, we are facing 2017, the year of our company’s 200th anniversary, with confidence,” said Claus Bolza-Schünemann. “Should conditions for our global business not significantly deteriorate, we target an organic growth of up to €1.25bn in group revenue and an EBIT margin of around 6% in 2017.” 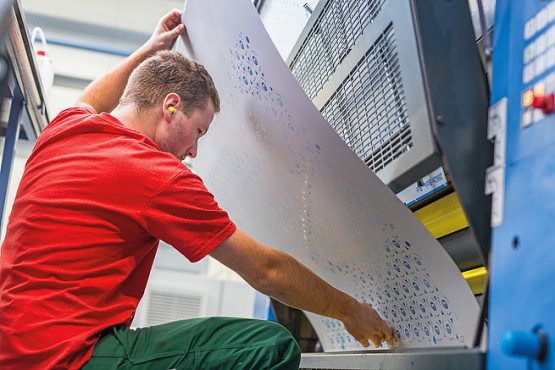 KBA-MetalPrint has started up the first Mailänder 280 printing and coating line which prints solely aluminium panels used for making booming longcaps for bottles of high-quality spirits.

The KBA management board wants to increase group revenue organically by around 4% per year until 2021. More than half of this growth will be generated in packaging printing. Further growth is to be generated by the expansion of the service business in all segments as well as by market share gains. “Our declared aim,” said Dr Mathias Dähn, “is for all business units to contribute to growth in the future. As higher equipment revenue is not expected in security printing, we are exploring further options for growth including strategic partnerships in the banknote life cycle.”

“We don’t want growth at any price. Rather, what we are seeking is profitable growth,” explained Dr. Mathias Dähn. “Depending on global economy, end markets and the necessary investments in growth, the group is targeting an EBIT margin of between 4% and 9% for the period until 2021. An increase of €70m in profit is to be achieved through the optimisation of the security printing business as well as growth in services (around €20m in either case) together with an integrated production network and strategic purchasing (around €15m in either case).”

A further strategic goal entails efforts to strengthen the group’s stability by reducing volatility and risks. Greater earnings stability is to be achieved by lifting the share of revenue from service business to 30%. Starting in 2017, around one third of the pension liabilities will be funded externally in up to five annual steps to reduce risks in the balance sheet arising from longevity and fluctuation in interest rates.

Further targets include a dividend ratio of 15-35% of group net profit, an equity ratio of over 45% and a working capital target corridor of 20-25% of revenue.

Click here to view KBA's figures at a glance.

The annual report for 2016 is available as a PDF file and can be downloaded at https://www.kba.com/en/investor-relations/financial-reports/