KBA to Celebrate 200 Years: From the First Cylinder Press to Digital Print 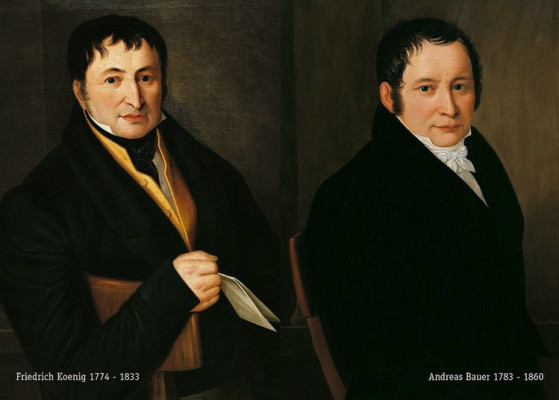 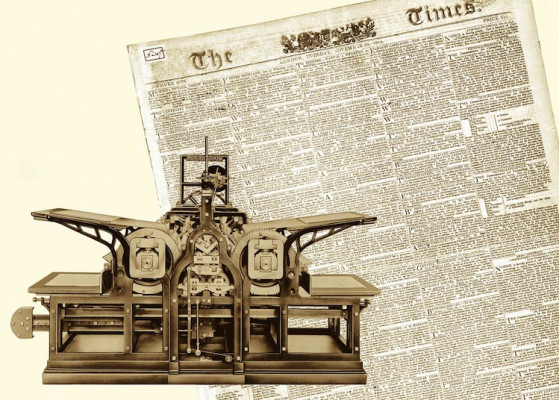 November 29, 1814: The London “Times” was the first newspaper to be printed on the double-cylinder press designed by Friedrich Koenig and Andreas Bauer. 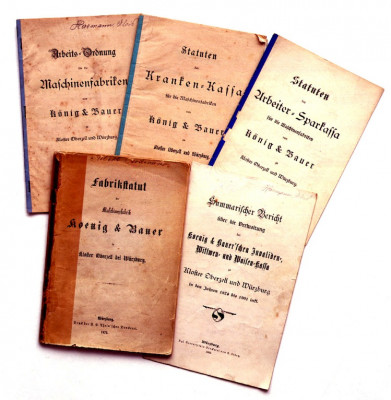 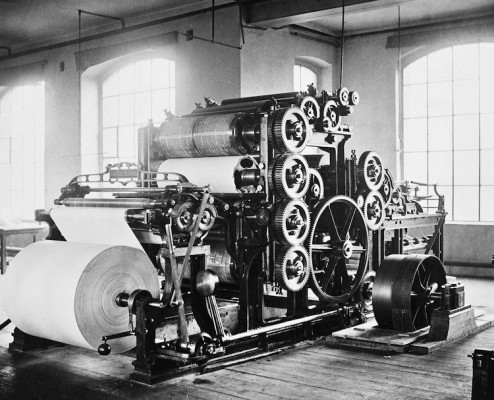 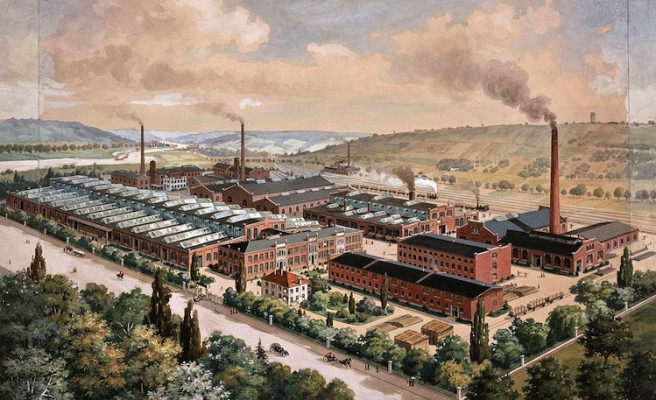 A new factory was built on the site of today's headquarters in 1901. 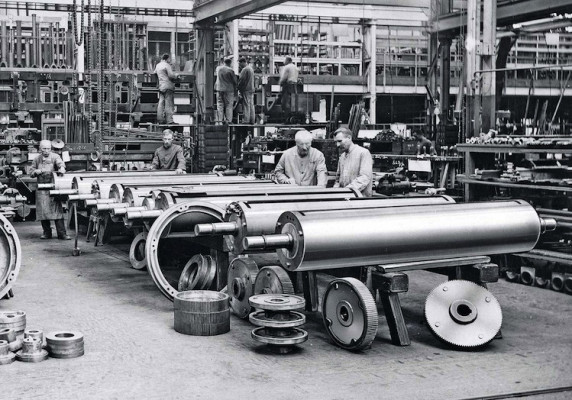 Cylinder assembly in the new factory in the 1920s. 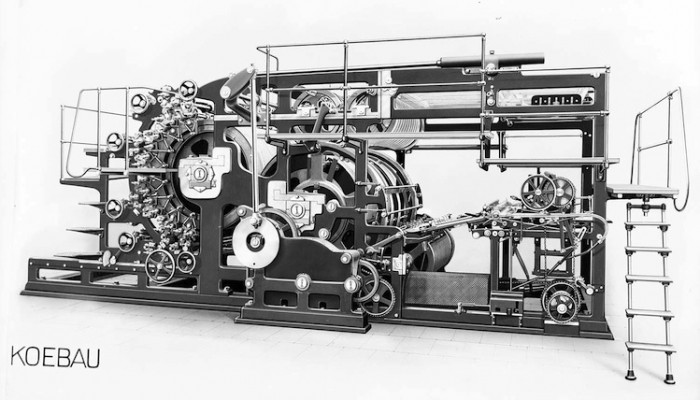 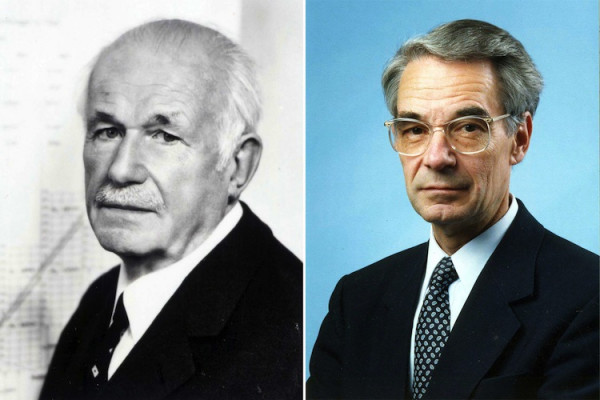 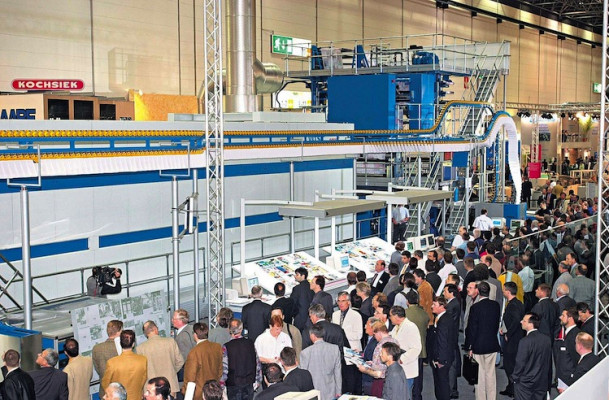 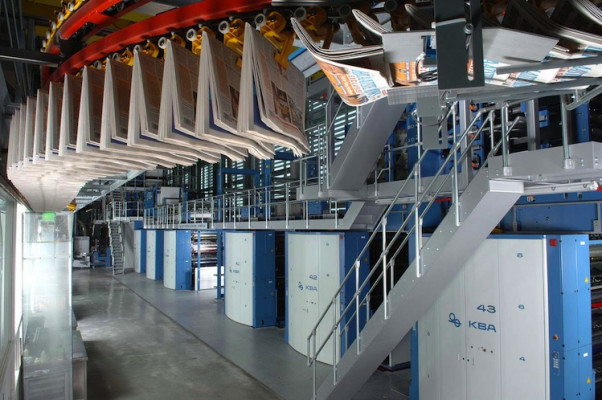 The revolutionary KBA Cortina heralded the trend towards compact newspaper presses after 2000. 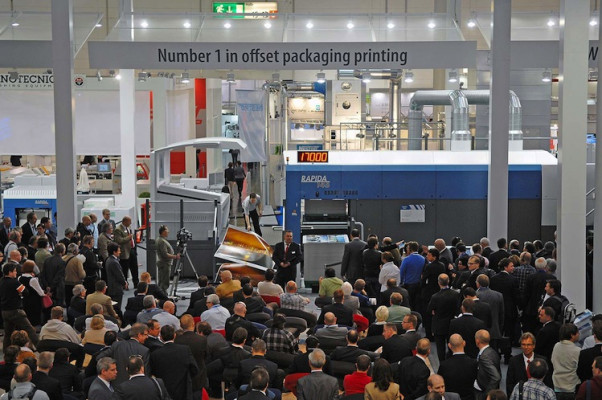 drupa 2012: New dimensions of performance in large format with the Rapida 145. 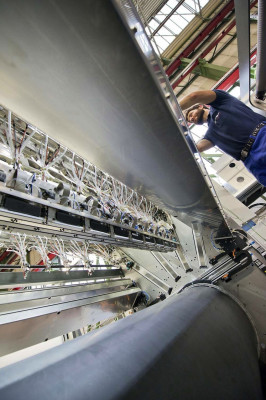 Koenig & Bauer builds the largest inkjet web presses in the world at its Würzburg factory.

In sheetfed offset, the Rapida 106 defines the benchmarks in medium format. 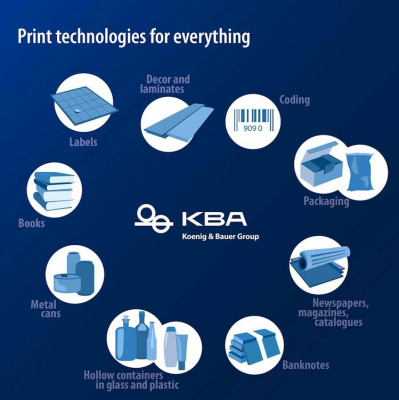 In August 2017, Koenig & Bauer AG (KBA) in Würzburg, Germany, will be celebrating its 200th anniversary. The world's first press-building workshop of 1817 has since blossomed into a globally successful manufacturing group with a unique portfolio of solutions for the printing industry. Anniversary festivities are planned from September 21 to 23 — an ideal occasion to review past achievements and to present the visions which will determine the company's strategy and market position in the third century of its history.

The times have certainly changed. In the early 19th century, Germany still lacked venturesome investors and a fertile industrial environment. It was not least for this reason that trained printer and untiring inventor Friedrich Koenig travelled to London in 1807 to realise his idea of a steam-driven printing press. While there, he met precision engineer Andreas Bauer, and in November 1814, The Times became the first newspaper to be printed on their double-cylinder press. This laid the foundations for printing on an industrial scale and for access to print media for a much broader section of the population.

Production in a Former Monastery

On 9th August 1817, Friedrich Koenig and Andreas Bauer signed a contract establishing Schnellpressenfabrik Koenig & Bauer in a secularised monastery in Oberzell near Würzburg, and in 1823, the Haude und Spenersche Zeitung in Berlin was the first newspaper on the European continent to be printed on presses from Oberzell.

Friedrich Koenig died in 1833. His widow Fanny Koenig and his former business partner Andreas Bauer continued his work. New presses were developed and the one-hundredth press was already delivered in 1838. A number of ambitious young workers moved away to found their own businesses. In this sense, Oberzell can be considered the cradle of German printing press manufacture. The company's foundation period came to an end with the death of Andreas Bauer in 1860.

The founder's two sons, Wilhelm Koenig and Friedrich Koenig Jr., developed new presses, modernised factory routines and introduced a series of social reforms. The sickness benefit fund founded in 1855 was followed by a factory savings bank in 1865 and by a factory training school, the precursor of today's vocational training centre in Würzburg, in 1868. The factory statute of 1873 defined the rights and duties of workers and managers and established a factory council ‒ employee participation already 140 years ago.

The first webfed press was supplied to a newspaper in Magdeburg in 1876. Wilhelm Koenig invented the variable web press in 1886, designed the first four-colour press in 1888, and began building special machines for the printing of luxury products. At the same time, he became very interested in securities printing, a field in which Koenig & Bauer was later to become technology leader. In 1895, the 5000th cylinder press left the factory.

From 1895 and through into the 1920s, the course of the company was shaped by Constantin Koenig and the founder's grandson Albrecht Bolza. In 1901, a new factory was built at the site today occupied by the company headquarters. The 225‑metre long production hall was one of the largest in Germany at that time. Webfed publication and rotogravure presses were manufactured, and the development of sheetfed machines was stepped up. Alongside printing presses, various matrix-moulding presses and plate-casting machines were delivered to customers all over the world.

After the First World War, Dr. Hans Bolza, a great-grandson of Friedrich Koenig, made a notable contribution to the mending of severed foreign business links. He was appointed to the executive board of the company when it was transformed into a limited company in 1920 and served as chairman of the board from 1931 to 1971.

Koenig & Bauer survived the period of hyperinflation in the 1920s thanks to the newly developed Iris collect press for coloured banknotes. In March 1945, bombs and artillery shells destroyed the Würzburg factories. Reconstruction began in 1946. After the post-war currency reform, Koenig & Bauer resumed business in 1949 with nominal capital amounting to DM 4.1 million.

Cooperation with securities printing expert Gualtiero Giori began in 1952. A further important milestone was the arrival of a talented young design engineer named Dr. Hans-Bernhard Schünemann, the son of a Bremen publishing family, in 1951. His first of over 250 patents was granted for a modification of the so‑called Maltese cross drive mechanism, which was subsequently used in another of his inventions, the sheetfed gravure press Rembrandt MT III. In 1959, Dr. Hans Bolza formally adopted Dr. Schünemann.

Dr. Bolza-Schünemann was himself president of Koenig & Bauer AG for almost 25 years from 1971 to 1995, and initiated the formation of the KBA Group from 1990. Executive responsibility was subsequently placed in the hands of his close partner and long-serving financial director Reinhart Siewert. After the turn of the century, he was succeeded by Albrecht (2003 - 2009) and Claus Bolza-Schünemann (since 2011), who thus represent the sixth generation of the founding family at the helm of the company.

Despite the growing offset competition in the 1960s and 70s, Koenig & Bauer retained the proven letterpress technology for its sheetfed and webfed presses for a relatively long time. Alongside the Rembrandt sheetfed gravure press and banknote presses developed together with De La Rue Giori, the two-revolution Condor and the Rotafolio sheetfed press for wrap-around plates were extremely successful all over the world.

High-performance in Sheetfed Offset Since 1974

In 1986, Koenig & Bauer launched the Rapida 104, a unit-type press designed for high flexibility and printing speeds up 15,000 sheets per hour. Production was transferred to the new subsidiary KBA-Planeta AG in 1992, sowing the seed for today’s high-performance sheetfed offset presses from Radebeul. The current Rapida 106, for example, has defined the benchmarks in medium format with speeds up to 20,000 sheets per hour, extremely fast job changeovers and configurations comprising up to 19 printing and finishing units.

Today’s large-format series Rapida 145 and 164 are the successors to the Rapida 142 and 162 presses which were developed jointly by the Radebeul design engineers and their colleagues from Würzburg in the 1990s. In printshops around the world, these high-performance large-format presses took the place of presses from other manufacturers and paved the way for KBA-Sheetfed’s leading position in large formats. This standing was confirmed yet again in 2003 with the unveiling of the Rapida 205, the world's largest sheetfed offset press.

In the same way that the Würzburg engineers ventured new approaches to webfed printing, the Saxon designers have repeatedly struck out on their own in search of simpler and more efficient sheetfed solutions. Two examples are the DI offset press 74 Karat with direct on-press plate imaging, which was developed together with Scitex from Israel in 1997, and its sister press Rapida 74 G from 2000. Both were equipped with short-train inking units for waterless printing. KBA remains strongly committed to this technology, which is especially interesting from the perspectives of print quality and environmental protection.

When it comes to innovative processes for inline finishing, ecological printing, direct printing on corrugated board or – most recently – LED-UV drying, KBA‑Sheetfed has regularly acted as a pioneer. The entry into the post-press market in 2016 and the announcement of the digital sheetfed press VariJET 106 at drupa open up further prospects.

The era of web offset presses from Würzburg began with the Commander in 1969. Over time, the still dominant satellite design principle was becoming increasingly complex. At the beginning of the 1990s, this trend was answered with the four-high tower presses Journal and Colora. Later, they were joined by the single-width series Comet and Continent. The less expensive four-high tower design appealed to many new international customers, and helped to establish the company as the number one in newspaper printing.

In this field, too, the Würzburg engineers have never shied the pursuit of new ideas. Already at drupa 1995, for example, visitors could admire an Anilox-Express with automatic plate changing and an imprinter with Scitex inkjet heads in the superstructure. It was shown adding a variable digital caricature to each offset copy. It was then almost 18 years, however, before the inkjet technology was actually used in practice in webfed offset presses.

At drupa 2000, a new trend towards compact highly automated newspaper presses was heralded by the KBA Cortina, which stood less than 4 metres high. Further features new to newspaper offset were the elimination of dampening units, four-high towers which glided apart for easy access, dedicated drives for each cylinder and the ease of operation with lifts to the upper couples of the tower. The same concept was implemented by the wet offset counterpart Commander CT in 2007. Both presses have remained unique on the market to this day.

Already in the early 1990s, the World Wide Web was taking its first tentative steps and new digital competitors entered the print arena. Faced with growing online competition, and especially due to the world financial crisis, the market for new webfed offset presses collapsed dramatically in 2008. Koenig & Bauer responded by turning attention to the digital process from 2011, and presented its first inkjet web press, the RotaJET 76, at drupa 2012. Today, with the RotaJET VL series for decor printing and the T1100 S manufactured on behalf of the American HP Corporation for the production of corrugated packaging, the largest digital web presses in the world are produced in Würzburg.

The company Koenig & Bauer went public in 1985. The acquisition of Albert-Frankenthal AG and of a majority stake in Planeta Druckmaschinenwerke in the early 1990s established a company group with a turnover of more than DM 1.1 billion. From the turn of the century onwards, the group management started a programme of diversification into market segments less affected by changes in the media landscape.

The acquisition of Swiss partner De La Rue Giori SA in Lausanne in 2001 secured KBA’s pole position in banknote printing. The purchase of Metronic GmbH in 2004 opened the door to the important market for industrial coding systems. The acquisitions of Bauer + Kunzi and LTG Print Systems, and the subsequent merger into KBA-MetalPrint GmbH in 2006, established KBA as the number one in metal decorating. And with KBA-Kammann GmbH as a global leader for the decoration of glass containers, alongside flexible packaging specialist KBA-Flexotecnica S.p.A, KBA has since 2013 further expanded its portfolio for the diverse packaging segment. A similar purpose was served by the takeover of Spanish die-cutter manufacturer Iberica in 2016.

This early diversification has helped KBA to master the structural upheavals which have rocked the branch much better than other press manufacturers. At the turn of the century, 60 per cent of the turnover from new press sales was still generated in market segments under pressure from the online media. Today, 90 per cent is accounted for by the growth markets digital and packaging printing and by securities printing.

Print Technologies for Every Eventuality

Through market-oriented capacity realignment, the introduction of a new group structure and a clear focus on future-oriented markets, structural changes implemented in 2014 and 2015 have prepared the oldest press manufacturer in the world to meet the challenges of advancing digitisation and globalisation.