With new orders up by around 33 percent KBA-Sheetfed Solutions currently profits from its strong position with folding carton printers and their current high investment sentiment.

WÜRZBURG, Germany—November 10, 2015—In the third quarter of 2015 the Koenig & Bauer Group (KBA) achieved the turnaround in earnings announced with continued good order intake. After nine months EBT came to +€2.1 million and the group posted a net profit of €2.4 million. In the company’s current interim report, the management board affirmed its outlook for 2015 again with annual group revenue of more than €1 billion expected and a planned EBT margin of up to 2 percent. At the end of September group order intake of €859.6 million was up 28.5 percent and order backlog of €597.3 million was up 36.6 percent year-on-year although the economic climate for the engineering industry has cooled in China and other key threshold countries.

The group’s largest segment, sheetfed offset, was able to compensate for the somewhat slower business with China with more orders from other regions, especially the U.S. and Japan. Compared to 2014, all business divisions posted a double-digit rise in the volume of new orders. In spite of some postponed deliveries KBA was able to increase its quarterly revenue over the summer to €252.8 million quarter on quarter. Nevertheless, at €679.7 million revenue for the full nine months was 14.2 percent down on the prior-year figure and clearly proportionally behind the annual target. The especially high-revenue fourth quarter of 2015 will contribute more strongly to achieving the press manufacturer’s sales and earnings targets with greater earnings contributions and a higher margin product mix.

Positive Results at KBA-Sheetfed Continue
The summer quarter solid order intake of €148.3 million in the Sheetfed Solutions segment exceeded the prior-year figure by 18.2 percent thanks to an encouraging volume of orders mainly from packaging printers. Over the entire reporting period, order intake rose by 33.1 percent year-on-year to €516.4 million. At €377.8 million revenue in this segment was up 1.7 percent on the previous year and will increase considerably in the fourth quarter. At the end of September, order backlog came to €320.1 million, up 70.1 percent on 2014. A good level of capacity utilization and progress with costs and prices led to an increase in segment result to +€10.1 million (2014: –€10.9 million). This positive earnings trend is expected to continue in the subsequent quarters.

Turnaround at KBA-Digital & Web in Sight
The volume of new orders rose in the reorganized Digital & Web Solutions segment by 47.4 percent to €89.9 million compared to 2014. Given low order backlog at the start of the year, after nine months revenue in this segment of €63 million was significantly below the prior-year figure of €93.8 million. In contrast, order backlog climbed from €61.9 million the year before to €77.8 million. Higher development costs for new digital printing markets hit earnings in the third quarter. The segment posted a loss of €12.2 million for the full nine months (2014: –€12.8 million). In the fourth quarter the KBA management board expects the turnaround targeted due to higher revenues and the sizeable reduction in costs resulting from the restructuring and capacity adjustment.

Higher Sales at Special Solutions in Q4
Orders for security presses, which increased significantly compared to the previous year, primarily drove order intake in the Special Solutions segment up 14.2 percent to €295.9 million. At €276.5 million revenue in this segment at the end of September was around €74 million lower than in 2014. KBA also anticipates a remarkable rise here in the fourth quarter. At the end of the quarter order backlog came to €214.5 million. Earnings were dampened by lower sales and the product mix delivered. Segment profit fell to €15.6 million compared to the prior-year figure of €51.8 million, which was boosted by high-margin security press projects. 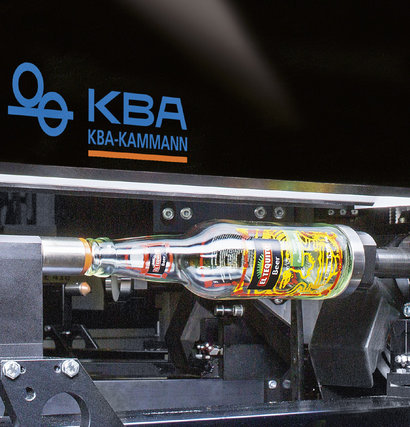 KBA supplies the diverse fields of package printing with a range of solutions. One special application is the direct decoration of premium glass packaging using screen and digital printing systems from KBA-Kammann.

Solid Balance Sheet and High Liquidity
Group results to Sept. 30 were +€2.4 million (2014: –€2.3 million), which corresponds to earnings per share of +€0.16. At –€28.6 million cash flows from operating activities were clearly below the prior-year figure of €32.9 million. The free cash flow came to –€27.8 million following €21 million the year before. Given reduced receivables and a rise in customer prepayments, higher inventories for the sales catch-up in Q4 and redundancy payments as part of personnel adjustments ultimately led to the cash outflow. Nevertheless, funds at the end of September 2015 stood at €183.4 million. Less bank loans, net liquidity was €166.8 million. The equity ratio rose to 24.1 percent.

Export Level at 85.4 Percent
At 85.4 percent, KBA’s export level was on par with the previous year (85.3 percent). Fewer web and special press installations led to a decline in the proportion of group sales attributable to other parts of Europe from 35.8 percent in 2014 to 29.4 percent. In contrast, North America’s contribution jumped from 10.1 percent to 14.1 percent and Asia and the Pacific rose from 24.2 percent to 33.6 percent. Latin America and Africa generated 8.3 percent of group sales.

Almost 650 Fewer Employees
At the end of September 2015 there were 5,285 employees on the KBA group payroll, 645 fewer than twelve months earlier. KBA is training 384 apprentices, among which for the first time are two asylum seekers from Pakistan. Excluding apprentices, employees exempted from their duties and staff on phased retirement schemes, the group workforce sank from 5,281 the previous year to 4,633.

Outlook for 2015 unchanged
The scheduled delivery of the large order backlog and the generation of the revenue planned in KBA’s individual business units for 2015 have priority at present. Special measures to cushion peaks in capacity utilization and increase output result in costs included in our earnings planning. However, the management board is confident that the targeted group revenue of more than €1 billion can be achieved by the balance sheet date.

As the market leader in folding carton printing systems, KBA-Sheetfed Solutions profits from increased investment activity in the packaging industry, economic recovery in Southern Europe and from growing success in the Group’s young markets, such as Japan. The largest KBA company will kick off the new year with more orders than twelve months ago.

The KBA management board expects a significant increase in revenue and a sizeable earnings improvement over the next quarters at KBA-Digital & Web following the elimination of capacity underutilization and a stronger focus on the growing digital printing market. Good market opportunities in digital decor printing and the alliance with HP in digital corrugated printing provide the division with considerably brighter prospects.

Revenue in the Special Solutions segment is also expected to increase in the fourth quarter primarily driven by KBA-NotaSys and KBA-MetalPrint active in banknote printing and metal decorating. Revenue gains planned in almost all of the company’s business units by the balance sheet date will have a significantly positive effect on group earnings.

Following a speedy implementation, the management board will complete the core of its restructuring program Fit@All at the end of 2015.

“The optimization of our product spectrum and the organization at our sites remain ongoing," President and CEO Claus Bolza-Schünemann said. "Sustainable profitability in all business fields is our highest priority for 2016, also in order to reduce the influence of cyclical and market-driven special effects in security printing on profitability further.”

The interim report can be downloaded here.