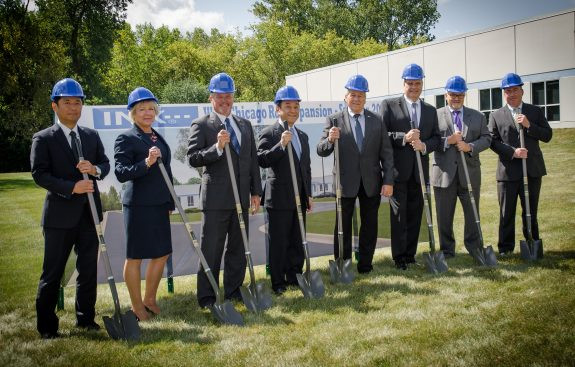 SCHAUMBURG, Ill. - October 10, 2017 - On opening day of the SGIA Expo in New Orleans today, INX International Ink Co. announced plans to expand its iconic Research & Development complex in West Chicago. When completed in July 2018, the facility will more than double its current space to 56,000 square-feet.

The new construction in West Chicago represents continuation of an aggressive, multi-year capital improvements program. INX opened a new manufacturing facility in Lebanon, OH in 2015, completed expansion of the metal decorating plant ln Charlotte, N.C. in 2016, and doubled the size of an existing manufacturing plant in Edwardsville, Kan., earlier this year. Parent company Sakata INX in Japan is following a similar path, building new or expanding facilities throughout Asia.

With an expected completion date of July 2018, the expanded R&D facility in West Chicago, will more than double in size to 56,000 square-feet of space.

Since the West Chicago R&D complex opened in 1996, overall activity and the number of chemists working on site has increased dramatically as a result of significant business growth, says Rick Westrom, senior VP of sourcing and R&D.

“We have experienced sales growth and production in many areas, and a major reason for this expansion is our commitment to global digital efforts. A large portion is being dedicated to growing and supporting digital products across all product lines, as well as expanding our Energy Curable technologies.”

Westrom indicated the $7 million project construction would add 32,000 square-feet to the facility. INX currently employs 62 people in West Chicago and will be adding more chemists after the new space becomes available.