When the State of Colorado’s Integrated Document Solutions (IDS) operation became the first government in-plant to install a four-color production inkjet press in 2015, it was a revolutionary move. Replacing three toner devices, that Ricoh InfoPrint 5000 MP let the in-plant add color to transactional documents for the first time and greatly increased the shop’s efficiency.

But inkjet technology has changed a lot since then, and the in-plant’s seven-year-old press is no longer the cutting-edge marvel it once was. Its “business quality” color is not good enough any more, and its 210-fpm speeds no longer seem so impressive.

So in February, the 59-employee Denver operation installed a new Ricoh Pro VC60000 continuous-feed inkjet press with a Tecnau Dynamic Processor TC 1550 in-line perforator, along with an off-line Tecnau Stack 5251 cutting/stacking solution. The press runs at a top speed of 492 fpm, with resolutions up to 1,200x1,200 dpi when running at 164 fpm.

“We just needed something a little bit faster and something that had higher quality,” explains State Printer Mike Lincoln.

He has seen an uptick in demand for long run postcards and higher-resolution products. Though the shop’s cut-sheet toner devices could provide that quality, they can’t handle runs of more than a million, so the in-plant has been forced to outsource those jobs.

“We wanted the ability to do those postcards in-house and do, essentially, a lot of higher-quality work in-house,” Lincoln says. (Watch a video of the State of Colorado's inkjet press and Tecnau finishing equipment.)

The main stumbling block keeping the shop from fulfilling this plan, he says, is the scarcity of paper.

“If we ask the mill to give us different substrates, it’s going to chew into our primary allocation of what we do in transactional,” Lincoln laments.

To be able to act quickly when paper becomes available, he had to work with state purchasing to raise the limit governing when paper orders need to be put out for bid. Still, there is work being outsourced that he intends to eventually bring in-house and print on the Ricoh Pro VC60000 once paper availability improves.

“With increased throughput, I have more capacity,” he says.

He also doesn’t need as many operators to produce all the shop’s work with inkjet.

“Because it’s essentially double speed, we don’t necessarily have to staff all three shifts for inkjet,” he notes. “It can sit idle for a shift.”

Employees can be redeployed to run the toner and wide-format devices or to process mail.

Lincoln praises the improved user friendliness of the Ricoh Pro VC60000 as well as its ability to let operators view pages as they are being printed using the Ricoh Pro Scanner Option. Captured page images can be replayed and zoomed in for close examination.

“We can actually see it on a monitor as the work is running through the press, just to verify that things are what they should be,” he says.

This ability, combined with the in-plant’s recent completion of the G7 certification process, have improved the quality of the shop’s output.

The Pro Scanner Option’s SmartStart capabilities can also help automate time-consuming tasks, such as printhead cleaning. Operators can schedule printer-preparation tasks — recurring or one-off, attended or unattended — to run when they fit into their workflow.

Though the shop’s previous InfoPrint 5000 MP had in-line sheeting on the back end, the Pro VC60000 runs roll-to-roll, with sheeting done off-line on the Tecnau Stack 5251. This decision was made to eliminate one of the pitfalls of in-line finishing.

“If the sheeter’s down, we don’t have to stop printing,” Lincoln says. IDS learned that the hard way when the sheeter was down for two days on the InfoPrint 5000 MP.

“We couldn’t print anything on the inkjet because of that,” he says.

Lincoln intends to use the in-plant’s higher-quality, faster inkjet capabilities to move into new markets. He has his sights set on personalized catalog printing, such as for state tourism catalogs. Instead of printing a million static catalogs, he envisions only a quarter of each catalog being printed with static information, and the rest custom tailored to each recipient, using the robust variable data capabilities of the Pro VC60000. 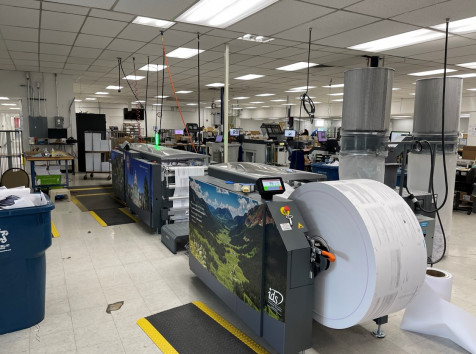 By doing cutting/stacking offline on the Tecnau Stack 5251, the in-plant can keep the new inkjet press running even if the post-press equipment goes down.

“I see a pretty significant opportunity for state government there,” he says, though he laments that “paper has delayed my ability to test.”

The inkjet upgrade is just one of several recent and upcoming technology changes for the in-plant. Last year, IDS added two new Quadient DS-1200 folder inserters to the two it was already using, along with a new DS-600i folder inserter. It’s currently working to implement the Avanti Slingshot MIS and expects to launch it in late summer. The in-plant also plans to add a rollfed inserter, so inkjet-printed rolls can go directly to an inserter, skipping the need to sheet and saving 50-60 minutes per roll.

Its early adoption of inkjet made Colorado IDS the leader in a nationwide shift to inkjet by government printers. At least nine state printing operations now have inkjet presses, the latest being the Oregon and Kansas state printers. Both directors consulted with Lincoln before making the move. And he has lots of experience to share. The best piece of advice, he says, is to prepare your facility well for the requirements of this new technology.

“Really make sure as you’re getting ready to place your machines you understand the ecosystem you’re putting it into,” he advises.

Even so, there may still be surprises, as he discovered when installing the Pro VC60000. The cost of HVAC upgrades, window replacements, and asbestos abatement was much higher than anticipated, he says. But it was worth the extra effort to have the new machine in place, he adds, and he encourages all in-plants to start looking into inkjet.

“With the advances in cut-sheet technology, even the smaller in-plants should consider inkjet. The larger in-plants, if they can find the paper, they should definitely consider looking at it, especially if they have sizable volumes,” he says — or service-level agreements that require very fast turnaround times. “When you’re thinking about printing equipment, if inkjet isn’t in the conversation, it needs to be.”

END_OF_DOCUMENT_TOKEN_TO_BE_REPLACED
Happening Today
The Powerful Case for US Book Manufacturing