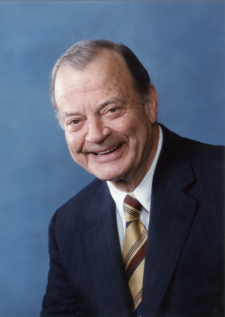 Mark Cooper Pope III, one of the printing industry’s earliest and most successful business consolidators, passed away on May 28, 2019 at the age of 94.

He is recognized as a pioneer in building multi-location networks of printing companies to achieve production efficiencies and economies of scale — a growth-by-acquisition strategy that continues to be pursued by the industry’s leading players today.

A visionary entrepreneur, Pope turned a small Atlanta printing business into a multi-state consortium that was listed on the New York Stock Exchange. According to an obituary published by the Pope family, the company, Graphic Industries Inc., eventually came to rank among the 10 highest-volume printing operations in the U.S.

Pope organized the company in 1968 and took it public in 1983. At its peak, Graphic Industries, Inc. encompassed 25 plants from Chicago to Texas, employed 3,500 people, and reached $500 million in sales, said Pope’s son, Mark C. Pope IV.

Pope, president of Graphic Solutions Group in Kennesaw, Ga., said his father concentrated on acquiring well-run companies in the $10 million to $25 million range, managing them in a hands-off manner and retaining their former owners as key employees. He noted that at the time, the industry was “ripe” for consolidation and that his father was one of the first to see the possibilities that lay in aggregating high-quality printing firms.

A contemporary, Norvin Hagan, CEO and founder of Geographics Inc. in Atlanta, acknowledged the groundbreaking nature of Pope’s achievement.

“There were a number of people who did roll-ups after him, but he started it,” Hagan said. “Nobody has done it better, before or since.”

“Trying to put management together for that many companies is incredibly difficult,” Hagan observed, adding that Graphic Industries also was one of the first networks to move work around its various production sites. “That’s not an easy sell, but they were able to do it,” he said.

Randolph W. Camp, a print company owner who later served as president and CEO of the Printing & Imaging Association of Georgia (PIAG), agreed that Pope was “a real trailblazer” of the concept. Prior to Graphic Industries, he said, “the idea of consolidation didn’t exist. It was quite a bold move, and it really shook the industry up.”

One of the things that made it all work, said Mark C. Pope IV, was his father’s insistence on transparency and mutual support among companies in the network. “We measured. We shared. Everybody saw everybody else’s P&L.” The opportunity to learn from one another, he said, was one of the main reasons why nearly all of the original owners stayed on for years after selling their businesses to Graphic Industries.

“He loved it. He had a passion for it. He was extremely persistent, and he had the drive and ambition to do it,” his son declared.

Mark C. Pope III was born in Washington, DC, on December 14, 1924, to Mark Cooper Pope Jr. and Nancy Braxton Pope. During World War II, he was commissioned as a U.S. Navy Ensign and assigned to a destroyer that took part in some of the largest and most significant battles in the Pacific theater.

After the war, upon graduating from the University of North Carolina with a degree in business, he started a number of non-print related companies in Atlanta. In 1949, he joined Williams Printing Company, a shop founded by his father-in-law, Jesse R. Williams, in 1922. After Williams’s death in 1955, Pope became the company’s president and spent the next decade building it into one of Atlanta’s leading printing businesses.

According to his son, Pope moved slowly at first as he launched Graphic Industries. “We didn’t buy just to buy,” he said, noting that Pope evaluated many more companies than he ultimately decided to invest in. “His advice always was, ‘Surround yourself with the best people you can find.'”

By the time it became publicly traded in 1983, Graphic Industries had reached $43 million in sales. Pope continued to broaden its footprint until 1997, when the company was acquired by Wallace Computer Services Inc.

PIAG predecessor Printing Industry of Georgia honored Pope for his outstanding contributions to the industry by presenting him with its Ben Franklin Award in 1981. He was inducted into the Printing Impressions/Rochester Institute of Technology Printing Industry Hall of Fame in 1992.

Active in civic life in Atlanta, Pope sat on the management boards of two local banks and belonged to numerous groups and clubs in the area. He published two books: a co-authored biography of his great-great grandfather, Mark Anthony Cooper; and an account of his wartime service aboard the destroyer USS Haggard DD-555.

Pope is remembered as much for his personal style as for his record in business. He was, according to Hagan, “a bigger than life character; a genuine people guy” who remains admired by everyone who knew him.

“He built a whale of a company,” Hagan said. “He accomplished so much.”