Industry Innovation in Action: A Look at Matrix Imaging Solutions 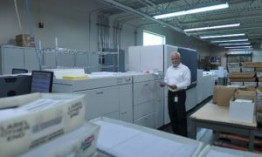 Located near Niagara Falls in Sanborn, N.Y., Matrix Imaging Solutions puts up to 150 million pieces into the mailstream every year in a 60/40 volume split between transactional documents and promotional direct mail. Alan Olivero, CEO, reckons that the company has mailed more than one billion pieces over the past 30 years — a period during which he has been waiting patiently for a solution that makes variable printing in color affordable, as well as efficient.

He believes he has found it in production inkjet, and his goal is to move three-quarters of Matrix’s volume to the technology as he phases out his dependence on overprinting static offset shells with variable data from laser devices — once the only workable option for documents and direct mail needing individualized content. Matrix still does some work of this type, but Olivero says that innovations in inkjet printing have brought the situation to a point where shells “don’t make any sense” for much of what his customers require.

Increasingly, inkjet does. A recently acquired Xerox Brenva HD cut-sheet inkjet press will be joined by a second Brenva now being installed, and these machines will share the workload with an Océ VarioPrint i300 sheetfed inkjet press from Canon Solutions America in the company’s digital press department. Olivero says that the Brenvas are affordable, very fast in simplex mode, and “forgiving and tolerant” of various kinds of stocks. He especially likes the Océ VarioPrint i300 for its integrated perforating unit and for its efficiency in high-volume duplex runs.

Olivero says that with the equipment he has now, he is already producing about 50% of his volume via production inkjet. There are no plans to decommission the company’s offset and flexo presses, but the outlook for conventional production, Olivero says, becomes “dimmer and dimmer all the time” as inkjet gets faster, better in quality and more economical to operate.

Matrix Imaging Solutions innovates in a different way by manufacturing its own envelopes — a practice that’s uncommon among direct mailers, according to Olivero. He made the decision about four and a half years ago after consolidations and shutdowns in the envelope segment left him feeling uneasy about future sources of supply.

Today, with the help of equipment from Winkler+Dünnebier, Matrix can make as many envelopes as it needs at speeds up to 1,400 pieces/hr. Olivero plans to sell his excess capacity to other envelope users in the region.