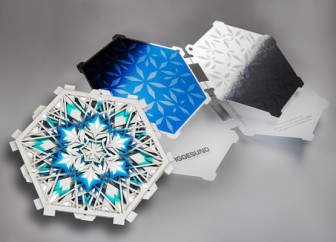 IGGESUND, Sweden — December 14, 2016 — Iggesund Paperboard’s tradition of producing sophisticated Christmas cards continues. One says every single snowflake is unique and so will the Christmas card 2016 also be. This year Iggesund has created a snowflake that can be folded in many thousands of possible variations, from crystal white to winter blue colors.

The card consists of seven die-cut snowflakes with each side printed with a different pattern. These 14 variations can then be folded to create more than 44,000 different patterns. The design is the brainchild of German designer Peter Dahmen, who in recent years has specialized in digital finishing, often together with Highcon, the inventor of digital cutting and creasing machines. The snowflake created by the card’s recipient then encloses a card made of Invercote Metalprint 359 g/m2 with shades of cyan printed on metal foil and the traditional Christmas greeting on the reverse side.

“Digital finishing is an exciting field and Iggesund’s Christmas card is one of the most sophisticated commissions I’ve done in this area,” says Peter Dahmen. “In theory the project could be done using traditional die-cutting tools but with an edition of this size that would be much more expensive because then you have to remove the excess strips of paperboard manually.”

“I got the idea for the card the night before I was to fly to Israel,” Dahmen explains. “I was having trouble getting to sleep but when the idea came to me I had to jump out of bed and write it down before it went out of my head.”

During the flight the next day he refined the drawings on his iPad and showed them to Eshel on arrival.

“When he said it could be done using Highcon’s process, the basics fell into place.”

Dahmen has worked both with digital and traditional die cutting and creasing and is very familiar with all the techniques. But he says digital technology makes it possible to do more fine adjustments at the last minute.

“After you get the cutting tool and see how it functions, you may realise your idea won’t work quite the way you’d thought, or that a few more adjustments would raise the quality of the end result. Then digital technology gives me as a designer greater freedom because usually there’s no time to wait for a mechanical adjustment to the cutting tool.”

Iggesund Paperboard’s motive for producing sophisticated Christmas cards is not only to send an elegant greeting to its customers.

“We’re actively looking for new solutions and techniques, or innovative uses of traditional methods, that can inspire our customers around the world. The Christmas card is a printed sample which shows what people can achieve with our paperboards, Invercote and Incada,” explains Iggesund Paperboard’s project manager Anna Adler, who has about a dozen such cards to her credit so far.

Learn more about the story behind the project here: iggesund.com/snowflake2016

The Best Four Words a Sales Rep Can Hear