Howard Graphic Equipment created an architectural display to celebrate 50 years of business and the history of offset printing.

OAKVILLE, Ontario - October 31, 2018 - In celebration of its 50th anniversary, Howard Graphic Equipment Ltd. has created a unique architectural display to also celebrate the innovators of the Modern Offset Press. Showcasing a single offset printing unit as an art form, is unique and now displayed in front of its printing history museum.

In 1904, American Ira Rubel stumbled upon a misprinted sheet. The mistake in Nutley, N.J., lead to the first modern offset press made by the Potter Printing Press Co. Followed shortly by the Hall Printing Press Co. and the Andrew H. Kellogg Co. All from New York and New Jersey.

During the first decade of the twentieth century, England’s George Mann, Waite & Saville and Crabtree would play pivotal roles in Offset’s development. Lest we not also pay homage, Germany’s Albert Frankenthal and VOMAG for some revolutionary designs knowing the future of printing was offset!

In 1906, the most famous of all, the Harris Automatic Press Company, would dominate the field for the next 70 years! 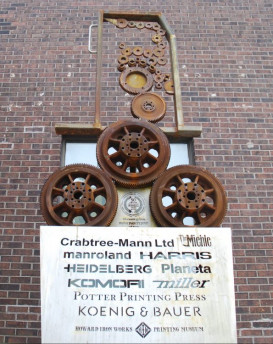 Others would join in and innovate. Miehle, Planeta, Miller and Faber & Schleicher would push the technology during the period of the 1920 to 1990.

Finally, the fruit of human’s efforts is on clear display today with manroland, Komori, Heidelberg and Koenig & Bauer providing breathtaking efficiency never dreamed of in 1904. 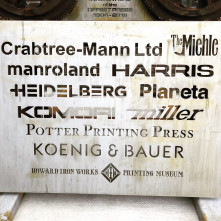 Over Howard Graphic Equipment Ltd.'s 50 years, it has had ringside seats to the remarkable changes that have taken place in our industry and is very grateful to have played a small role in bringing the offset press to over 75 countries and thousands of our own customers around the globe.

Here’s to 114 Years of the Offset and celebration of Howard Graphic Equipment’s 50th year in business.